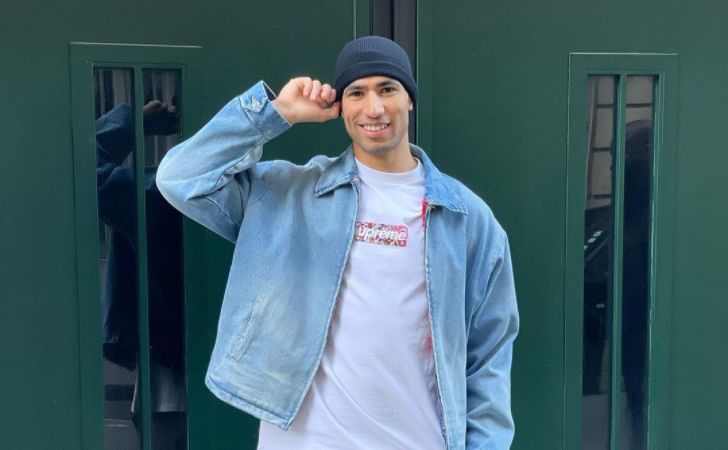 Moroccan right-back and right midfielder Achraf Hakimi is one of the technically gifted and quickest young footballers globally. Hakimi is quite famous as one of the promising young defenders of this generation. He plays for the French football club Paris Saint-German (PSG) after his transfer from Inter Milan football club in July 2020. The UEFA champions’ league winner defender has played in many major tournaments with different elite football clubs like Real Madrid, Inter Milan and PSG in his football career. Talking about his overall playing position, Hakimi can play excellently as a right and left midfielder but mainly as the right back.

Hakimi has played for his national football team for a long time after making his international football debut in 2016. This handsome footballer has won many major trophies like the Spanish league title and the DFL Super Cup trophy playing for different European clubs. Footballer Hakimi is widely regarded as one of the best-attacking fullbacks in football due to his acceleration, visionary passing skills, and pin-point crossing ability. This biography on PSG star Achraf Hakimi covers some of the important moments from his early life till date.

The CAF youth player of the year award winner young footballer was born to their father Hassan Hakimi and mother, Saida Hakimi. His parents were originally from Morocco, but they migrated to the capital of Spain, Madrid, when Hakimi was still a young boy. Footballer Hakimi also has one sister and a brother as his siblings in his family. His brother’s name is Nabil Hakimi, and his sister’s name is Widad Hakimi. Hakimi himself said that he has always been very close to his brother and sister since childhood.

The hardworking footballer child was soon recruited in the ranks of the local football club Colonia when he was a kid. In early 2006 he joined the youth football team of Real Madrid as he attracted interest from the Spanish football club. He played with number 2 on his jersey during his days at Inter Milan, who currently wears the number 19 at his present club, PSG. Likewise, he uses Hakimi as his name in his club and his national team kit during his career. Starting as a full back in his early playing days, he excelled at many midfield and defense positions.

Spanish league title winner Achraf Hakimi was born on 04-11-1998, making him 23 years old. (As per 2021) He follows Islam as the religion, and his Zodiac (horoscope) sign is Aquarius. According to his father, he played football with the children in their neighborhood. Delighted by his talent, his father took him to the football academy of Real Madrid, who was soon recruited in the youth team. Since then, Hakimi has been playing at a high level, making him one of the best players in modern football.

Hakimi has an athletic body and he stands 5.11 feet tall. He has blistering pace and acceleration, which helps his team during the counter-attacks. Achraf has evenly matched weight for a professional footballer, as he weighs around 169 pounds (77 kilograms) at normal. He has brown colour eyes and dark brown color hair. Hakimi is very professional and takes very care of his body, training, and diet. We do not have information about his body measurement. We will update the information soon. Moroccan young fullback Achraf Hakimi uses 11 (US) shoe size.

Achraf Hakimi Salary and Net Worth

Also known as “Arra” by his fans, Hakimi is estimated to be worth around 14 million dollars to date. He has played different clubs like Real Madrid, PSG, and Inter Milan. So, a major part of his net worth is due to football club salary, additional bonuses, endorsement, and sponsorship deals. He has made 46 appearances for his national football team after making his international football debut in 2016. Hakimi has also earned a significant salary playing for his national team.

Real Madrid signed footballer Hakimi at a young age and was later promoted to senior squad. Likewise, he was again signed by the Italian football club Inter Milan where he played for only one season. At his present club, PSG, he earns around 9 million dollars per season. This amount makes him one of the richest young footballers in the world.

Who is Achraf Hakimi Wife?

Footballer Hakimi is a Muslim by religion and he is a true believer in Allah. He is married to a woman he had known for a long time. Her name is Hiba Abouk, and she is a Spanish international. She is an actress and a model by profession. Hiba’s father was originally from Libya while her mother was from Tunisia. They fell in love with each other during his Real Madrid days.

They are parents to one son whose name is not available. Hakimi and his model girlfriend has a huge following on Instagram, Facebook, and Twitter. Hakimi takes very care of his body and training, making him one of the remarkable young football player.

PSG’s young full-back Achraf Hakimi is an intelligent and versatile footballer with beautiful trophy collections throughout his career. His crossing, defending and dribbling qualities make him one of the best football fullbacks. His blistering pace and acceleration helps his team to score the goals in the counter attack situations.

Hakimi has excellent crossing and passing skills, making chances for the strikers and defenders to head the ball into the net. Hakimi has won several major trophies like the UEFA champions’ league title and the Spanish league title in his career playing many big football clubs. In his professional football career, he has played mostly as a right-back, left-back, and sometimes as a left and right midfielder. Moroccan footballer Hakimi is famous as an excellent crosser in football.

Achraf Hakimi is also quite active on social media like Instagram and Twitter. He keeps updating the fans about the matches, and, his announcements. Hakimi posts pictures of his vacations in different places, family, and his teammates earning him huge fan followings worldwide. Footballer Achraf uploads pictures with his cars, watches and children on his social media.