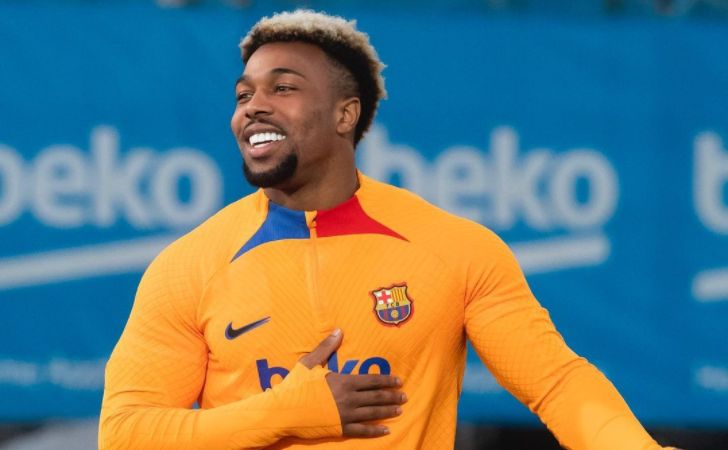 Former Wolves winger Adama Traore is well known as one of the fastest and most excellent dribbling players in football.

Spanish young football Traore plays for football club Wolves. In January 2022, Traore signed for Barcelona on Loan with the option for a permanent deal for around 25 million dollars. On 1st July 2022, footballer Adama returned to Wolves when Barcelona did not sign permanently.

Footballer Traore is a very versatile player who can play excellently as a winger but he is also comfortable as a central forward.

Footballer Adama is widely regarded as one of the finest attackers in football due to his speed, pacey dribbling, and shooting skills during the game.  This biography on a Spanish football player, Adama Traore Diarra some of the important moments from his early life till date.

Spanish international footballer Adama Traore was born to their father Baba Traore. His mother name is Fatoumata Traore. His parents were originally from Mali, but they migrated to Spain He was born to a poor family, so he did not have easy childhood while growing up.

Traore was born in De Llobregat, Spain. Adama also has a brother and a sister as his siblings. His brother is older than him, and his name is Moha Traore while his sister’s name is Asa Traore.

Delighted by his explosive speed and dribbling, he was soon recruited in the FC Barcelona’s football academy ranks. He played for the Barcelona youth team until 2015. He also played with the youth players of the local football club Hospitalet before he joined the La Masia Academy.

Traore played with number 20 on his jersey during his playing days at Aston Villa, and wears the number 11 jersey at his current club FC Barcelona. Likewise, he uses Adama as his name in his club and his national team kit.

Footballer Traore was born on 25-01-1996, making him 26 years old. Adama is one of the three children born to his parents. In terms of religion, Adama follows Islam.

Likewise, his Zodiac (horoscope) sign is Aquarius. Traore was very interested in this sport from his early childhood days. Adama is very famous for his speed and accuracy at dribbling against the one vs one situations in the match.

Traore has an athletic body and he stands 5 feet 10 inches tall. Footballer Adama has evenly matched weight for a professional footballer, as he weighs around 158 pounds (72 kilograms) at normal.

He has black color eyes and black color hair. Adama Traore is very professional and takes very care of his body, training, and diet to keep himself fit.

This footballer has a chest span of 39 inches and a waist of 31 inches. Likewise, his athletic biceps measure 15 inches and he uses a shoe size of 10 (US).

Adama Traore Salary and Net Worth

According to multiple sources, Adama Traore is worth around 12 million dollars to date. Adama Traore current market value is €14 million and €23 million.

Aston Villa signed him at a young age where he earned a signing bonus and salary according to his contract. Likewise, Adama was again signed by English football club Wolves in a mega-transfer deal worth around 16 million dollars.

As per our research, we think Traore is still single. We currently do not have any information about his girlfriend and her profession. We will update the information soon.

Adama Traore is a Muslim by religion and he has a very muscular body.

Likewise, we do not have any information if he has any children. He has a huge following on his social media accounts like Instagram, Facebook, and Twitter. He has an athletic body and can run very fast with the ball. Being a professional football player, he spends his significant time in gym and training making him one of the remarkable players. We do not have any information about his cars, property and sponsorship deal. We will update the information soon.

Adama Traore is widely regarded as one of the fastest football players globally. His versatility, shooting skills and pacey dribbling qualities make him one of the best forward in football. He is also very confident with the ball on his feet while running.

Recently, there was a news about Traore which was surprising. It was seen that he was using oil on his arm so that the opposition players cannot grab his hand while he is running.

Along with his speedy dribbling and rapid pace, he is also a strong player. The Spanish international footballer is also very good at crossing and passing the ball, making chances for his teammates to head the ball into the net.

He has played mostly as a winger and sometimes as the central forward in his professional football career.

Adama Traore is also quite active on social media like Instagram and Twitter. He keeps updating the fans about the matches, and, his announcements. Adama posts pictures of his vacations in different places, family, and his teammates earned him huge fan followings worldwide.

Footballer Traore uploads pictures of his cars, his vacation on social media.

Spanish international footballer Adama Traore has an overall rating of 78 in FIFA 22 games. Footballer Traore is one of the fastest players in the game. He is given his favorite right-winger position in FIFA 22 even though he can play better at the left wing. Being an attacker, he has the highest pace and dribbling out of other attributes. He has the highest 96 rating for pace and the lowest 38 rating for defense. His individual FIFA 22 rating for different attributes are:

Adama Traore follows the Islam religion.
Yes, Adama Traore is right-footed. Recently, he plays on the left therefore he can play with both of his feet.
Adama Traore can speak in six languages. He can communicate in Spanish, English, Portuguese, French, Catalan and Bambara.
Follow us and get the latest news delivered to your timeline!
Adama Traore
Previous ArticlePierre-Emerick Aubameyang Bio, Wife, Salary, FIFA 22, Cars, TwitterNext ArticleFerran Torres Bio, Age, Height, Girlfriend, Net Worth, FIFA 22, Instagram