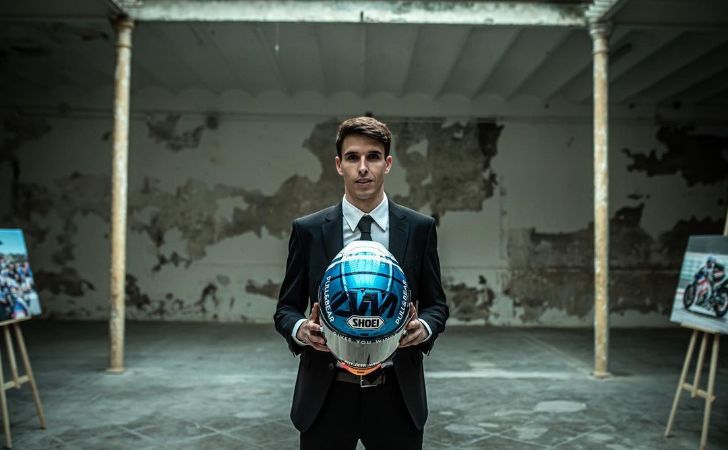 Alex Marquez is a Spanish professional road racer currently competing in Grand Prix motorcycle racing. He has a smooth riding style, which differs from his Brother Marc Marquez’s aggressive style.

In 2019, the Marquez brothers again won the championships in the same year. Alex won the Moto2 championship and Marc won the MotoGP championship. In the 2020 season, Alex was signed by Repsol Honda Team with his teammate being his brother Marc. In the 2021 season, he joined the LCR Honda Castrol team.

Alex Marquez was born on 23 April 1996 in Cervera, the capital of the comarca of Segarra, in the province of Lleida, the Autonomous Community of Catalonia, Spain. His father, Julià Marquez, worked as volunteers members of a local racing club known as Moto Club Serge. His mother, Roser Alentà’s work life is unknown, but she also volunteered in the local race club.

Alex Marquez has an older brother named Marc Marquez. Marc is also a Spanish professional road racer, who competes in Grand Prix motorcycle racing. Marc Marquez is considered one of the greatest road racers of all time. He has eight world titles, with six in the MotoGP class. As Marc grew up with bikes learning from his father, Alex was motivated and directed by his brother to become a professional racer.

Alex Marquez was born on 23 April 1996 in Cervera, Spain. He is 25 years old at the moment. His sun sign is Taurus. He is a smooth and controlled rider with 5 feet 10 inches (179 cm) and weighs around 68 kg. His is of the Christian religion.

His eyes and hair are dark browns. Alex shoe size and body measurements are under review at the moment.

Who is Alex Marquez Girlfriend?

Alex Marquez’s personal life is not properly known as he is a private kind of person and is truly focused on his career. Alex is currently single. However, Marquez might be in a relationship but the information is not available at the moment.

Alex Marquez is involved in various charity works. In the 2020 MotoGP World Championship, Alex and his brother auctioned their helmets with other items and gave the entire fundraise to Red Cross Respond Program.

He also helped Marc promote an initiative called laps for life 93 with Allianz Seguros. This project helps to improve the lives of people through associations and charities.

Alex Marquez currently uses the Honda RC213V, which is a Japanese motorcycle developed for road racing by Honda.

He rode KTM with Estrella Galicia’s 0,0 team and Kalex with EG 0,0 Marc VDS during his past seasons.

During the beginning of his career at the 2012 Moto3 Championship, he was with the Estrella Galicia 0,0 team and Ambrogio Next Racing team. Alex stayed with the team until the end of the 2014 season. In 2015, he moved up to Moto2 Championship with EG 0,0 Marc VDS. He stayed in the same class and team for 5 seasons. In 2020, he moved up to the MotoGP class joining Repsol Honda Team. In 2021, he joined the LCR Honda Castrol team.

Alex Marquez Salary and Net Worth

Alex Marquez‘s net worth is around $5 million as of 2022. His overall salary and net worth are from playing racing, sponsorships, and endorsements.