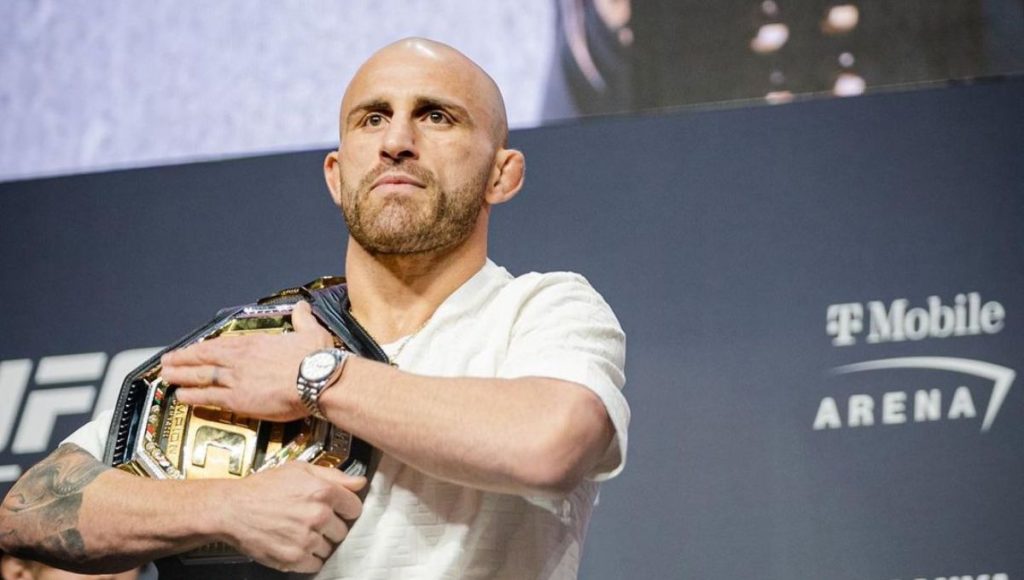 Alexander Volkanovski is a professional Australian MMA Fighter who competes in the Ultimate Fighting Championship. He is the current UFC Featherweight Champion.

Volkanovski is more of a fighter than a trash talker. During his pre-fight conferences, he tries to be less involved in trash talks as his trash-talking game is weak.

However, when he steps inside the Octagon, he becomes a beast. He has many accomplishments in his ongoing MMA career. He was champion in different divisions in different promotions before his UFC career.

So, if you like Alexander Volkanovski and want to learn more about him, please read the article below. As a result, let us get started right away with quick facts.

He started wrestling from an early age. At the age of 12, he won a national title. However, at 14, he decided to give up wrestling and focus on his career in rugby league. His rugby career wasn’t long as he was always in love with wrestling and fighting.

At 22, he realized his passion for MMA and started training with his local coach Joe Lopez. During the beginning of his MMA career, he competed in multiple amateur middleweight fights.

After years of practice and fighting, he moved down to welterweight, lightweight, and the featherweight division.

Alexander Volkanovski always had good grades in school. He attended Lake Illawarra High School in his teenage years. The High school is located in the Illawarra region of New South Wales, Australia.

He was a bright and physically strong kid. He won a national title at the age of 12. Despite his passion for multiple sports, he was never distracted from his studies. He finally graduated with good grades and joined his father as a concreter.

Volkanovski’s body measurements are 45-32-15.5 inches, and he wears a size 11.5 U.S. shoe. Volkanovski’s hair is light brown, and his eyes are dark brown. Volkanovski zodiac sign is Libra.

He has a strong mindset and has fought world-class fighters but has lost only once in his MMA career. Corey Nelson defeated him in Australian Fighting Championship.

Who is Alexander Volkanovski Wife?

Alexander Volkanovski married his long love Emma Volkanovski. The couple got married back in 2015. Emma is taller than Volkanovski as she is a huge fitness freak. She is 5 feet 9 inches tall. She completed her B.Sc in Physiology from the University of Sydney.

The couple has two beautiful daughters named Airlie and Ariana Volkanovski. They live together in Australia and Alexander Volkanovski has given them a secure and healthy life.

Volkanovski makes most of his money not just from fighting in the Octagon, but also through lucrative sponsorship deals and advertisements. CMBT, CBD UK, Sports Bet, Athletikan are current sponsors of Volkanovski.

His current form is really good and he looks like he will be a long-running champion. His salaries will grow in the future and will most likely have more sponsorship.

Volkanovski started his career from an early age. Before turning professional, he had a 4-0 record in the amateur middleweight division. He has fought in different MMA organizations. Wollongong war, Roshambo MMA, Cage Conquest are some of the promotions he has fought in.

On November 1, 2014, he won a title fight against David Butt in the Lightweight division of WW-Wollongong Wars 2.

On June 14, 2015, he had a featherweight title fight against James Bishop in the Australian Fighting Championship (AFC), where he won the title by TKO in the first round.

On December 4, 2015, he submitted Yusuke Yachi by triangle choke in the 4th round of the Featherweight title fight in Pacific Xtreme Combat 50.

Later in 2016, UFC announced that Alexander Volkanovski would sign a multi-year contract with the promotion.

Volkanovski made his UFC debut as a lightweight on November 26, 2016 against Yusuke Kasuya at UFC Fight Night 101. He won the fight with a second-round TKO. He announced that he would drop to the featherweight division in the post-fight conference.

On December 29 2018, at UFC 232, he won the fight against Chad Mendes via technical knockout in the second round. He won the fight of the Night award for this fight and went viral in MMA community due to his performance.

On May 11 2019, he faced Jose Aldo at UFC 237. The winner of this fight was supposed to fight for the featherweight title. He won the fight via unanimous decision.

On December 14, 2019 at UFC 245, he faced Max Holloway for the featherweight title. He won the fight via unanimous decision.

This was another amazing fight in UFC, and Volkanovski won via split decision. His win was controversial in the MMA community as many media sources and UFC fighters said Holloway won the fight.

On April 2 2021, it was announced that Volkanovski and Brian Ortega would be the couches for The Ultimate Fighter 29.

On March 5 2022 at UFC 272, Volkanovski was scheduled to fight Max Holloway for the third time. However, Holloway was forced to leave the fight due to injury. Chan Sung Jung replaces Holloway, and the title bout is moved to UFC 273 on April 9, 2022.

This was a co-main event and Alexander Volkanovski won the fight via split decision. This was a close controversial fight as the MMA community went hard against Volkanovski and went with Holloway for the win.

Yet another third fight, Volkanovski vs Holloway, is inevitable in the future and will sure be an exciting fight.

After being the coaches for The Ultimate Fighter 29, Alexander Volkanovski and Brian Ortega were set to fight in the main event for the Featherweight title on September 25, 2021, at UFC 266: Volkanovski vs Ortega.

Ortega gave Volkanovski a tough fight as Ortega had multiple submission attempts. Volkanovski was praised for his performance and won the fight of the Night award.

Alexander Volkanovski vs. The Korean Zombie.