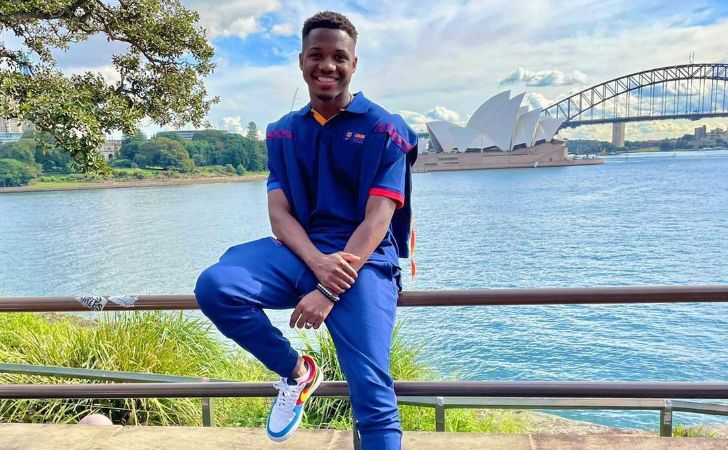 Ansu Fati is the rising star of modern football whose full name is Anssumane Fati Vieira. Currently, this young athlete is playing for the Spanish national team and Barcelona football club.

Before, reaching 19 years this player has already broken many records. Even, the greatest Lionel Messi hasn’t made this record in his first season at Barcelona. This athlete plays as a left-winger for the club and country.

At the same time, this athlete has already reflected his potential on the pitch. Therefore, expectations for this talented wonder kid are high.

The early life of Ansu Fati is way different from what he is living right now. Important to realize that this athlete was born in one of the poor country Guinea on 31 October 2002.

His father Bori Fati, was an ex-footballer. Meanwhile, his mother Lurdes was a housewife. Bori decided to emigrate to Portugal, he worked there as a taxi driver. After that, his family move to Herrera, Sevilla, when Ansu Fati was only 6 years of age.

For this reason, they moved to Sevilla because their eldest son Braima signed for Sevilla. For instance, Ansu also joined the youth academy of Sevilla in 2010. Especially, Ansu learned to play football in Sevilla.

Finally, On 20 September 2019, Ansu Fati received Spanish citizenship. Barcelona was Surprised by seeing his skills and ability in Herrera, Sevilla academy. At that time, he wasn’t even 10 years of age.

On the whole, it’s everyone’s dream to play in an academy as the great Lionel Messi has played. It was a good opportunity for this kid when he got the call from La Masia in 2012.

The winger performed exceptionally well, and he got the chance to represent the senior squad. Among very few players Fati is one of them who didn’t have to play for the Barcelona B team reserve.

Surprisingly, Ansu Fati was very close to joining the Real Madrid youth academy. In the end, he followed the footsteps of Lionel Messi.

To begin with, his dream of becoming a great player like Messi, Fati joined La Masia. At that time, he was only 10 years old. We know how much effort and dedication is required to become an athlete, as he is right now.

Sooner or later, Ansu Fati will be the best of the best football player in the world.

In the first place, he started playing football from an early age. So, there isn’t much information available about his schooling background. We can figure out, that he spent those times becoming the best Left-winger.

Besides this, there isn’t much information available about his education. Quickly, Playersaga will update the information as soon as it becomes available.

This Spaniard was born on 20 July 2002. As of now, he is 19 years of age. With this in mind, he was born in Bissau, Guinea. At this moment, Fati holds Spanish nationality.

Fati’s parents were from the African nation – Guinea. They are originally black. Being born in an African nation his ethnic group is also Black. Likewise, this winger is following Christianity.

A Scorpio zodiac sign player is strong, humble, and stubborn. This young player’s hair color and eye color are black. This Spaniard’s chest, hip, and waist measurements are 44, 34, and 38 inches, respectively.

Similarly, his biceps measurement is 16 inches. His body type is athletic and his shoe size is 9 Uk. According to our research, Chadwick Boseman and Brie Larson are his favorite actor and actresses.

This young player is the current Left-winger of Barcelona and the Spanish national team. At present, this player prefers to shoot with his right foot. Following the footsteps of some legendary player, Fati is handed jersey number 10.

Henceforth, playing the game wearing jersey number 10 is a proud moment for both club and country.

Although his potential rating in FIFA 2022 is 90, his overall rating is only 76. Fati, can run across the defender and score the goal. His acceleration is world-class.

This winger’s work rate is high\medium. Based on our database, this winger rating is listed below.

Even though, playing as a Left-winger his crossing, dribbling, and passing long are weak stats. Whereas, acceleration, agility, and sprint speed are his best stats. However, this player has just started his career and has many years to work on his weak stats.

Who is Ansu Fati girlfriend?

At the present time this athlete is just 19 years old. Currently, this Spaniard is focusing on his professional career. Rather than being in a romantic relationship, Fati is busy building his career.

On the contrary, this player hasn’t shared any information about his relationship. According to our research, this 19-year-old athlete is single now. Nevertheless, Ansu is handsome, caring, and charming. Without a doubt, several people is lining up to be his partner.

In other words, Ansu Fati is in a relationship with football. The great bond, rather call it greatest bond.

Net Worth | How much money does Ansu Fati have?

This La Masia product is earned from endorsements, sponsorship, and professional football. His contract at Barcelona will expire in 2022. Despite keeping Fati at the club Barcelona will surely purposed a new contract soon.

Notably, Fati will be the most valuable player in the world. This dope hairstyle player is already a millionaire before 20 years of age. It took 30 years for Barcelona captain Sergio Busquets to become a millionaire.

When it comes to business and superstars, representing your product is always good for sales. Thus, Ansu Fati is the brand ambassador of sportswear Nike. The contract details aren’t public yet.

This 19-year-old athlete has millions of followers on different social media platforms. Fati likes to share his achievements and training pictures on social media.

Ansu Fati has become a public figure and social media influencer before 20 years of age.

All in all, there are millions of people inspired by this wonder kid’s life. His social media links are below:

This 19-year footballer is one of the youngest players to play for Spain’s national team. Ansu Fati got world recognization in September 2020. He was just 18 years old when he was awarded a September player of the year.

Before joining La Masia at age 10 Fati played for local club Herrera. Eventually, this winger also played for the youth team of Sevilla.

This Spaniard signed his first professional contract with Barcelona on 25 July 2019. Fati didn’t have to play for the Barcelona reserve B team. He made his first club and La -Liga debut on 25 August 2019.

At 16 years of age, Fati scored his first goal for the club. The goal was against Osasuna which ended as a draw (2-2). Immediately, this winger broke the record and become the youngest player to score for Barcelona.

It didn’t end there, he also became the third-youngest player in the history of La-Liga to score. Quickly, this athlete made another record. On 14 September 2019, he score and provide a key assist in the same match. Ansu Fati was the youngest player to achieve this breakthrough.

Record after record, on 17 September 2019 Ansu Fati played his first Champions League game. When Ansu represents Barcelona in UCL against Borussia Dortmund, he was the youngest player to play for Barcelona in UCL.

Similarly, when this athlete was 17 years 40 days made another record. On 10 December 2019, Fati scored against Inter Milan which was the game-winning goal for Barcelona. This made him the youngest goal scorer in Champions League history.

On 15 October 2019, this athlete made his Spanish under-21 debut. His debut came against Montenegro. Before his performance, after a few days manager, Luis Enrique called him for the senior squad.

On 11 October 2019 finally, he was called for the national team. Sadly, on 7 November 2020, Ansu Fati suffered a knee injury. It was confirmed to have torn his meniscus. During that time, Fati was out for 9 months. Finally, on 5 August 2021, this player made his comeback for the training.

Follow us and get the latest news delivered to your timeline!
Previous ArticleKoke Bio, Age, Height, Net Worth, News, StatsNext ArticleGlover Teixeira Bio, Age, Next Fight, Gym, Net Worth, Wife