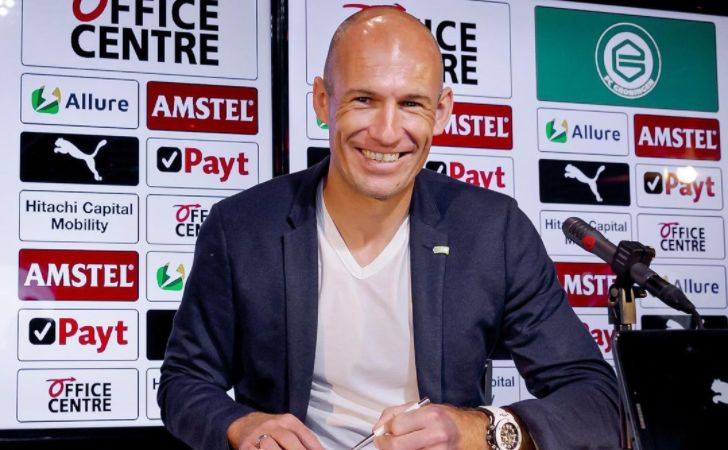 Arjen Robben is one of the best wingers in modern football who is considered a legend by FC Bayern Munich fans. He is also well renowned with the nickname “The Flying Dutchman or the man of glass”. Dutch international professional footballer Robben finally played for his boyhood football club Groningen before hanging up his boots in July 2021.

He is a very versatile player, who can play excellently at the forward position mainly as the wing. Dutch footballer Robben has played as right midfielder, Left midfielder, and winger (usual position) for most of his career. He has an excellent ability to control the ball with his feet and score from the long distance. Robben has played for his national team for a long time, earning his 96 Caps till date after his debut in 2003. He has won many major trophies (national and club level) in his career. He is widely regarded as one of the finest attackers of the game due to his intelligence, shooting skills, and versatility during the game. This biography on football star, Arjen Robben covers some of the important moments from his early life till date.

The champions’ league winner Dutch international was born to an ex-footballer father Hans Robben, and mother Marjo Robben. Both his father and mother are from Netherland. His father was former footballer which motivated Arjen to follow his footsteps. He used to play football with his father in their backyard in his early childhood days. Arjen has one sister whose name is Vivian Robben. He used to dribble and show his skills while playing in local tournaments. According to his parents, he would often play in the ground and his backyard with his friends during his early childhood.

The talented child was soon recruited in the ranks of the local club Groningen, and in early 2007 he joined the English football club, Chelsea, before finally moving to the FC Bayern Munich. Robben played with number 16 on his jersey during his days at Chelsea, who wore the number 10 at Bayern Munich. Likewise, he uses Robben as his name in his club as well as his national team kit. Starting as a winger in his early days, he has excelled at any position in the attack as well as the midfield. He is widely regarded as one of the finest player in this sport due to his intelligence, leadership quality, and versatility during the game.

Dutch international Robben was born on 2th January, 1984, which makes him 37 years old now. He follows Christian as the religion and his Zodiac (horoscope) sign is Aquarius. As per his father Hans Robben, he was always playing football with the children in their neighborhood. Robben has athletic body and, he stands 5.11 inches tall.

He has evenly matched weight for a professional footballer, as he weighs around 158 pounds (72 kilograms) at normal. Robben has blue-colored eyes and completely black hair. He is very professional and takes very care of his body, training, and diet. He has a chest span of 37 inches and a waist of 30 inches. Likewise, his athletic biceps measure 13 inches. Likewise, he uses shoe size of 10 (US).

Arjen Robben Salary and Net Worth

Also known as “The Flying Dutchman”, Robben is believed to be worth around 80 million dollars to date. Footballer Arjen has played different clubs like Real Madrid, Chelsea and Bayern Munich, so a major part of his earnings constitutes Football Club salary and additional bonuses. Similarly his other incomes are endorsement, and sponsorship deals. He played for his national team for 14 years, after his debut in 2003. He has also earned significant salary playing for his national team.

He received a signing bonus and salary for two seasons when he was signed by Chelsea back in 2004. Arjen spent most of his prime career at FC Bayern Munich where he was earning reportedly around 12 million dollars per season. He also earned from his goal and performance bonus from the club. This amount makes his one of the highest-earning players in modern football. He also owns multiple extraordinary cars in his collection.

Who is Arjen Robben Wife?

Dutch international Robben is a left-footed player and is very excellent dribbler and long shot specialist. Robben is married to a woman whom he has known for a long time. Her name is Bernadien Eillert. The couple fell in love with each other since they were kids.

She is also a Dutch international. The couple are also parent to two sons whose names are Luka Robben and Kai Robben one daughter whose name is Lynn Robben. He is also known as a funny guy in his team as per his ex-teammates from Bayern Munich. He has huge following in Instagram, Facebook, and twitter.

Arjen Robben is one of the intelligent and versatile footballers having beautiful trophy collections throughout his career. His unique style, long shot skills and dribbling quality makes him one of the best winger in football. His partnership with Bayern Munich teammate Frank Ribery was a joy to watch during their prime. The duo was also called as robbery as their nickname. He has won several titles and trophies in his career playing for Spanish, German and English clubs.

The Treble winner has excelled at midfield as well as the attacking position. Footballer Robben has good passing, crossing, and shooting abilities, making him an all-round footballer. He has played as Right midfielder, Left midfielder, Left-wing, and Right-wing, in his career in professional football. He is famous for his curved long range goals in football.

The champions’ league winner Dutch international is also quite active on social media like Facebook, Instagram and Twitter. He keeps updating the fans about the matches, and, his announcements. Robben posts picture of his vacations in different places, family, and his teammates earning him huge fan followings around the world. He is one of the funny players having a good sense of humor.