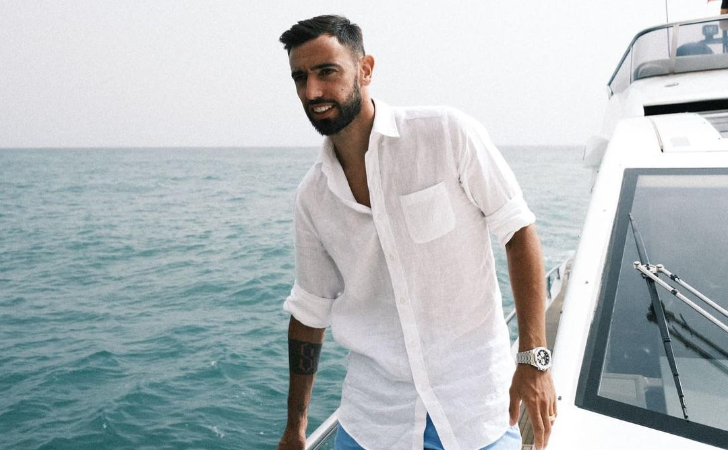 To begin with, Bruno Fernandes is a Portuguese mid-fielder and playmaker in football. Currently, the young mid-fielder plays for Manchester United and the Portuguese national team. Fernandes is well-known for his playmaking, goalscoring, leadership, and penalty-taking qualities.

Moreover, Portugal has given football the very best players like Cristiano Ronaldo. Bruno can also be seen as one of the best players following the track of Ronaldo. The midfielder’s move to Manchester was one of the most talked about gossip.

In this article, we are gonna explore the never heard truth about the star defender together. Let’s move to our topic without any delay.

Though much information about Bruno’s early life is not given anywhere. We have discovered some information about him. The star midfielder was born in Maia, Porto, Portugal. Moreover, his birth name is  Bruno Miguel Borges Fernandes.

Furthermore, Bruno used to play football in the streets with his brother Ricardo.  Bruno refused to move to Switzerland with his father due to the standard of football in Switzerland.

The United’s box-to-box midfielder has already tied his knot with his sweetheart Ana Pinho on 23rd December 2015. These love birds are now married for 7 years and are living their great life.

Moreover, this perfectly matched duo is even blessed with a daughter named Matilde Fernandes. The couple welcomed their baby daughter on 31st January 2017.

This amazing United midfielder has an amazing height. Hence, Bruno stands at an impressive height of 5 feet 10 inches and weighs 75 kgs. Hence, Bruno has a magnificent height to be a football player.

Moreover, the star player’s other physical attributes include his brown eyes and hair. Furthermore, the player’s zodiac sign is Virgo.

While, speaking of Bruno Fernandes, we can agree that it’s a familiar name to every football fan. This star player came into the limelight after his contract with Manchester United.  Actually, Bruno signed a lucrative contract with United worth 55 million pounds.

Currently, the Portuguese International is earning 180k pounds a week from his contract. Likewise, the player also has annual compensation of 9.36million pounds with The Reds.

Now, the net worth of Bruno Fernandes is 20 million pounds. However, the figure is estimated to rise in upcoming years.

Bruno likes to be fast both on and off the field. Hence, we can consider his love for cars as his hobby. Currently, the famous midfielder has some of the eye catchy cars in his garage. Henceforth, without delay let’s have a look at the player’s car collection below:

Now, speaking of his property, the player currently owns 2 houses back in his home country. One of his houses is located in Lisbon and another one in Porto. However, the full details about the whereabouts of his house are not available.

Eventually, Bruno currently is under contract with Nike. However, other than Nike there are no other deals of endorsements by Bruno Fernandes.  Furthermore, this player wears Nike Mercurial Vapor Boots.

Hopefully, we wish to see more of the endorsements and deals by the amazing United midfielder.

This famous penalty taker began his football journey from the local club Infesta. After playing for some time in Infesta, Bruno was offered a contract by Porto. However, the Portuguese international turned down the offer and signed with their rival Boavista.

Fernandes spent most of his youth career playing for Bovista as a center-back. Eventually, he turned into an attacking midfielder in 2015. After spending some seasons with Bovista, the player packed his bags and farewelled his youth team.

Bruno’s next stop was Novara, Italy. The mesmerizing player joined the Italian club on 27th August 2012. The first few months were hard for Bruno as he suffered from homesickness and was having language barriers. However, after a season with Novara, Bruno went on to join Udinese in a co-ownership deal.

Furthermore, on 16th August 2016, Fernandes’ move to Sampordia was to face a new challenge and learn even more about the Italian league. After some years with the Italian teams and their style of play. Fernandes made a move back to his home and signed with Sporting CP.

Eventually, Bruno was back in the Portuguese league after some experience. Sporting CP signed him on 27th June 2017 on a five-year deal. This deal was worth 8.5 million pounds. Furthermore, the player’s first season at the club was a success.

Bruno went on to score 16 goals and bashed 20 assists and was named Primeira Liga Player of the Year. Furthermore, Bruno’s amazing performance in the UEFA Champions League group match was his highlight of the year.

Moreover, the 28-year-old footballer’s final goal of the season helped Sporting CP to win Taca de Portugal’s final against Porto. Eventually, Bruno was again awarded the Primeira Player of the Year award for the 2nd successive year for his amazing performance.

29th January 2020 can be marked as one of the special days for this player. On this day the star player was signed by Manchester United. Moreover, the club and player agreed on a five-year contract deal worth 55 million pounds.

However, this lucrative contract included 25 million pounds as add-ons and 10% profits from his transfer amount if Manchester ever sells him.

Furthermore, the player’s 2019-20 season with United was filled with positive outcomes and magnificent performances. Moreover, Bruno was voted as the Premier League Player of the Month on 16th March.

Moving forward to the next year we can be clear Bruno’s goal and assist tally were on the rise. In the season 2020-21 Bruno ended his season with 18 goals making him the 3rd highest goal scorer in Premier League.

On 1st April 2022, the attacking midfielder signed a new contract with United till 2026. Furthermore, Bruno scored his 50th goal in United’s shirt on 2nd May against Brentford.

Although Bruno gave his best, the club finished sixth in the points table for the 2021-22 season which made the fans furious. This result of the club made them qualify only for the Europa League.

Despite Bruno being the top assist provider in UEFA Champions League 2021-22, United failed to qualify for the next campaign. Though Fernandes gave his best, Football is won by teamwork. So, this incident indicates the overall poor performance of Manchester United.

This box-to-box midfielder has worn Portugal’s shirt since his youth age. Moreover, he also has taken part in various competitions as a youth player. Further, the player was named captain of the under-21 team by coach Rui Jorge before his senior team debut.

Beyond these Fernandes has also represented Portugal in the 2016 Summer Olympics. Portugal reached the quarter-finals of the competition. Henceforth after all these successes as a youth player, Bruno finally won his 1st cap on 10th November 2017.

Then, this quick midfielder was selected by Fernando Santos for the 2018 FIFA World Cup. Moreover, Fernandes’s first WorldCup match was against Spain, which ended in a draw.

Hence, now due to his magnificent performances from time to time, Bruno has become a regular player of the Portuguese squad.

Here, are some of the lists of the tournaments Bruno won along with his teams:

Further, some of his individual awards include:

Bruno’s overall FIFA rating is  88. Moreover, his position is at CAM. Further, his details regarding the FIFA rating are provided just down below:

Up to July 2022, Bruno was wearing Jersey with no. 18 on his back. However, the box-to-box midfielder changed his jersey number and started wearing no. 8 on his back.

Moreover, his love for Jersey no.8 dates back to his Sporting CP days, when he wore the same jersey number. Further speaking his love for no.8 is a tribute to his birth date and his father.

When we speak of goal celebration gestures, it might vary from player to player. In the same way, Bruno also has his own unique celebration style. The Red midfielder celebrates his goal by covering his ears with both of his hands.

Further, the celebration is a tribute to his daughter Matilde, who covers her ears pretending not to hear him. Hence, Bruno is a family guy. We can all count on that.

The box-to-box defender is currently available over various social media. However, the major social sites used by this Portuguese International are mentioned below:

Currently, the Portuguese International is earning 180k pounds a week from his contract with the United. Furthermore, the player also has annual compensation of 9.36million pounds with The Reds.

The net worth of Bruno Fernandes is 20 million pounds. However, the figure is estimated to rise in upcoming years.

Follow us and get the latest news delivered to your timeline!
Bruno Fernandes
Previous ArticleMost overrated players for World Cup 2022Next ArticleTop 5 Underrated Midfielders for Worldcup 2022