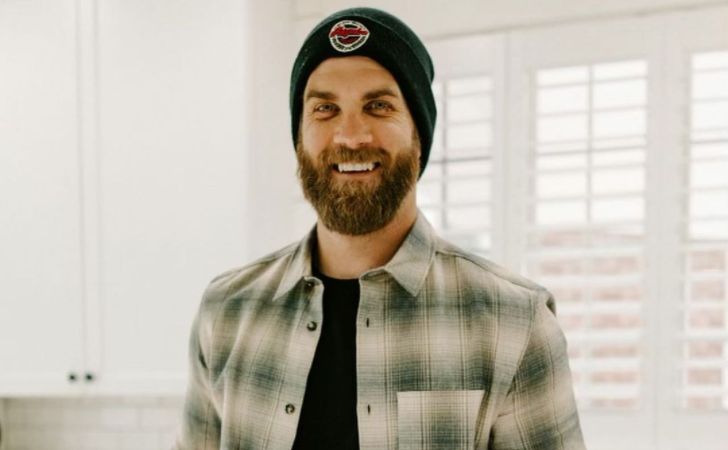 Nicknamed as “The five-tool player” by the fans, Bryce Harper is a professional baseball player currently in the books of Philadelphia Phillies of Major League Baseball (MLB), a prestigious baseball league in the world. As for his position in the field, he is plays in the right fielder position of the pitch. He played seven seasons for Washington Nationals before moving to the Philadelphia Phillies as a free agent in 2019. His new whopping amount of contract makes him one of the highest-paid athletes in the world.

The 29-year was born in Las Vegas, Nevada, USA. His full name is Bryce Aaron Max Harper, and he was born on 16th October 1992. Starting as an active rookie, Harper has established himself as one of the best baseball players in Major League Baseball (MLB). The six-time MLB all-star is a left handed player. He is one of the best right fielder the MLB has ever seen. Bryce is widely regarded as one of the best in the sport due to his intelligence, and versatility during the game. This biography on MLB star Bryce Harper covers some of the important moments from his early life till date.

The six-time all-star was born to a lovely couple, Ron Harper and Sheri Harper, and his father was an ironworker. He has an older brother Bryan Harper who plays as a baseball pitcher. His brother is one of the reason how he fell in love with baseball when he was a kid. According to his parents, he would often pick up a baseball bat, and play in the ground and his backyard with his friends during his early childhood. The American International continued playing baseball in his school and the high school team.

Even during his college days, he made a new college record when he scored 31 home runs. He was also awarded SWAC player of the year for achieving that record. Bryce also participated in the National Junior College Athletic association, where his brilliant display in the whole tournament earned him the Golden spike award. He made a professional debut for a baseball team Washington Nationals. He played seven seasons from 2012 to 2018 for Washington Nationals before moving to the Philadelphia Phillies in a mega deal worth million dollars.

The American international was born on 16th October, 1992, making him 29 years old. Bryce follows Christian as the religion and his Zodiac (horoscope) sign is Libra. As per his father, Ron Harper, he would often pick up a baseball bat, and play in the ground and his backyard with his friends. Delighted by his talent, he was recruited to play in his college team’s National Junior College Athletic association. Since then Bryce has been playing at a high level, making him one of the best players in this sport.

Alaba has an athletic body and, he stands 6 feet 2 inches tall. Baseball player Harper has evenly matched weight for a professional sportsperson, as he weighs around 209 lbs (95 kilograms) at normal. He has hazel blue colored eyes and light blonde hair. Bryce is very professional and takes very care of his body, training, and diet. He has a chest span of 42 inches and a waist of 30 inches. Likewise, his athletic biceps measure 16 inches. Likewise, he uses a shoe size of 14 (US).

Bryce Harper Net worth and Salary

The six-time MLB all-star made a professional debut for a baseball team Washington Nationals, where he played seven seasons from 2012 to 2018. He had many offers from other clubs after the 2018 season. According to Harper, he wanted to play for a single team for the rest of his career. That may be why he made a 13-years deal with the Philadelphia Phillies. When he became a free agent in 2019, Philadelphia Phillies approached him to sign a whopping deal for the tenure of 13 years.

The deal is expected to be of value a staggering amount of 330 million dollars. For 2019 only, multiple reports state that his salary was 10 million, excluding an additional performance bonus. This amount makes him one of the highest-paid defenders in modern football. Harper himself is also a car enthusiast. He is a proud owner of multiple expensive and best cars in his collections like Mercedes-Benz, Jaguar F-type, and a custom-designed 69 Camaro model.

Who is Bryce Harper Wife?

Bryce got married to his high school girlfriend, Kayla Varner in 2016. They met each other when Kayla was going to Ohio state university, and both of them fell in love later and started dating in 2012. Varner used to play soccer during her school days just like her husband.

She also helped her school win the Nevada state championship in soccer during her school days. She has a huge following in Instagram, Facebook, and twitter. Both Harper and Varner are dog lovers as they revealed it themselves. The lovely couple is the parent to a son named Krew Aaron Harper and, a daughter named Brooklyn Elizabeth.

Bryce Harper is a professional baseball player currently in the books of the Philadelphia Phillies of Major League Baseball (MLB), a prestigious baseball league globally. As for his position in the field, he is plays in the right fielder position of the pitch.

He was even touted as “The best hitter” at just the age of 12, and instantly caught of scouts worldwide. Harper was recruited to play in the National Junior College Athletic association from his college team at an early age.

Bryce keeps updating the fans about the matches, and, his announcements. Similarly, Harper posts pictures of his vacations in different places, family, and his teammates, earning him huge fan followings worldwide. His wife, Kayla Varner also has a huge following on Instagram, Facebook, and Twitter.