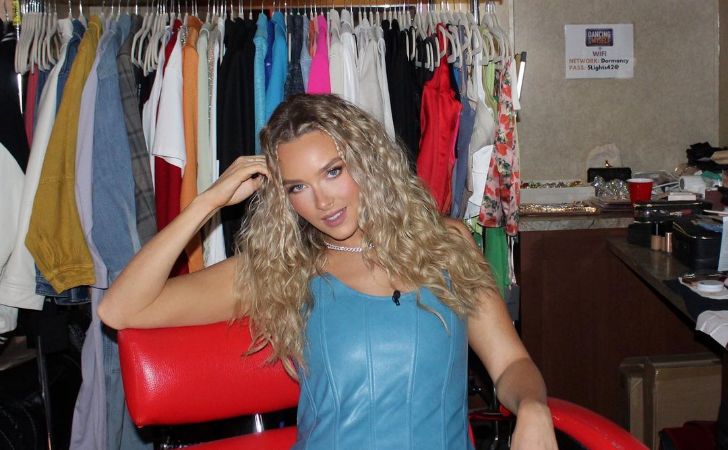 American TV host Camille Kostek is the wife of the well-renowned American Football player, Robert James Gronkowski. Her husband is one of the most decorated NFL players, having won many trophies and titles in his professional American Football career. He has played for two NFL teams in his professional career, namely the New England Patriots and the Tampa Bay Buccaneers. The American NFL player has been named to the Pro Bowl five times with the different National Football League (NFL) franchises he has played. The New England Patriots picked him in the second round of the 2010 NFL draft.

Likewise, he has also made many NFL records playing with his current American Football team. American Football player Robert Gronkowski has also won four Pro Bowls titles (a prestigious achievement in American football) in his career with the New England Patriots and the Tampa Bay Buccaneers. Robert and Camille are sometimes seen together at sports events and award distribution ceremonies. Camille sometimes attends her husband’s football matches in the NFL to support his football team. Camille is a TV host and a model by profession.

As a result, she has a massive fan following on her Instagram account. Being the wife of a celebrity, she tries to keep her personal life private.  This short biography on star American Football player Robert Gronkowski’s wife, Camille Kostek, covers important moments from her early childhood days to date.

American model Camille Kostek was born in Killingworth, USA. Camille’s parents raised her well with their other three children. She was born to their mother, Christina Kostek, and father, Allan Kostek. Her father was a normal contract worker by profession. Christina’s mother was a fitness instructor and a gym coach in her earlier younger days. Camille Kostek also has a brother and two sisters as her sibling in the family. Her only brother’s name is, Thomas Kostek, and two sisters’ names are Julia Kostek and Alina Kostek. At the moment, we could not find any details regarding her sibling’s age and his profession. We will try to update the data if we find any information.

Kostek is close to her brother and sisters, so sometimes, she uploads pictures with him on her Instagram account. As for her educational background, she has completed her secondary-level education at the Haddam Killingworth high school in her hometown. Since her childhood days, Camille has participated in dancing and other school functions. She was enrolled in ballet classes when she was four years old. Likewise, she has attended a well-renowned University to complete her graduation. She went to Eastern Connecticut University, where she continued further studies.

Camille Kostek also joined the same university’s cheerleader team due to her love for sports. She even hosted some of the TV programs while she was still a young girl. Camille Kostek has a bachelor’s degree from Eastern Connecticut University in her hometown.

American international Camille Kostek was born on 19th February 1992, making her 30 years old. (As of April 2022). She practices Christian religion, and her Zodiac (sun) sign is Pisces. She usually keeps her long hair and has a curvy body as a professional athlete’s wife. As per our research, Kittle does not have any tattoos inked on her body. She stands 5.7 feet tall at present, a good height for a woman. At the moment, we do not have any information about her weight.

The data will be updated as soon as it becomes available. Camille Kostek has green color eyes and blonde color hair. Camille takes very care of her health by working out in the gym and doing home exercises. She takes care of her daily diet to maintain her physique and body figure. Being a professional model, her usual diet includes foods, like Avocado, fruits, salads, and fat-less foods. Camille and her husband are sometimes seen working out in the gym in the Instagram pictures and videos.

We do not have information about Camille Kostek’s body measurement and her shoe size at the moment. If the details are available, we will update the information.

Camille Kostek Salary and Net Worth

According to multiple sources, American TV presenter Camille Kostek is worth around 3 million dollars. (As of April 2022) As of now, we do not have any details about her salary. We will update the data if it becomes available. At present, Camille Kostek is a model and an actress by profession. She has a massive fan following on Instagram, where she uploads her pictures and videos. Writing this article, she has more than a million followers on her Instagram account.

The fitness lover American model has a large audience following her social media posts. She has made endorsement earning for representing the brands such as Benrus and Dune. Likewise, the Instagram model has also been featured in the TV advertisements of companies like Nissan and Vinyl. Camille also makes her significant income by promoting products on her website and Instagram. Likewise, her husband, Robert Gronkowski, is worth 22 million dollars.

He is one of the wealthiest American Football players in the National Football League (NFL) without a club at present. He has played for the richest franchises, such as the New England Patriots and the Tampa Bay Buccaneers. Camille and Robert previously owned a 1.5 million dollars’ worth mansion in their hometown. Robert is also a proud owner of expensive cars in his collection, such as Bentley, Lamborghini, and Rolls Royce.

Who is Camille Kostek Husband?

Camille Kostek is a happily married woman. American TV presenter Kostek is married to her long-term boyfriend, Robert Gronkowski. The lovely couple is yet to have children together. Camille and Robert revealed that they met each other while in their University for graduation. They have been very close to each other since their first meeting. They both attended the Eastern Connecticut University in their hometown, where the pair first met. There lived near to each other in the University residence and were casual friends initially.

The couple first met as a friend before they started dating. Camille’s husband is a professional NFL player rewarded with many individual honors. He plays in the tight end position with the American football team. Robert is one of the famous American football players in the National Football League (NFL) who is without a club at present.

The New England Patriots picked him in the second round of the 2010 NFL draft. Gronkowski has won the Super Bowl four times in his professional American football career. He has also been named to the Pro Bowl five times, a prestigious individual achievement in the National Football League (NFL).

Camille Kostek is also quite active on social media, like Instagram. She also follows many celebrities, American football players, and sports personalities through her Instagram account. Camille is sometimes seen in various vacation spots with her husband. Her social media presence is as follows: