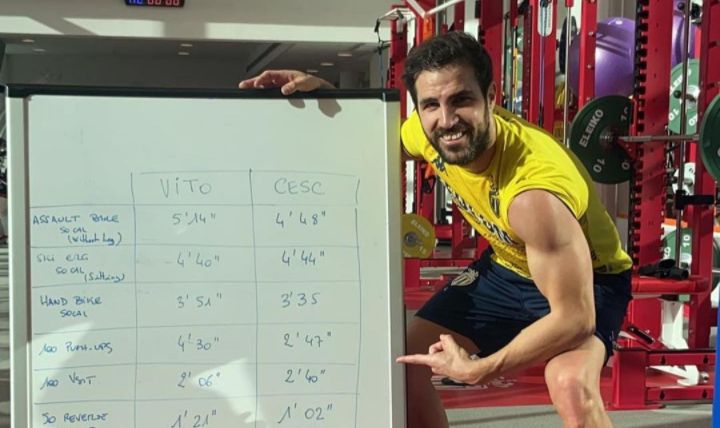 Cesc Fabregas is a Spanish professional football player who plays for the French football club AS Monaco after his transfer from Chelsea in 2019. He is well renowned for passing and crossing skills, he is one of the finest and skilled midfielders in Football.

He has played for many big football clubs like Arsenal, Chelsea, and Barcelona and his national team Spain for a long time. Footballer Cesc is a very versatile player who can play excellently at the midfield as well as the attacking position. Footballer Fabregas has played as a right midfielder, Left midfielder, center attacking midfielder, and mostly as the center midfielder position.

His full name is Francesc Cesc Fabregas Soler. Spanish international Fabregas has played for his national team for a long time, earning his 110 Caps till date after his debut in 2006. He has won multiple major trophies (national and club level), including the UEFA Super cup title and the FIFA world cup. He is widely regarded as one of the game’s finest players due to his intelligence, dribbling quality, and Versatility during the game. This biography on football star Cesc Fabregas some of the important moments from his early life till date.

Spanish international Cesc Fabregas was born to father Francesc Fabregas Senior and mother, Nuria Soler.  He was very shy when he was a child. Fabregas’s father worked as a laborer while his mother was a housewife. He did not have easy childhood as he was from a middle-class family. He is a very good friend of Spanish footballers Xavi and Iniesta, and they played together for many seasons. According to his parents, he would often play in the ground and his backyard with his friends during his early childhood.

He often used to play in local tournaments and surprise the audience with his skills. His family was an FC Barcelona fan from the very beginning. He also played for the local football club CE Mataro for a few years. His father later took him to La Masia, Barcelona’s academy for a young footballer. He later joined Arsenal football club academy as he thought he would have a limited chance at FC Barcelona. Likewise, he used number 4 in his national Jersey and Fabregas as his name in his club and his national team kit. Starting as a defensive midfielder in his early days, he excelled at many midfield positions like central midfield and center attacking midfield.

Cesc Fabregas was born on 4th May 1987, making him 34 years old now. He was born in Arenys de Mar, a place in Spain, and his full name is Francesc Cesc Fabregas Soler. He follows Christian as the religion, and his Zodiac (horoscope) sign is Taurus. As per his father, he played football with the children in their neighborhood. Delighted by his talent, his father took him to the Barcelona academy, where he became a world-class player. Since then, he has been playing at a high level, making him one of the best players in modern Football.

Fabregas has an athletic body and, he stands 5.10 feet tall. He has evenly matched weight for a professional footballer, as he weighs around 168 pounds (76 kilograms) at normal. Likewise, he has dark brown colored eyes and dark brown color hair. He is very professional and takes very care of his body, training, and diet. Even at 34, he performs very solid at the midfield, which makes him a crucial part of the squad. He has a chest span of 42 inches and a waist of 33 inches. Likewise, his athletic biceps measure 13 inches. Likewise, he uses a shoe size of 10 (US).

Cesc Fabregas Salary and Net worth

According to multiple sources, Cesc Fabregas is worth around 45 million dollars to date. He has played for the clubs like Arsenal, Chelsea, FC Barcelona, and now AS Monaco, so a major part of his earnings constitute Football Club salary and additional bonuses, endorsement, and sponsorship deals. The world cup winner has played for his national team for a long time, earning his 110 Caps until his debut in 2006. He has also earned a salary from his national football team.

When he signed for Barcelona, he went on to win major trophies like the UEFA Super Cup and the Spanish domestic league title La Liga. He has made significant earnings in salary and performance bonus while at the club.

At AS Monaco, he earns around 9 million dollars per year. It is believed that the veteran midfielder will sign the contract extension with his current club when his contract expires. The 34-year old Spanish midfielder has many properties and real estate investments in Spain. He also has multiple expensive and fine cars in his collection.

Spanish international Cesc Fabregas follows Christian religion, and his Zodiac sign is Taurus. He is married to a woman whom he has known for a long time. Her name is Daniella Semaan. She is the ex-wife of the billionaire businessman. Daniella divorced her husband to live with the love of her life. She is sometimes seen attending her husband’s football matches.

The couple is also parent to one son, whose name is Leonardo Fabregas, and two daughters whose names are Lea Fabregas and Capri Fabregas. His children are were born in 2013, 2015, and 2017 respectively. He has a huge following on Instagram, Facebook, and Twitter.

The world cup and European championship winner Fabregas is one of the intelligent and versatile Footballs having beautiful trophy collections throughout his career. His unique style and versatility make him one of the best wingers in Football. Football pundits and fans also call him a football magician. He has excellent dribbling and shooting skills.

Cesc is also very good on one vs. one against the goalkeepers. He has several awards in his career, playing for Arsenal, Chelsea, and Barcelona. The Euro and world cup winner has excelled at midfield as well as the attacking position. Fabregas has good passing, crossing, and shooting abilities, making him an all-around footballer. He has played as Central midfielder, central attacking midfield, Left-wing, and Right-wing in his professional football career. He is famous as an excellent free-kick taker in Football.

The veteran midfielder is also quite active on social media like Instagram and Twitter. He keeps updating the fans about the matches and his announcements. He posts pictures of his vacations in different places, family, and his teammates, earning him huge fan followings around the world. His girlfriend also has many followers on her social media accounts like Twitter and Instagram.