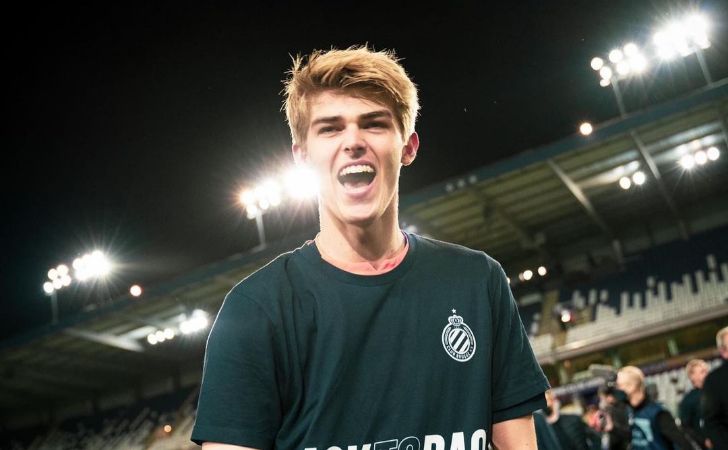 Not only De Ketelaere has been recognized for his incisive progressive passes, and confident prolific dribbling, but also for his contributions to defense.

Similarly, he also has a great long shot, an eye for goal, and is tactically versatile.

The Belgian midfielder, Ketelaere was brought to this world on 10th March, 2001 in Brugges, Belgium. Thus, he is currently 21 years old.Further, He was born to his mother, Isabelle De Cuyper, and his father (the name under review). Currently, he is living with his mother.

However, he grew up with his brother, Louis De Ketelaere, and his sister, Renee De Ketelaere in Bruges, Belgium. During his childhood, he often used to play tennis with his sister Renee, who is now a professional tennis player. However, he developed a preference for football over tennis.

Starting off, this Belgian midfielder has a fantastic physique. In terms of height, he stands at 6 feet 3 inches tall and weighs approximately 79 kg or 174 lbs. Similarly, Ketelaere has an athletic physical appearance. Also, his hair is blonde, and he has dark brown eyes.

Charles, on the other hand, is a Pisces, which tends to mean that he is emotionally fragile, hardworking, courteous, and emotionally observant.

Furthermore, Pisces is considered to be one of the most compassionate zodiac signs, and they might go to great measures to ensure the happiness of those around them. They are also innovative and creative. Additionally, Ketelaere seems to be of Belgian nationality.

Previously, the Belgian attacking midfielder studied law in his high school in Sint-Lodewijkscollege, Brugge, Belgium. However, like several other sportsmen, his education deteriorated as his football career took off.

However, he stayed at Brugge Academy for about 11 years and played with the B team. Additionally, he also worked as a ball boy for the academy. Eventually. after witnessing his growth in games, Club Brugge promoted De Ketelaere to the senior squad in 2019.

To begin with, De Ketelaere made his senior team debut for Club Brugge on 25th September, 2019, playing the complete game against Francs Borains in the 2019-20 Belgian Cup.

Accordingly, he made his Champions League first appearance against Paris Saint-Germain on October 22, 2019. He played the game from the beginning but was substituted in the 57th minute; the match ended in a 5-0 defeat.

Nevertheless, he scored a goal in a 2-1 win over Zulte Waregem on 5th February, 2020, to proceed toward the Belgian Cup Final.

Overall, the Belgian attacking midfielder has appeared in 120 games for Club Brugge and Managed to score 25 goals while assisting 20 times.

Prior to making his senior international debut, De Ketelaere also had represented Belgium in the under-16, under-17, under-19, and under-21 championships.

However, De Ketelaere made his international debut as a substitute for the senior team on 11th November, 2020, in a friendly match against Switzerland.

Furthermore, the Belgian midfielder scored his first international goal for Belgium in their 2-1 loss against Italy in the Nations League third-place playoff match on 10th October, 2021.

Overall, De Ketelaere has appeared 8 matches for the Belgium national team and managed to score 1 goal.

Is Charles De Ketelaere Married? Does he have Children?

Charles De Ketelaere is not married yet. However, The Belgian midfielder is currently dating Jozefien Van De Velde.

Further, De Ketelaere uploaded their picture together on Instagram in March 2020. In addition, this couple’s relationship is expectational till now and hope it will remain as same in the future too.

However, pertaining to De Ketelaere’s sexual orientation, he is straight.

Charles De Ketelaere has a FIFA 22 overall rating of 77. Meanwhile, his potential rating is 87, and his best position on the field is CAM (Center Attacking Midfielder).

What is the Net Worth of Charles De Ketelaere?

As of 2022, the Belgian attacking midfielder reached an agreement with Club Brugge on a contract worth £884,000 per year. Additionally, Charles de Ketelaere net worth is estimated to be £1,448,200. However, the Belgian midfielder has a market value of 30 million euros.

Additionally, this footballer generally posts about the matches, family, vacations, and endorses brands through social media.

Belgian Promising Talent of the Year: 2020

Ketelaere can play both midfield and forward.

De Ketelaere is not married yet, however, he is currently dating Jozefien Van De Velde.