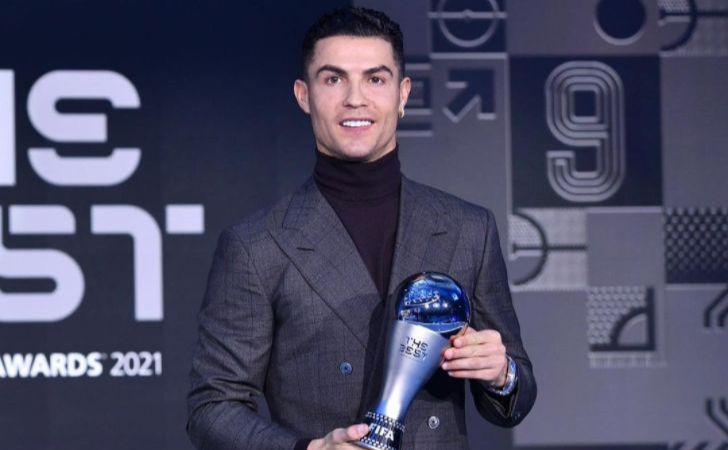 One of the greatest Portuguese footballer of all time, Cristiano Ronaldo is hailed one of the most reliable goal scorer in football. He has achieved a lot in this sport as a result of his hard work and determination. Ronaldo’s fame has earned him millions of fans around the world as he is the most followed athlete on Instagram. The five times balloon D’or winner striker plays for English football club Manchester United after his transfer from Juventus football club. He has won the UEFA champions’ league for five times with two different football clubs. Ronaldo has played most of his games as a left winger but he also lethal in front of goal as a striker.

Ronaldo has helped his club team and national football team to win multiple trophies. The Portuguese footballer is also all time international top scorer after making his international football debut in 2003. Growing up in poverty, the iconic former Real Madrid winger has established himself as one of the greatest footballer of this generation. This biography on Manchester United legendary forward Cristiano Ronaldo covers all of the important moments from his early life till date.

Cristiano Ronaldo was born to their father Jose Dinis Aveiroro and mother Maria Dolores dos Santos Aveiro. Maria was a cook and he she raised her children when her husband died due to Cancer. Ronaldo was born to a poor family in a place in Portugal called Madeira. He also has one brother and two sisters as his siblings. His brother’s name is Hugo Aveiro while his two sister’s names are Katie Aveiro and Elma Aveiro. Ronaldo worked very hard since early age to achieve his dream of becoming a successful footballer. The Portuguese striker was also the heart patient in his childhood age which he overcame later.

Ronaldo was more interested in football than study according to his mother. His father was a kit man while he was still alive. So he also played few years for the youth team of the club, CF Andorinha where his father worked. Ronaldo used to play football with his brother and father sometimes when he was young. Ronaldo was brilliant in dribbling and shooting which caught the eyes of the scouts from Sporting CP. He spent around five years playing for the youth team of Sporting CP.

The five times UEFA champions’ league title winner Portuguese striker was born on 05-02-1985, which makes him 377 years old now. (As per 2021) He is a Catholic by religion and his Zodiac (horoscope) sign is Aquarius. Ronaldo is one of the most popular athletes in the world. He is the most followed personality on social media platform Instagram. Cristiano Ronaldo is also well renowned as the nickname, “Roonie” and CR7” around the world.

Ronaldo is undisputedly one of the fittest football player for his age. He has an athletic body and stands 6.1 feet tall. Ronaldo has evenly matched weight for a professional footballer, as he weighs around 179 pounds (81 kilograms) at normal. He has hazel brown colour eyes and black color hair. Cristiano Ronaldo spend his significant time in the gym and in his personal physical training. He has a chest span of 42 inches and a waist of 33 inches. Likewise, his athletic biceps measure 14 inches and he uses a shoe size of 13 (US).

Also nicknamed as “Roonie” by his former teammates, Cristiano Ronaldo is believed to be worth around 500 million dollars to date. He has played for many richest football clubs like Manchester United, Real Madrid and Juventus in his professional football career.  Therefore his current net worth comprises of salary, bonuses and other incomes earned playing for those clubs. He has also made 184 appearances for his national football team until now after making his international football debut in 2003. So, the Portuguese striker has also earned a significant salary playing for the Portuguese senior football team.

He was signed by Manchester United at an early age where he also earned huge signing bonus. Ronaldo made most of his fortune at Real Madrid where he earned higher salary and had excellent merchandise deals. Likewise, Ronaldo was earning around 35 million dollars in net salary while he was playing for Juventus. At his present club Manchester United, he earns around 25 million dollars per season. Ronaldo is one of the richest athlete in the world’s sport history. Likewise, he is also a fan of super cars. Ronaldo has many expensive cars in his collection like the Rolls-Royce, Ferrari, Bugatti Chiron and Bentley.

Who is Cristiano Ronaldo Wife?

Cristiano is one of the most reliable goal scorers currently playing in the world’s top five football league. The Portuguese forward has lethal finishing skills inside and outside the box. He can head the ball very well and he is capable of scoring goals from a long-range. His partnership with Gareth Bale and Karim Benzema at his Real Madrid CF days was considered as one of the best-attacking trios in the world. They were also nicknamed as BBC together. Cristiano has won almost every major club trophy a footballer has to win including the UEFA Champions’ league, UEFA Super league and the FIFA club World Cup.

Ronaldo has been phenomenal as the left winger in his career but he has played good even as the striker. The five times champions’ league winner is famous as an excellent free-kick and penalty taker in football. The Portuguese footballer is the all-time international top scorer in football after he made his international football debut back in 2003. He has scored 115 goals for his national football team in 184 matches.

The superstar footballer is the most followed person on Instagram. Likewise, he also has a huge following on his Facebook and Twitter account. Ronaldo uploads a picture of him training in the gym with his son Cristiano Junior. Cristiano Ronaldo is also a family man. He is seen uploading pictures while spending vacation with his girlfriend and his kids. Ronaldo’s model girlfriend Georgina Rodriguez also has a huge following on her Instagram account.

Cristiano Ronaldo has an overall rating of 82 in FIFA 22 games. He is given striker position in FIFA 22. Being a midfielder, he has the highest dribbling and shooting out of other attributes. He has a 93 rating for shooting and the lowest 34 rating for defending. His individual FIFA 22 rating for different attributes are: