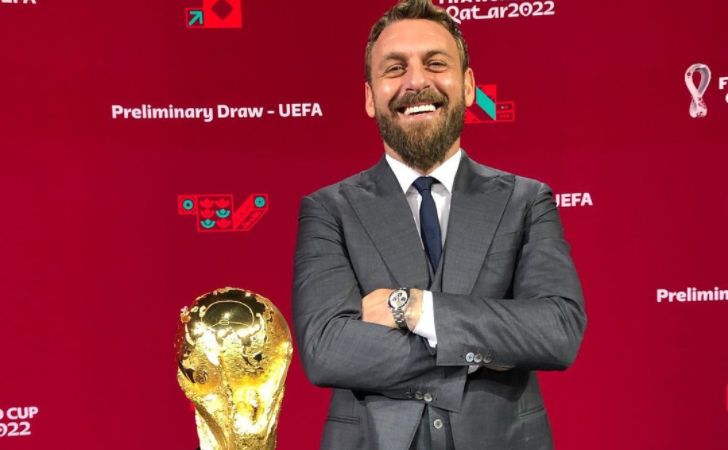 Legendary Italian former midfielder Daniele De Rossi is a versatile and leading player in football. He is quite famous as one club player as he spent most of his professional football career playing for the Italian club AS Roma. He played with other iconic footballers like Francesco Totti while he was at AS Roma. De Rossi currently holds the prestigious position of technical collaborator in his home country’s national team. He was also nicknamed “Capitan Futuro” in his professional football playing days.

Talking about his overall playing position, he could play excellently as a central midfielder but mainly as the central defensive midfielder. De Rossi has played for his national football team for a long time after making his international football debut back in 2004. Footballer Rossi has won many major trophies like the Copa Italia Trophy and the Supercoppa Italiana trophy playing for AS Roma. This biography on AS Roma’s former footballer Danielle De Rossi covers some of the important moments from his early life till date.

Italian former midfielder Daniele De Rossi was born to their father Alberto De Rossi and mother, who is unavailable. His father was a former player of the Italian football club AS Roma. Thus, Daniele De Rossi was very much interested in football from an early age. He was born to a self-sufficient family in Italy called Rome. He also has one sister whose name is Ludwica De Rossi. According to his parents, Rossi would often play in the ground and his backyard with his school friends during his early childhood.

Daniele De Rossi was introduced to the Roma football club’s youth team as a defender. Footballer spent just one season as a youth player in the team. He played with number 16 on his jersey during his whole professional career with AS Roma football club and the Italian national football team. Likewise, he used De Rossi as his name in his club and his national team kit during his career. Starting as a midfielder in his early playing days at AS Roma, he excelled at many midfield positions.

Italian Cup and Italian Super Cup winner De Rossi was born on 24-07-1983, making him 38 years old. (As per 2021) Rossi follows Christian as the religion and his Zodiac (horoscope) sign is Leo. Daniele De Rossi was considered as the leader while playing for AS Roma. His leadership quality earned him the nickname “Capitan Futuro” in his old football playing days with the Italian football club. The Italian former midfielder also has multiple tattoos on his body. The different tattoos on his body carry a different meanings. De Rossi also has a tattoo warning about being tackled, the Italian character is famous for.

De Rossi has an athletic body and he stands 6 feet tall. He has evenly matched weight for a former professional footballer, as he weighs around 178 pounds (81 kilograms) at normal. He has blue colour eyes and dark blonde colour hair. Rossi is very professional and takes very care of his physical body, training, and diet even at 38. Currently we do not have any information about his body measurement. We will try to update the information soon.

Also known as “Capitan Futuro” by his former teammates, Danielle De Rossi is worth around 20 million dollars to date. The Italian spent 18 seasons with AS Roma after making his debut in 2001. He earned a salary and performance bonus while playing for the Italian football club. Rossi made 117 appearances for his national team after his debut in 2004.

Footballer Rossi has also earned a significant salary playing for his national team. At AS Roma, he averaged 6 million dollars per season in his prime playing days. Rossi also owns multiple extraordinary cars in his collection, such as the Mercedes.

Who is Danielle De Rossi Wife?

The FIFA World Cup winner Italian international former midfielder was previously married to a woman named Tamara Pisnoli. Things did not work out well for them and the couple got divorced in 2009. De Rossi and Pisnoli have a beautiful daughter together whose name is Gaia.

De Rossi is currently married to a woman whose name is Sarah Felberbaum. She is a model by profession and she is also from Italy. They are parents to one son named Noah and a daughter whose name is Olivia. The Italian international and his model wife have a huge following on Instagram and Twitter. Rossi has an athletic body and being a former professional footballer, he spends his significant time in gym and training.

Danielle De Rossi is one of the intelligent and versatile footballers to have ever played for AS Roma football club. His interceptions, long range passing and accurate tackling make him one of the best defensive midfielders in early football playing days. He was also very calm and precise at the penalty kick. Danielle De Rossi even has a tattoo warning about tackling.

This shows how the Italian former midfielder loved tackling in his old playing days. His partnership with Francesco Totti in the team was a joy to watch in the past. In his professional football career, Rossi has played mostly as a central defensive midfielder and sometimes as a central midfielder. Danielle De Rossi is still famous for excellent tackling and defending.

The Italian legendry former midfielder joined Boca Juniors when his contract with AS Roma expired in 2019. De Rossi even scored a goal in his debut match with the Argentine football club. However the Italian suffered an injury while at the club and could only play limited time. He played only five matches in half-season with Boca due to the injury he suffered on his leg. Footballer Rossi said he was very happy to play for Boca Juniors while announcing his football retirement a few months later.

The FIFA World Cup winner former AS Roma player De Rossi has already retired from football since 2020. Thus he does not have any FIFA rating in the game. Previously, the Italian former midfielder had 82 rating in FIFA 20. He was given central defensive midfielder position in FIFA 20 version. There may be a chance that FIFA may release an Icon prime card with his name in the future. But we are not sure about it.