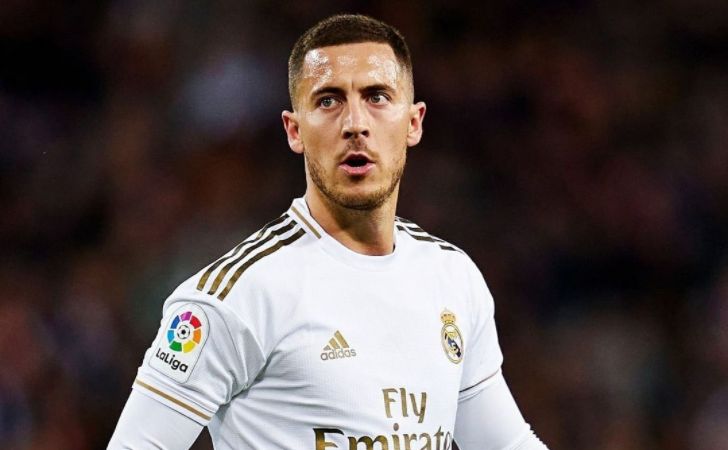 Well renowned for his dribbling and passing skills, Eden Hazard is one of the excellent left-wingers in modern Football. Belgian international professional footballer Eden Hazard plays for football club Real Madrid after his transfer from Chelsea in a whopping $120 million in 2019. He is a versatile player who can play excellently at the forward position, mainly as the wing.

Eden has played as a right midfielder, Left midfielder, and winger (usual position) for Real Madrid’s present club. Footballer Hazard is renowned for his pace, dribbling skills, and perfect shooting. He is also nicknamed “The Forbidden Fruit or The snake” by football fans. Belgian international Eden Hazard has played for his national team for a long time, earning his 116 Caps till date after his debut in 2008. Eden has won many major trophies in his career with different football clubs.

Belgian International Eden Hazard was born to an ex-footballer, father Thierry Hazard, and mother, Carine Hazard. Both his father and mother are from Belgium. His parents were both footballers, which motivated him to follow in their footsteps. Eden’s father played in the Belgian second division in his early career. Eden has three younger brothers who are also footballers by profession. According to his parents, he would often play in the ground and his backyard with his friends during his early childhood.

The talented child was soon recruited in the ranks of the local club Tubize, and in early 2007, he joined the French football club Lille before finally moving to the English football club Chelsea. Hazard played with number 10 on his jersey during his days at Chelsea, who now wears the number 7 at Real Madrid. Likewise, he uses Hazard as his name in his club and his national team kit. Starting as a playmaker in his early days, he has excelled at any positions in the attack and the midfield. He has three brothers: Thorgan Hazard, Kylian Hazard, and Ethan Hazard. All his three brothers are footballers by profession like him.

Eden Hazard, a Belgian international, was born on January 7, 1991, making him 30 years old. His faith is Christian, and his Zodiac (horoscope) sign is Capricorn. According to Thierry Hazard, he used to play football with the kids in their neighborhood. His father, who was ecstatic about his son’s skill, led him to small teams in Belgium, where he began his football career. Eden has continued to play at a high level since then, making him one of the finest players in contemporary football.

Hazard has a slim build and is 5 feet 9 inches tall. He has an average weight for a professional player, weighing roughly 163 pounds (74 kilograms) at rest. Similarly, Eden’s eyes are blue, and his hair is entirely black. He is a consummate professional who takes excellent care of his physique, training, and food. Footballer Eden has a chest measurement of 38 inches and a waist measurement of 30 inches. Likewise, his athletic biceps measure 14 inches. Likewise, he uses a shoe size of 9 (US).

Eden Hazard Salary and Net worth

Also known as “Eddie” by his teammates, Eden Hazard is worth around 100 million dollars to date. Footballer Eden has played for a variety of teams, including Lille, Chelsea, and Real Madrid. Therefore a large portion of his earnings is made up of Football Club pay and additional incentives, endorsement, and sponsorship deals. He has been a member of his country’s national team for 13 years, having made his debut in 2008. He has also earned a sizable wage while representing his country.

When he joined for Chelsea in 2019, he got a net salary of roughly $8 million. The Belgian international allegedly earns $15 million each season at his current club, Real Madrid. He is now one of the highest-paid defenders in contemporary football. Eden Hazard like fashion as well. Likewise, he also has a large collection of unique automobiles.

Who is Eden Hazard Wife?

Belgian international Eden Hazards follows Christian religion, and his Zodiac sign is Capricorn. Hazard is married to a woman he has known for a long time. Her name is Natacha Van Honacker.

They got separated when Hazard was changing clubs in his career. However, the couple reunited and have been married since Hazard has been into the French team Lille.

The couple is also parents to three sons, Yannis Hazard, Leo Hazard, and Samy Hazard. Hazard himself is a Fashion fan. He is also a funny guy in his team, as per his ex-teammates from Chelsea.

Eden Hazard is a talented and smart footballer who has amassed an impressive prize collection over the course of his career. His distinct flair and versatility distinguish him as one of the top wingers in the game. Football commentators and fans alike refer to him as a football wizard. He possesses exceptional dribbling, passing, and shooting abilities. Hazard, a Belgian international, has won various individual honors during his career while playing for both a French and an English club.

The English premier league winner has excelled at midfield and the attacking position. He has good passing, crossing, and shooting abilities, making him an all-around footballer. In his professional football career, he has played as a central attacker, central offensive midfielder, left-wing, and right flank. He is well-known in football for his ability to take free-kicks.

Eden Hazard is also quite active on social media platforms like Facebook, Instagram, and Twitter. He keeps the fans up to date on the matches and his announcements. He publishes images of his holidays, family, and teammates, and he has a massive fan base all around the world. Eden is one of the most amusing players, with an excellent sense of humor.

Eden Hazard has an overall rating of 85 in FIFA 22 games. His rating has decreased from that of FIFA 21. Being a midfielder, he has the highest passing and dribbling out of other attributes. He has the highest 88 for dribbling and the lowest 35 for defending. His individual FIFA 22 rating for different attributes are: