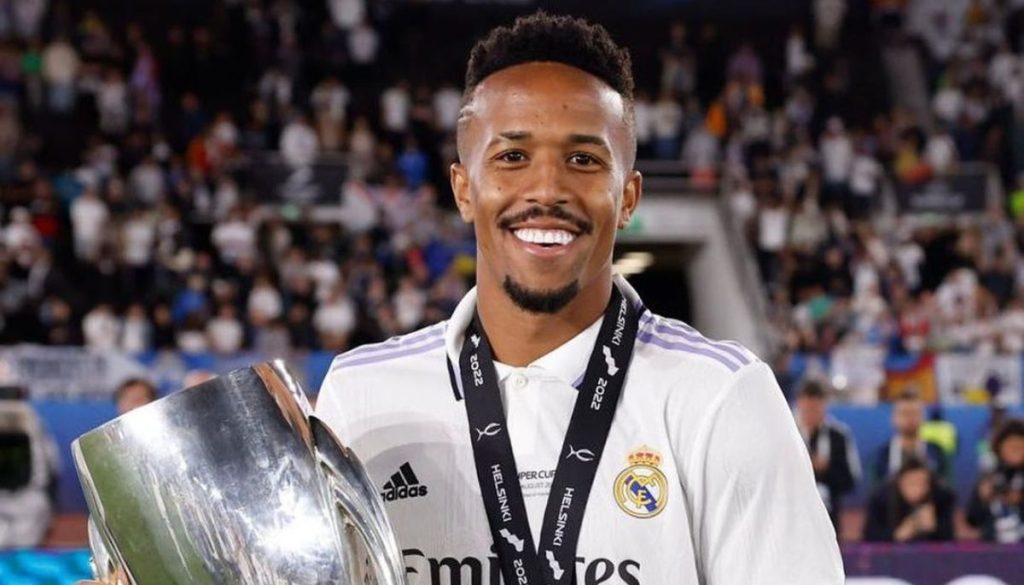 Eder Militao is one of the hottest prospects in the footballing world. He is a professional footballer from the South American nation Brazil.

The Brazilian superstar plays as a center-back for the Spanish giant Real Madrid as of 2022. He is a very versatile player and can play in positions like: Right back or Defensive midfielder.

Real Madrid’s defender Militao is regarded as one of the exceptional defenders in the world, recognized for his power, leadership, and aerial skill. The biography of a Samba superstar, Eder Gabriel Militao, covers some of the critical moments.

Eder Gabriel Militao was born in Sertaozinho, State of Sao Paulo, Brazil to Brazilian parents Valdo Militao and Ana Marie Militao. His parents raised him along with two siblings.

The rugged Brazilian defender was born the second of three children. The children were born through his parents’ marriage, who appear to be in their 50s.

Mili grew up alongside his brother Militao JR and little sister Maria Julia also known as Maju. Growing up, Eder was a timid kid and typically self-reliant, thoughtful, and empathic child.

Being born in Brazil, this samba star has been fond of football since an early age. His father, Valdo Militao played for Corinthians with legendary player Rivaldo early.

Because his father was a footballer, Mili had a perfect and happy childhood.

Who is Eder Militao Wife?

Eder Militao is not dating and is currently single. He has also never been married.

In the middle of 2022, Eder Militao split up with his girlfriend Caroline Lima. In early 2021, Lima met Militao. They began dating soon after.

Carolina’s romance progressed so quick. She was pregnant six months later. Unfortunately, Militao and Lima are no longer together.

The pair broke up just a few days before giving birth to their daughter. Lima posted a video on Instagram explaining the reason to break up with samba star Militao.

“After returning from his trip, I looked for him and tried to work things out,” Lima said.

“It got to a point where I saw that the love relationship wasn’t going to work. I decided to end it, which was the best decision at the time.

Today both of them have moved on with their life, but their love for beloved daughter Cecilia will always bind them together.

Carolina was born in Brazil and raised there. Lima is a well-known millionaire blogger. She owns her own photography company that specializes in wedding photography.

Carolina was previously known for her brief engagement with Neymar. Carolina Lima became well-known to football fans when she dated PSG and Brazilian national team star Neymar. Neymar and Carolina split up due to a disagreement.

Footballer Eder is 24 years old as of 2022 as he was born on January 181998. Eder Militao is a very handsome guy with a height of 6 feet 1 inch. He weighs 79 kg when balanced. He has a very athletic physique and works hard to maintain his fitness level. Mili follows stringent diet rules to say fit.

He even has his chef to keep him updated about his diet. Eder Militao has black eyes and black hair. He is also very fond of the accessories to wear like Ear pins, Watches, Bracelets, etc.

Militao belongs to a Christian family and is very religious about God. He is a devoted Christian and always prays to God before the match.

Militao’s body has been inked with many meaningful tattoos. He has a total of 23 tattoos on his body. His every tattoo is devoted to someone or has deep meaning in it. Some of the tattoos are:

Eder Militao came to Real Madrid in the summer of 2019 for the transfer fee of $50M on a six-year contract from the Portuguese side FC Porto. Before going to the top European powerhouse, he used to play for Sao Paulo.

Before playing for clubs like Real Madrid and Porto, he used to play for the Brazilian team Sao Paulo. His market value was $8 million.

Many top European teams were linked with the Brazilian superstar. But, in the end, Porto signed him for the bargain fees of $7 million. He signed a five-year contract with the Portuguese team in 2018.

After playing for one season with Porto, he was linked with top European teams, and his market value was inflicted to $50M. Real Madrid paid his release clause to make the marque galactico signing along with Eden Hazard, Ferland Mendy, and Rodrigo from Santos.

After his contract extension, he earns £ 180, 385 weekly. He is the 11th highest earner behind Ferland Mendy. His release clause is $500M, and his market value is estimated at $60M.

This Brazilian sensation is a right-footed center-back with an excellent ball-carrying ability. Eder is a very versatile player and can play in any defensive position. His attributes are: He is very good with the ball and can maintain the Highline positioning.

Similarly, he is also perfect in the air and has killer goal-scoring abilities. Militao is a very aggressive defender; he has nurtured himself while playing alongside Sergio Ramos and David Alaba. Militao has ever things to be the best defender in the world.

This footballer is very focused on his football career and less active on social media, and still has many followers. You can follow him on.

Brazilian international footballer Militao has an overall rating of 80 in FIFA 22 games. Madrid’s center-back is one of the toughest players in the game. His potential rating is expected to grow to 89 in FIFA 23. He has a Medium Attacking Work Rate and Medium Defensive Work Rate.

His overall ratings are:

Militao started his football career with the Sao Paulo youth academy. He started his first-team football in 2016, making his debut against Ituano during Copa Paulista.

The Sao Paulo star made 35 appearances before making his move to European side Porto.

On 7 August 2018, Militao joined the Portuguese side Porto for five years deal. He made his Primeira Liga debut on 2 September

On 14 March 2019, Eder signed for Real Madrid. He signed six-year contract effective 1 July 2019. Similarly, his transfer from from Proto was €50 million.

In 2021–22, Militao finally became a regular after the exits of veterans Sergio Ramos and RaphaëlVarane from the Madrid defense. He partnered with Austrian import David Alaba under the management of Carlo Ancelotti.

Eder made his international debut on 11 September in a friendly match with El Salvador. Since then, he has been the regular starter on the Brazilian national team.

Militao has always been the top-class center back. He has won many trophies in his footballing career.

Follow us and get the latest news delivered to your timeline!
Previous ArticleMan City vs Spurs: EPL Round 7 predictionNext ArticleShawn Michaels Net Worth, Wife, Age, Height, vs Undertaker, IG