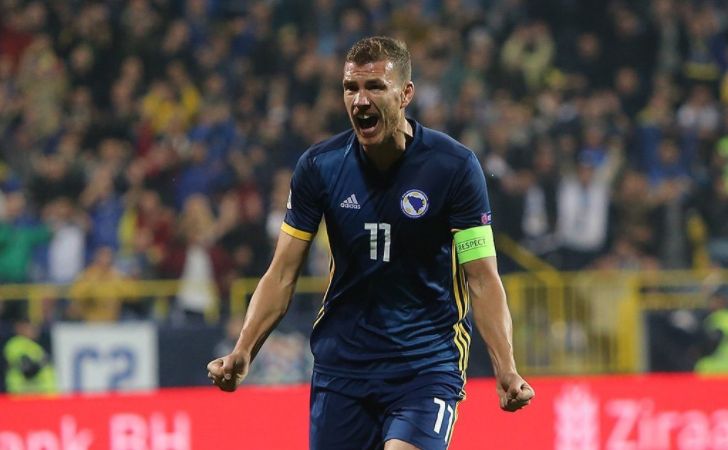 Edin Dzeko is one of the players who have struggled a lot in his childhood. He has become a successful football player after having grown up in a war-affected community. After his transfer from their rival Roma football club, football star Dzeko played for Inter Milan football club in 2021. In his career, the English premier league winner has played in many major tournaments with different clubs like VFL Wolfsburg, Manchester City, and Roma. Edin is a versatile player who can play excellently even as the central forward and mainly as the striker. Dzeko has played for his national team for a long time, earning his 118 Caps after his debut in 2007.

Footballer Edin has won many major trophies like the English premier league title and the German league title playing for different European clubs. Similarly, Edin is widely regarded as one of the finest attackers of the game due to his finishing, ball heading ability, and shooting skills during the game. This biography on Inter Milan football star, Eden Dzeko covers some of the important moments from his early life.

Who are Edin Dzeko Parents?

Edin Dzeko was born to their father, Midhat Dzeko and mother, Belma Dzeko. Dzeko’s parents were both from Bosnia and Herzegovina. Edin also has one sister whose name is Maryma Dzeko. Edin Dzeko has become a successful football player after having grown up in a war-affected community. His mother once saved his life by stopping him to go from playing and the bomb was blasted on that same spot later.

The talented child footballer was soon recruited in the local football club Zeljeznicar where he played seven seasons in the youth team. In 2003 he was promoted to the senior side, where he just played for two seasons. He was soon transferred to the Czech Republic football club Teplice but he was loaned to the other football club. Edin Dzeko uses Dzeko as his name in his club and his national team kit during his career. Starting as an attacking midfielder in Dzeko’s early days, he excelled at many attack positions.

German league title winner Edin Dzeko was born on 17-03-1986, making him 35 years old.He follows Islam as the religion, and his Zodiac (horoscope) sign is Pisces.

Footballer Dzeko has an athletic body and he stands 6.4 feet tall. Edin has evenly matched weight for a professional footballer, as he weighs around 176 pounds (80 kilograms) at normal. He has v color eyes and black color hair. Dzeko is very professional and takes very care of his body, training, and diet. Dzeko uses a shoe size of 10 (US). We currently do not have any information about his body measurement. We will update the information very soon.

Edin Dzeko Salary and Net Worth

Also known as “The Bosnian Diamond” by his fans, Edin Dzeko is believed to be worth around 21 million dollars to date. He has played for many rich European football clubs like VFL Wolfsburg, Manchester City, and Inter Milan. A major part of his earnings constitutes Football club salary and additional bonuses, Endorsement, and sponsorship deals. He made 118 appearances for his national team after his debut in 2007. Edin has also earned a significant salary playing for his national team.

Who is Edin Dzeko Wife?

Edin is married to his girlfriend, whom he had known for a long time. Her name is Amra Silajdzic. She was married to another man before the couple decided to split up. She also had a daughter with her ex-husband, whose name is unavailable. They fell in love with each other during his Manchester City days. The couple are proud parents to two children.

They have a son whose name is Dani Dzeko and a daughter whose name is Una Dzeko. Edin has a huge following on his social media accounts like Instagram, Facebook, and Twitter. Footballer Dzeko takes very care of his body, training, and diet, making him one of the remarkable professionals in this sport.

Footballer Edin Dzeko is a Muslim by religion.

Edin Dzeko is an intelligent and versatile footballer with beautiful trophy collections throughout his career. His ball heading ability, passing and dribbling qualities make him one of the best midfielders in football.

Dzeko is also very good at crossing and passing the ball, making chances for his teammates to head the ball into the net. in addition, he has won several major trophies like the German league title and English premier league title while playing many big football clubs. Similarly, Edin has played mostly as a striker and a centre forward in his professional football career until now.

Edin Dzeko is also quite active on social media like Instagram and Twitter. Dzeko keeps updating the fans about the matches and, his announcements. Edin posts pictures of his vacations in different places, family, and his teammates earned him huge fan followings worldwide. Footballer Dzeko uploads pictures with his cars, watches and children on social media.