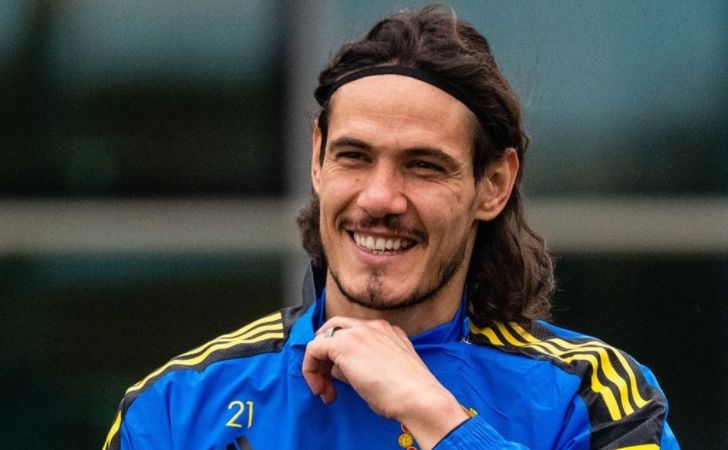 Uruguayan international footballer Edison Cavani is a prolific and lethal goal scorer in football who plays in the striker position. Football star Cavani plays for English football club Manchester United, after his transfer from PSG football club in back in 2020. In his career, the Copa America trophy winner has also played in many club tournaments with clubs like Napoli, PSG, and Manchester United. He was the striker along with his partner Zlatan Ibrahimović while both were playing for PSG in the past. Uruguayan international Cavani can play at any position in the attack, but he prefers to play as the striker or central forward.

He has played for his national football team Uruguay for a long time, earning his 127 Caps till date after making his debut in 2008. Edison has won many major trophies like the French league title and the Uruguayan Primera league title playing for different football clubs. Edison Cavani is widely regarded as one of the best strikers of this generation due to his long shooting skills, precise finishing, and ability to head the ball into the net. This biography on Manchester United football star Edison Cavani covers some of the important moments from his early life.

Uruguayan generational football Edison Cavani was born to Luis Cavani and mother, Berta Gomez. Both his father and mother are natives of his home country Uruguay. His father was also a professional footballer in his playing days in the past. Cavani was born in the town of Uruguay, known as Salto. Cavani is the youngest son of his parents, and he has two siblings. He has two whose names are Walter Guglielmone and Christian Cavani. Both his brothers are also professional footballers like their brother Edison.

Cavani fell in love with football from a very young age as his father himself was a former footballer. Amazed with his skills and talent, Cavani was asked to join the local football club Danubio, where he spent five years in the club’s youth team. By impressing then club coach, Cavani earned a promotion to the senior team of Danubio football club in 2005. He uses Cavani as his name in his club and his national team kit during his career. Starting as an attacker in his early days, he has excelled at many positions in the forward line of the game.

French league title winner Cavani was born on 14-02-1987. This makes him 34 years old now. He follows Christianity as the religion. Similarly, his Zodiac (horoscope) sign is Aquarius. His fans are also nicknamed “El Matador” by his fans, which means the Bull in the Italian language. He earned that nickname while playing for Italian football club Palermo and impressed the fans. Uruguayan international footballer Edison Cavani has distinct long hair.

Cavani has an athletic body and he stands 6.0 feet tall. He has evenly matched weight for a professional footballer, as he weighs around 165 pounds (75 kilograms) at normal. This footballer has dark brown colour eyes and black color hair. Edison is very professional and takes very care of his body, training, and diet even at 34. He has a chest span of 41 inches and a waist of 32 inches. Likewise, Cavani’s athletic biceps measure 14 inches and he uses a shoe size of 12 (US).

Edison Cavani Salary and Net Worth

The Copa America trophy winner Uruguayan international footballer is worth around 40 million dollars to date. He has played for many richest European football clubs like Napoli, PSG, and Manchester United, so a major part of his earnings constitutes Football Club salary . Also his income are from additional bonuses, endorsement, and sponsorship deals. Cavani has also earned a significant salary playing for his national football team. The French league title winner was signed to play for Palermo football club in 2007, where he also earned the nickname “El Matador”.

Likewise, he was again signed by Napoli football club in initial loan deal; however, the deal was made permanent later for around 14 million. He also played seven seasons with one of the richest clubs in the world, PSG. At his present club Manchester United, he earns around 15 million dollars per season. Edison Cavani is one of the highest-paid players in the English premier league with his teammates Cristiano Ronaldo and Paul Pogba.

Who is Edison Cavani Wife?

Edison Cavani is widely regarded as one of the most professional players in this port. He was married in the past but the couple has divorced and lived separately. Edison was previously married to a woman whose name is Maria Soledad Cabris. This couple fell in love with each other while still playing in Italy with the Napoli football club. They are parents to two sons, Bautista Cavani and Lucas Cavani.

As per multiple rumors, Cavani is currently in a relationship with a model whose name is Jocelyn Burgardt. The lovely couple also has a daughter together whose name is India Cavani. Their daughter was born in 2019 while Cavani was still playing in the French capital. Being a professional footballer, Cavani takes very care of his body, training, and diet, making him one of the remarkable professionals in this sport.

Edison Cavani is a respected and professional footballer with beautiful trophy collections throughout his career. Cavani’s precise finishing has helped him score many goals in club and international tournaments. His ball heading ability, passing, and dribbling qualities make him one of the best midfielders in football.

Cavani is a specialist in the long-distance shooting. Cavani has an athletic body and taller height and is also very excellent at heading the ball into the net. Footballer Edison has won several major trophies like the French league title and French Super Cup in his playing for Paris Saint-German (PSG). He has played mostly as a striker and a centre forward in his professional football career until now.

Edison Cavani is also quite active on social media like Instagram and Twitter. Footballer Cavani keeps updating the fans about the matches and his announcements. This footballer posts pictures of his vacations in different places, family, and his teammates, earning him huge fan followings worldwide. Similarly, He uploads pictures with his cars, watches, and children on social media.

The Copa America trophy winner Uruguayan international footballer has an overall rating of 85 in FIFA 22 game. Cavani is given his favorite striker midfielder position in FIFA 22. Being a forward, he has the highest shooting and physical out of other attributes. He has the highest 86 rating for shooting and the lowest 51 for defense. Cavani individual FIFA 22 ratings for different attributes are: