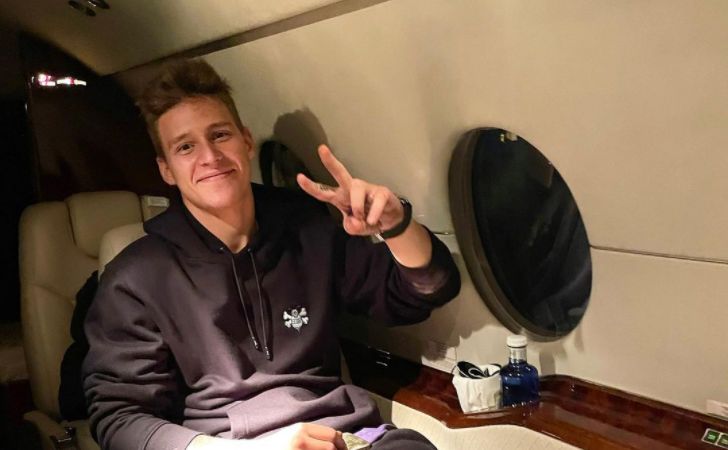 Fabio Quartararo is a French professional road racer who is currently competing in Grand Prix motorcycle racing.  He rides his bike aggressively and smoothly, which takes his riding to near perfection. And now, with the Yamaha Factory Racing team, he has a great bike, mechanics, and crew which make him the top contender in MotoGP World Championship.

On 29 January 2020, Yamaha Factory Racing announced that Quartararo would replace Valentino Rossi at the beginning of the 2021 season. He won the 2021 MotoGP World Championship with five pole positions, five fastest laps, ten podiums, and five wins.

Racer Fabio Quartararo was born on 20 April 1999 in Nice, which is the capital of the Alpes-Maritimes department on the French Riviera, sits on the pebbly shores of the Baie des Anges. His father, Etienne Quartararo, was a former French Champion in the 125cc class and his mother Martine works as a hairdresser.

The information about his siblings is on the internet. Some reports suggested he has a younger brother. Fabio Quartararo joined the Yamaha Factory Racing MotoGP Team at the beginning of the 2021 season.

There is not much public information about his education on the internet at the moment. However, the information will be updated as soon as possible.

MotoGP racer Fabio Quartararo was born on 20 April 1999 in Nice, France. Quartararo is 22 years old at the moment. His sun sign is Taurus. Fabio has a height of 5 feet 10 inches (178 cm) and weighs around 68 kg. He follows Christianity.

His eyes and hair are light Brown. His shoe size and his body measurements are under review at the moment and will be updated as soon as possible.

There is not much public information about his personal life on the internet. However, some reports suggested that he was at least in on relationship in the past.

We will update the details about his personal life as soon as possible.

Fabio Quartararo uses Scorpio EXO-R1 AIR helmet in 2021. His helmet has some cool artwork. On the back of his helmet is number 20, designed in white color. The majority color in his helmet is red.

Fabio Quartararo currently uses the Yamaha YZR-M1, which is an inline-four motorcycle specifically developed by Yamaha Motor Company to race in the current MotoGP series.

Fabio Quartararo joined Yamaha Factory Racing MotoGP Team in MotoGP at the beginning of the 2021 season.

During the beginning of his career in 2013 at the FIM CEV Moto3 Junior World Championship, he joined the Wild Wolf Racing team, riding a Honda. Next season in 2014, he joined Estrella Galicia’s 0,0 junior team still riding the Honda.

In October 2014, he moved up to Moto3 World Championship. He was with the same Estrella Galicia 0,0 team, again riding the Honda. Next season in 2016, he joined the Leopard Racing team riding KTM.

In 2017, he moved to Moto2, joining the Pons Racing team. Next season, he joined the Speed Up, Racing team.

In 2019, he moved to MotoGP World Championship, joining the Petronas Yamaha SRT. After staying two seasons with the team, he joined Monster Energy Yamaha MotoGP in 2021.

Fabio Quartararo Salary and Net Worth

Fabio Quartararo is currently with the Moster Energy Yamaha team.

Fabio Quartararo’s net worth is $5 million as of 2021. His overall salary and net worth are from racing, sponsorships, and endorsements.