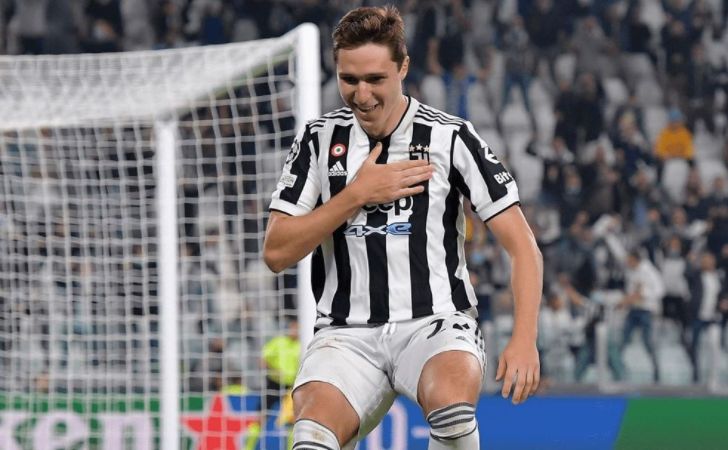 Italian winger and central forward Federico Chiesa is one of the world’s prolific finisher and skilled football players. Footballer Chiesa currently plays for the Italian football club Juventus after agreeing on a loan deal from the rival football club Fiorentina. Chiesa has become a hot prospect for many European football clubs after his exciting performance at the European Championship (2020). Talking about his overall playing position, he can play excellently as a right-winger but mainly as the striker/central forward.

Italian star central forward Federico Chiesa was born to their father Enrico Chiesa and mother, Francesca Lombardi. Chiesa was born to a rich family in Genoa, Italy. His father, Enrico, is a former professional footballer who played for different Italian football clubs. He got motivated to become a professional footballer by following his beloved father’s footsteps. His parents also have two other children apart from Federico. Federico Chiesa’s brother’s name is Lorenzo Chiesa, while his sister is Adriana Chiesa.

He spent his early childhood days playing football with his father and brother. The Italian joined the local football club Settignanes in his home country as a kid. Chiesa spent around five years in the academy of the Italian football club. Chiesa was offered the chance to join the youth academy ACF Fiorentina where his father played in his old days. He played with the young players in the team for around 9 years. The Italian central forward uses Chiesa as his name in his club and national team jersey.

The Italian Super Cup winner central forward Federico Chiesa was born on 25th October 1997, making him 24 years old. (As per February 2022) He follows the Christian religion and his zodiac sign is Scorpio. Even with his weaker foot, Chiesa is a right-footed winger with excellent dribbling skills. He has a medium-sized body and stands 5.9 feet tall at present.

Italian Winger Chiesa does not have any tattoos on his body. Footballer Chiesa has evenly matched weight for a professional footballer, as he weighs around 169 pounds (77 kg). Chiesa has dark brown color eyes and dark brown colour hair. The Italian forward has kept his hair short until now. Chiesa uses a shoe size of 11 (US). He is very careful about his training and diet to keep himself fit for every match. Currently, we do not have any information about his body measurement. We will try to update the information soon.

According to multiple sources, Federico Chiesa is worth around 10 million dollars to date. He has played for Fiorentina and currently plays for Juventus football club. Therefore a major part of his current net worth constitutes salary, bonuses, and sponsorship earnings he earned playing for those clubs.

He has played on 37 occasions for the Italian national football team after making his international debut back in 2018. So, Chiesa has earned a significant salary playing for his national football team. Chiesa earns around 5 million dollars per season at his present club Juventus. His earnings and current net worth make him one of the richest Italian young football players.

Federico Chiesa was injured when he was paying a league match with AS Roma. He missed many matches due to the injury. The young Italian center forward got an injury on his ACL. Federico Chiesa is expected to return fully fit by August 2022.

Who is Federico Chiesa Girlfriend?

Young Italian forward Federico Chiesa is a true believer of Lord Jesus. He is still unmarried, but he has been in a relationship with a woman he had known for a long time. His girlfriend’s name is Benedetta Quagli and she is also from Italy. She is a model and a social media influencer by profession. Benedetta loves and has kept a few dogs as her pet.

She sometimes uploads pictures with her dogs on her Social media accounts like Facebook and Instagram. They started dating in early 2019 and the lovely couple has been inseparable ever since. The couple, however, does not have any children together. Being a professional athlete, he spends his significant time in the gym and team training.

Federico Chiesa is one of the promising young football players in European football. The Italian Super Cup winner Italian center forward is very skilled with both feet. Naturally, he is a right-footed player. His lightning speed and fast dribbling make it hard for his opponents to stop him. His long shots, flashy acceleration and pacey dribbling, make him one of the excellent forwards in football.

Federico Chiesa is also very good at crossing the ball inside the box, making chances for his teammates to head the ball into the net. The Italian winger is also a reliable goalscorer in counter-attack situations. He has played mostly as a left/right-winger but he is also comfortable playing as a central forward at the time of need. Former Fiorentina attacker Federico Chiesa is famous as an excellent finisher in football.

Italian center forward Federico Chiesa is one of the most valuable young players in football. His superb performance for his football team has increased his market value in recent times. According to Transfermarkt, his current market value is 70 million Euro. Federico Chiesa was signed in a loan deal by the Juventus football club with an offer of making it permanent for around 50 million dollars.