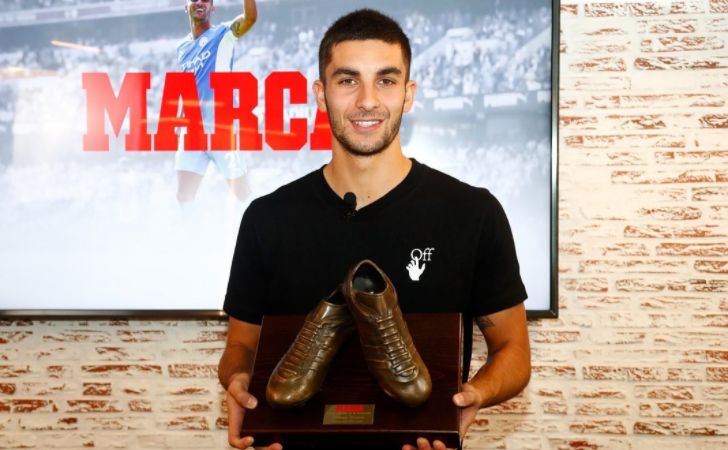 Spanish winger and right midfielder Ferran Torres is one of the technically gifted and agile players in football. He is quite famous as one of the promising young footballers of this generation. He plays for Spanish football club FC Barcelona after his transfer from Manchester City football club in August 2020. In his football career, the English premier league winner has played in many major tournaments with different clubs like Valencia and Manchester City.

Talking about his overall playing position, he can play excellently as right and left midfielder but mainly as the right-winger. Torres has played for his national football team England for a long time after making his international football debut in 2020. Footballer Ferran has won many major trophies like the English premier league title and the Copa Del Rey title playing for different European clubs. Footballer Torres is widely regarded as one of the finest attackers in this sport due to his agility, visionary passing skills, and versatility during the game. This biography on Fc Barcelona’s recent signing Ferran Torres covers some of the important moments from his early life.

Spanish international footballer Ferran Torres was born to their father, whose name is unavailable, and mother, whose name is Dolores Garcia Alcover. Both his parents are originally from Spain. Torres was born in a middle-class family in Spain called Foios. He also has one sister and a brother as siblings. His sister’s name is Arantxa Torres, while his brother’s name is unavailable. We will update the information soon. The talented Spanish footballer was very close to his brother and sister, whom he also considers his best friends.

In an interview, Ferran Torres’s mother once said that he used to break flower vases and windowpanes with the ball as he loved playing the game from his childhood days. He was very skilled and technically gifted with the ball on his feet. His talent saw him get into the football academy of Valencia football club. Torres Spent more than 10 years with the youth team of Valencia CF developing his overall football skills. Footballer Ferran played most of the matches in his youth career, which saw him get into the first team of the Spanish football club. He uses Ferran as his name in his club and his national team kit.

The English premier league title-winner Spanish winger was born on 29-02-2000, making him 21 years old. Torres is one of the three children born to his parents. He follows Christianity as the religion and his Zodiac (horoscope) sign is Pisces. Torres is one of the agile and technically gifted football players of this generation. He is a right-footed player even though he has good passing and shooting skills with his left foot.

Torres has an athletic body, and he stands 6 feet tall. He has evenly matched weight for a professional footballer, as he weighs around 169 pounds (77 kilograms) at normal. He has brown colour eyes and brown color hair. We do not have any information about his body measurement at the moment. We will update the information soon. The Under-19 European championship winner is very professional and takes very care of his body, training, and diet even at a very young age. His athletic biceps measure 13 inches and he uses a shoe size of 10 (US).

Ferran Torres Salary and Net Worth

According to multiple online financial sources, Ferran Torres is believed to be worth around 2.5 million dollars to date. He has played with many richest football clubs like Valencia, Manchester City, and FC Barcelona. Therefore a major part of his earnings from the football club, constitutes football club salary, Performance bonuses, endorsement, and sponsorship deals.

He has made 22 appearances for his national team after marking his international football debut in 2020. Thus, he has also earned a significant salary playing for his national team. Manchester City signed Torres when he had just one year contract left with Valencia. At Manchester City, he was earning around dollars per season. He earns around 3.5 million dollars per season at his present club FC Barcelona. This salary and net worth makes him one of the highest-paid young footballers.

Who is Ferran Torres’s girlfriend?

Torres is still unmarried, but he has been in a relationship with his girlfriend, whom he had known for a long time. Her name is Sara Martinez and she is 21 years old. (As of 2022) Sara is also a Spanish international and a horse showjumper by profession.

This lovely couple fell in love soon after they met. Sara is also the daughter of former FC Barcelona player and manager Luis Enrique. So that might be the reason why the Spanish winger opted to move to FC Barcelona. Torres and his girlfriend have a huge following on their social media accounts like Instagram, Facebook, and Twitter. He takes very care of his body, training, and diet at a very young age to keep himself fit for every match.

Torres is one of the intelligent and agile young footballers of this generation. He has good dribbling, passing, and shooting ability, making him one of the best. The Under-19 European Championship winner has good crossing and passing attributes, making his teammates to head the ball into the net.

Despite being a winger, he has excellent shooting and finishing. So he also played as the striker in the absence of Argentine striker Sergio Aguero during his days at Manchester City. Ferran has won several major trophies like the English league title and Copa Del Rey in his career playing many big football clubs. In his professional football career, he has played mostly as the left/right midfielder and winger. But the Spanish footballer is also capable of playing as the central forward.

Ferran Torres is also quite active on social media like Instagram and Twitter. Torres keeps updating the fans about the matches and, his announcements. Ferran posts pictures of his vacations in different places, family, and his teammates earned him huge fan followings worldwide. Footballer Torres uploads pictures with his cars, watches and siblings on social media.