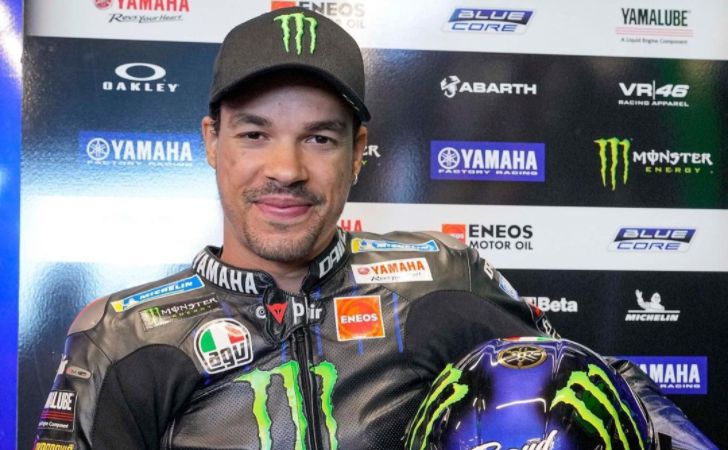 Franco Morbidelli is an Italian professional road racer currently completing Grand Prix motorcycle racing.  He became the first student of Valentino Rossi when he joined VR46 Riders Academy in 2013. So, Franco has learned from one of the greatest road racers of all time. He has a smooth-riding style, making him one of the favorites in any race.

He won the 2013 European Superstock 600 Championship and the 2017 Moto2 World Championship.

In December 2021, Yamaha Motor Co., Ltd. confirmed that MotoGP racer Franco Morbidelli is a Yamaha Factory Racing MotoGP Team rider for the remainder of the 2021 season and the 2022 and 2023 campaigns.

MotoGP racer Franco Morbidelli was born on 4 December 1994 in Rome, which is the capital of Italy. His Italian father, Livio Morbidelli, and his Brazilian mother, Cristina de Franco‘s work lives are unknown and will be updated in Playersaga as soon as possible.

There is no information about his siblings on the internet. Maybe he has no siblings at all.

Franco Morbidelli joined the Yamaha Factory Racing MotoGP Team at the end of the 2021 season, staying till the 2023 season.

There is not much public information about his education on the internet at the moment. However, the information will be updated as soon as possible.

Racer Morbidelli was born on 4 December 1994 in Rome, Italy. He is 27 years old at the moment. His sun sign is Sagittarius. Franco has a height of 5 feet 9 inches (176 cm) and weighs around 64 kg. His religion is under review at the moment.

Franco’s eyes and hair are Dark Brown. Similarly, His shoe size is 10 (US), and his body measurements are under review at the moment and will be updated as soon as possible.

There is not much information about his personal life on the internet. However, some reports suggested that he was at least in on relationship in the past.

More details about his personal life will be updated as soon as possible.

Franco Morbidelli uses AGV PISTA GP RR helmet in 2021. On the back of the helmet is catchy parrot artwork with a Brazilian flag on the parrot’s chest. His helmet has other cool artworks, too, consisting of colorful flowers. His helmet doesn’t have his bike number.

Franco Morbidelli currently uses the Yamaha YZR-M1, which is an inline-four motorcycle specifically developed by Yamaha Motor Company to race in the current MotoGP series.

Franco Morbidelli joined Yamaha Factory Racing MotoGP Team in MotoGP at the latter half of the 2021 season.

During the beginning of his career in 2011 in European Superstock 600, he was with Bike Service Racing Team and RCGM Team. Later in 2013, he switched to San Carlo Team Italia, riding their Kawasaki Ninja ZX-6R.

Sometime in 2013, he moved up to Moto2. During his Moto2 Career, Federal Oil Gresini Moto2, Italtrans Racing Team, and Marc VDS team.

He moved up to MotoGP in the 2018 season with the Petronas Yamaha team. He spent three and half seasons with the team, and the remaining half-season, he went with Monster Energy Yamaha MotoGP.

Franco Morbidelli Salary and Net Worth

Franco Morbidelli is currently with the Moster Energy Yamaha team.

Franco Morbidelli‘s net worth is $1-$5 million as of 2021. His overall salary and net worth are racing, sponsorships, and endorsements.