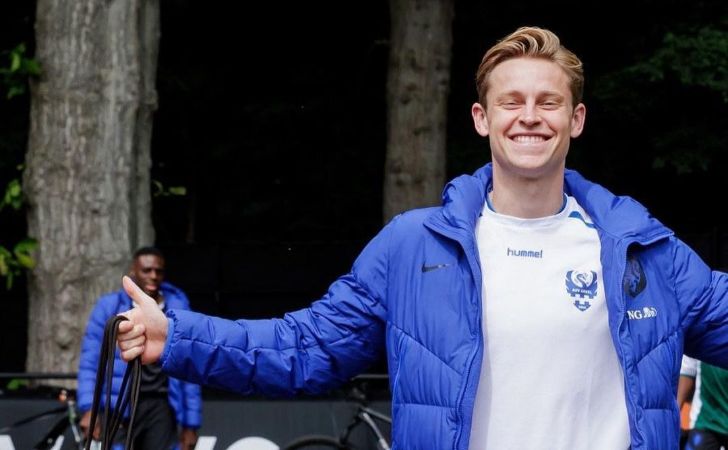 Dutch professional footballer Frenkie de Jong plays for both Netherlands national team and Spanish club Barcelona as a midfielder. Currently, he is one of the best midfielders who excels in passing, dribbling, vision, and offensive skill. In 2015, De Jong started his professional career at Willem. In 2018 September De Jong made his senior debut for the Dutch national team.

A year later, this dutch midfielder moved to Ajax. The sell-on clause reduced the symbolic fee. After winning a domestic double and making it to the Champions League semifinals. De jong made a name for himself at Ajax as one of the top young midfielders in Europe. Similarly, this midfielder was named Eredivisie Player of the year and the KNVB Cup winner.

Frenkie de Jong was born on May 12, 1997. It was the same day the Brazillian football player Marcelo was born. John de Jong and Marjon Schuchhard -De Brujin are the father and mother of Frenkie de Jong.

Young Frankie was born to a football-playing mother, whereas his father was also an ASV Arkel player. Likewise, de Jong’s grandfather was also an amateur football player. Youri de Jong, younger brother of Frenkie also plays for the A1 of the ASV.

With Regards to his sports-loving parents, who respected his love for the game. This dutch midfielder grew up playing football for his hometown team ASV Arkel.

Even at a very young age, Frankie’s talent was exceptional in football. This athlete was only seven years old when his father deemed him for legitimate competitive football. Frenkie was given trials in 2004 at mid-table Willem II and Dutch powerhouse Feyenoord. Current Barcelona midfielder had the freedom to choose after succeeding in both trials.

Despite being a very younger player Frenkie choosed Willem II over Feyenoord.

De Jong built his current style of play at Willem II’s youth programs. The passionate child impressed his coaches at various levels. Especially Jos Bogers then under-15 coach of Willem II who never tries to cease what comes through Frenkie naturally.

Frenkie grew up playing football for the ASV Arkel team m of his hometown. Much to the delight of his sports-loving parents who respect his love of the game. Frenkie said” I liked playing football in the village with my pals whenever I didn’t have to go to school; when I wasn’t required to attend school, I discovered it to be a sport I enjoyed participating in”

According to Frankie’s father, a well-known academy was interested in taking him away from his local club. Because even at a young age he was a good football player. We can conclude that he has spent his schooling in a football academy.

Moreover, Playersaga will update the information regarding his educational background as soon as it becomes available.

One of the current greatest midfielders was born on 12 May 1997. Currently, this made him 25 years of age. Frenkie de Jong is 5 feet 11 inches tall which means 1.8 m. Despite being a lean player his body weight is 74 kg which is 163 lbs.

This midfielder holds the Netherlands nationality and has represented the Dutch national team in different age-level competitions. De Jong has spent his childhood with his family in Holland. He has a strong religious belief in Christianity.

De Jong is one of the most humble and calm players in the Barcelona squad midfielder. His personality is way more different than his teammates. Frenkie is a stubborn, hardworking, dedicated, and intelligent athlete. This is the kind of personality Taurus zodiac sign person posses. Indeed, his Zodiac sign is Taurus.

His hometown residence is Arkel, Netherlands, where he grew up with his brother Youri de Jong. Whenever de Jong gets time, try to make it worth it. So he likes to try new dishes most of the time. In the meantime, he is a non-vegetarian.

O the contrary, when it comes to his sexual orientation, he is straight. After all, Jong is in a relationship with his childhood sweetheart Mikky. Moreover, this athlete has a beautiful pair of blue eyes and blonde hair.

.Without a doubt, this athlete is very conscious of his physique. To be in perfect shape, he prefers eating healthy food. Accordingly, his biceps and waist measurements are 12″ and 32″ respectively. Followed by his chest measurement which is 40″.

In addition, his dress size and shoe sizes are 8 US and 11 US respectively.

Frenkie de Jong is a versatile player. This player can play as a center-back, defensive midfielder, holding midfielder, central midfielder, and box-to-box midfielder. Barcelona’s midfielder has been hailed for his blend of defensive steadiness and playmaking abilities. In Ajax, de Jong frequently played center defense alongside Matthijs de Light.

This 25-year-old athlete is a current midfielder of the Barcelona and the Netherlands national team. Subsequently, he wears jersey number 21 for the club and the country. Frenkie is a right-footed player whose work rate is high/medium. Therefore, his potential rating on FIFA 2022 is 92 whereas his overall rating is 87.

Based on our database these midfielder rating are listed below:

Who is Frenkie de Jong Girlfriend ?

Frenkie leads a non-materialistic lifestyle. He doesn’t like to possess expensive clothes and other possessions. Meanwhile, every successful man has a hand of women like Mikky Kiemeney.

At present, Mikky Kiemeney is a successful entrepreneur and aims at developing her brand. She owns a company called MIKKYKI. Mostly it is a clothing and accessories brand, which sells t-shirts, hoodies, phone cases, and more. Apart from being an entrepreneur, Kiemeney is also an Instagram influencer.

This dutch midfielder has been dating Mikky Kiemeney for many years. When Frenkie de Jong was playing for Willem II he first met a beautiful, charming, and very supportive lady, Mikky Kiemeney. She is a hockey player and a sports enthusiast. According to reports, the couple shared a home in Amsterdam and have been dating since 2014.

The couple hasn’t been married yet but is in a relationship. Despite being in a relationship for so long, they have not given birth to any children. However, Playersaga will update the information as soon as it becomes available.

Frenkie de Jong is now a rising star. He has been receiving massive income from his professional career. Since he makes an estimated 16 million annually, his net worth will increase rapidly over time. In recent days, his market value has been increasing dramatically. This athlete has demonstrated why Barcelona paid his 85 million euros from every angle.

After crunching the numbers de Jong is earning 43,716 pounds per day. In the contrast, an average man needs to work for at least 39.9 years to make the amount of money he does in one month.

This athlete also earns from endorsements which are between $1-$5 million. Frenkie possesses a BMW car as he made good wages.

Frenkie de Jong is one of the most versatile players. He gains popularity when this athlete started playing for Ajax. Subsequently, this athlete has millions of followers from all over the world.

He has been a great influencer. Besides horse riding and watching movies Frenkie also likes to surf the internet. After going through his different social media posts, this athlete likes to post pictures of his achievements and success.

After participating in Willem II’s youth academy, Frenkie made his Eredivisie debut on May 10, 2015. It was against ADO Den Haag where his team defeated in 1-0 score at home. Meanwhile, several clubs notably Ajax, PSV tried to sign him after his impressive debut. On the other hand, this jersey number 21 played chosen Ajax. Likewise, he committed to the team in the summer of 2015. The dutch player spent time at Ajax with the club’s reserve team.

Frenkie made significant contributions in 2016, leading to his promotion to the senior team. When Ajax reached in final of the Europa League in 2017, his contributions were phenomenal. Manager Erik ten Hag saw something exceptional in de Jong and gave him a chance to showcase his talent. Back then, top clubs like Manchester United, Manchester City, Spurs, Real Madrid, PSG, and Barcelona got interested in dutch talent. These clubs also made a bid for him.

As a center midfielder in January 2015-2016, Frenkie made 15 appearances after joining the club Ajax. In that game, he scored two goals and provided three assists. After his outstanding performance throughout the season, Frenkie received the talent of the season title in 2016-2017 Erevidise. It was against Sparta Rotterdam his senior debut came for Ajax. At 20, this athlete had made 26 appearances for the senior team. He favored playing as a center-back in a back four alongside Matthijs de Ligt of the national team. However, throughout the season Frenkie assisted 8 goals in 22 league games receiving two yellow cards.

De Jong was signed by La Liga team Barcelona on January 23, 2019, to a five-year deal that will begin on July 1. The initial fee was €75 million. Before choosing Barcelona, De Jong negotiated with Paris Saint-Germain, Manchester City, and Manchester United. On August 16, 2019, Athletic Bilbao defeated him 0–1 in his professional debut.

On January 23, 2019, Frenkie de Jong was signed by the La Liga team Barcelona in a five-year deal. It is reported that the initial fee was 75 million euros. Before joining Barcelona, this dutch midfielder held negotiations with PSG, Manchester City, and Manchester United.

This 25-year-old athlete debuted for Barcelona on 16th August against Athletic Bilbao. On July 10, 2015, he made his national team debut for Netherlands under-19 squad against Germany. However, his senior international debut was against Peru in a friendly match. Since then Frenkie has played every game for the dutch. On 6th September 2019, he scored his first goal for the Netherlands. It was over Germany in UEFA Euro 2020 qualifying competitions.

To this date, Frenkie de Jong has played more than 320 games in his entire footballing career. He has scored more than 25 goals for his club and country.