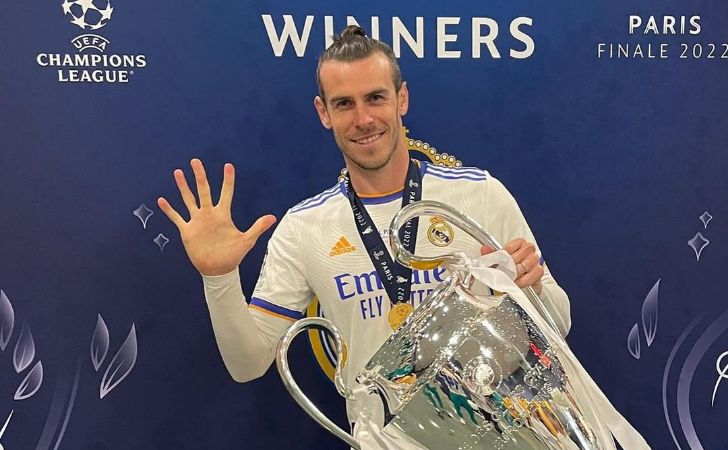 Gareth Frank Bale is a Welsh professional footballer commonly known as Gareth Bale. Primarily, he plays as a winger for the club and the country. Currently, this left-footed player is 32 years of age.

Real Madrid secures their 35th League title in the 2021-2022 season. Similarly, on 29th May 2022 Madrid crown the title of Champions League for the 14th time in football history.

All thanks to Vinicius Junior 59th minute goal converting Valverde’s cross. Before this title, Cristiano Ronaldo was the only player to win the 5 Champions  League. After  Madrid got victory over Liverpool, all most every Madrid player who was serving the club for the long run has achieved this feat.

Gareth Bale is one of the fan’s favorite players to crown the title 5 times. This Walesman has said farewell to the Real Madrid where he plays since 2013. His time at Real Madrid was filled with support and criticism at the same time.

Table of Contents hide
1 Why did Bale Leave the Club?
2 Which club will Bale join?

This 1.85 m tall athlete joined Real Madrid in 2013 from English club Tottenham. He was the most expensive player whose contract is ending at the end of this month.

Gareth Bale has won 16 honors during his time in Real Madrid. Including, the remarkable journey of becoming one among few players to win 5 Champions League trophies.

Bale’s overhead kick goal against Liverpool in 2018 will always be remembered. Must be remembered, that Bale has scored in three Champions League finals, only Ronaldo has netted more than Bale in the UCL final.

Bale has only managed to appear in seven games for the club this season after returning from a loan spell at Tottenham. This 32-year-old was an unused substitute for Ancelotti’s side.

Why did Bale Leave the Club?

One of the main reasons for Wales’s man is he had to go through long-run injuries. This 32-year-old athlete only made four starts for Madrid, three were made in August. Even, Bale has to spend the 2020-21 season on Loan to his previous club Spurs.

Bale has to go through the ankle, calf, and multiple knee injuries. That’s why he was already missing out on the squad. This season Bale was forced to release from the Supercopa de Espana campaign.

The Wales International man wasn’t seen celebrating when Real Madrid won their 35 La- Liga trophy. Accordingly to his Twitter post, he was disappointed for not being able to celebrate due to a back bad spasms but was really proud of the team for winning the title.

During the remarkable 14th UCL triumph, once most expensive signed player only feature for seven minutes in the final. During his nine years spell at Real Madrid, he has won three La-Liga titles. Likewise, his role was exceptional when he help the club to win four Champions League.

Without considering his role, Bale has faced huge criticism in Spain. In the meantime, he also got the nickname ‘Golfer’ by the fans.

Which club will Bale join?

The transfer market of 2022 is going to be very unpredicted and interesting. Both at the same time. For now, it’s been everyone’s concern and the question “Where Gareth Bale will Join?”

However, Bale’s time at Real Madrid has come to end. This athlete’s former club Tottenham is showing interest to sign the five-times UCL champions. Similarly, Seria A side AC Milan also has shown interest in him. Regardless, this top club, a championship club Cardiff City has also shown its interest in him.

Bale is the current captain for his nation Wales.

Wales is preparing for their Nations League match, which is going to be held in Poland. After that, Wales will face either Scotland or Ukraine in a WorldCup playoff final in Cardiff Sunday.

Considering all these things, it is still unknown which club Bale will play for. Fans are expecting Bale to make his decision after this match.

Gareth Bale announced he is going to leave the club from his social media platform, Twitter. It was an emotional farewell to the greatest player. Leaving the club after becoming the first British player to win the 5 Champions League. The humble, brave and great athlete has thanked everyone in his post, the post is shared below.