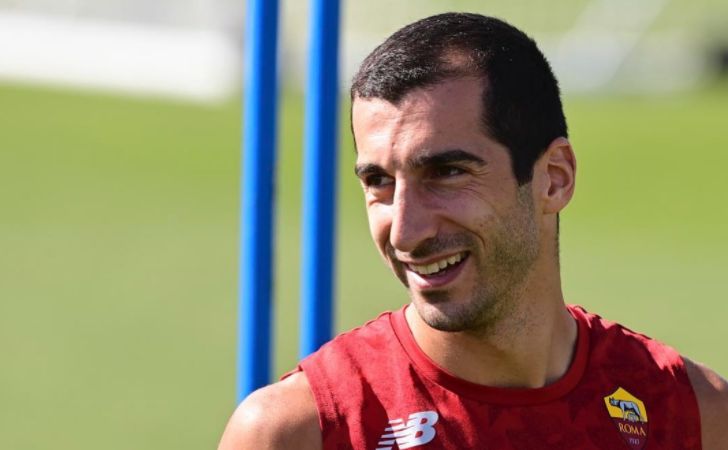 Henrikh Mkhitaryan is one of the best football players who can play excellently at the midfield and the winger position. Armenian football star Mkhitaryan plays for Italian football club AS Roma, after his transfer from Arsenal football club in 2020. Henrikh is also renowned by the nickname “Micky,” as his fans considered his full name to belong. The UEFA Europa League winner has played in many major tournaments with different European football clubs like Borussia Dortmund, Manchester United and Arsenal in his career.

This footballer is a versatile player who can play excellently as central forward, left midfielder, right midfielder, and attacking midfielder. Mkhitaryan has played for his national team Armenia for a long time, earning his 95 Caps till date after his debut in 2007. In adddition, he has won many major trophies like the Ukrainian premier league title and the UEFA Europa League title playing for different European clubs. Similarly, he is widely regarded as one of the top-rated midfielders of the game due to his agility visionary passing skills. His shooting skills, and versatility during the game. This biography on Roma football star Henrikh Mkhitaryan covers some of the important moments from his early life to date.

Armenian international Henrikh Mkhitaryan was born to their father Hamlet Mkhitaryan and mother, Marina Taschyan. Both his father and mother are from Armenia. His father was also a professional footballer in his playing days in the past. Henrikh was born in a middle-class family in Armenia called Yerevan. Mkhitaryan’s father died due to a brain tumor while still very young. According to his mother, he grew up playing football with his brother and friends.

Mkhitaryan’s family moved to France from Armenia due to internal conflicts. Hamlet Mkhitaryan used to work in the football club while he was still alive. Henrikh always requested his father to take him to the training ground with him. He was very good with the ball at his feet like his father even at that young age. Henrikh also played for a few years for a local football club in France after his family migrated. Motivated by his father, Henrikh has established himself as one of the best players in his position.

The UEFA Europa League title winner, Armenian international, was born on 21-01-1989, making him 33 years old. Henrikh follows Christian as the religion and his Zodiac (horoscope) sign is Aquarius. He is nicknamed “Heno” and “Micky” by his fans worldwide. His parents are one of the most influential persons in Armenian football history. Mkhitaryan’s mother also holds the position of head person in the Armenia football federation board.

Mkhitaryan has an athletic body and he stands 5.10 feet tall. Likewise, he has evenly matched weight for a professional footballer, as he weighs around 165 pounds (74 kilograms) at normal. He has brown colour eyes and black color hair. Henrikh is very professional and takes very care of his body, training, and diet even at 33. He has a chest span of 39 inches and a waist of 31 inches. Likewise, Henrikh athletic biceps measure 13 inches and he uses a shoe size of 10 (US).

Henrikh Mkhitaryan Salary and Net worth

Also known as “Micky” by his fans, Henrikh Mkhitaryan is believed to be worth around 4 million dollars to date. He has played for many richest football clubs like Borussia Dortmund, Arsenal and Manchester United, so a major part of his earnings salary, performance bonuses, endorsement, and sponsorship deals. Henrikh made 95 appearances for his national team after his debut in 2007. Henrikh has also earned a significant salary playing for his national team.

Who is Henrikh Mkhitaryan Wife?

The Armenian football star has said that his father is one of the greatest motivations for becoming a professional footballer. Henrikh Mkhitaryan is married to his lovely girlfriend, whom he had known for a long time. Her name is Betty Vardanyan and she is also from Armenia.

Currently, Henrikh do not have any information about her profession. We will update the information soon. The couple got married in 2019 while Henrikh was still playing for AS Roma. They are parents to one son whose name is Hamlet Mkhitaryan. The couple have named their son after his late grandfather. Henrikh and his wife have a huge following on their social media account like Instagram, Facebook, and Twitter. He has an athletic body and being a professional football player, Henrikh spends his significant time in the gym and training.

The UEFA Europa League winner Armenian international footballer is an intelligent footballer with beautiful trophy collections throughout his career. His versatility, passing and free-kick qualities make him one of the best midfielders in football. He has excellent dribbling and shooting skills even in the one vs one situations against the opposition goalkeepers.

This footballer has won several major trophies like the Ukrainian premier league title and UEFA Europa League title while playing many big football clubs. In his professional football career, he has played mostly as a central forward and sometimes as a left and right midfielder. Similarly,  Mkhitaryan is famous as an excellent free-kick taker in football.