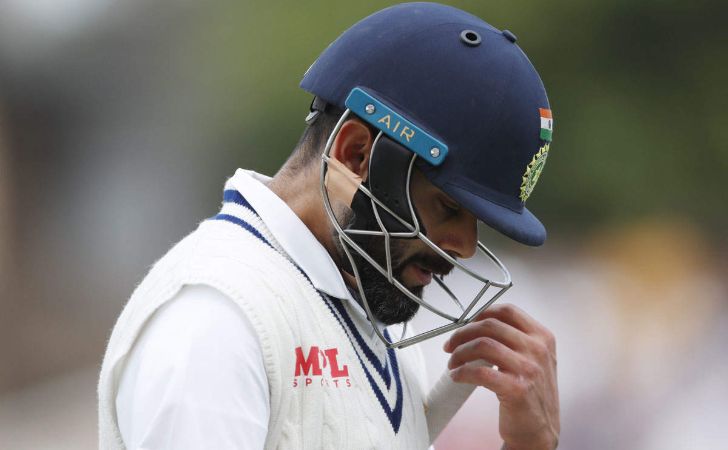 There was a time when runs for Virat Kohli was like a walk in the park. He used to score runs even in his sleep. But times have changed. There have been persistent queries like, is Virat Kohli finished? Where has the form gone? Was his runs scoring all a fluke. Well, that is not the case. Virat had some beautiful years from 2016 to 2018.

He was piling up runs for fun. There was no bowler or conditions in the world which could stop the great batter from scoring runs. But all of a sudden, his runs have come to a halt. Since 23rd November 2019, he has hardly got the opportunity to remove his helmet and show his prowess with the willow.

Is Virat Kohli finished is a query that has been circulating the park. As we all know, form is temporary, and class is permanent; he can quickly turn the events. For the standards the batter has set for himself, several centuries determine his ability with the stature.

In the way, there have been some hard-fought reasons why Virat Kohli’s form has been iffy. He has looked comfortable and also rushed down to get dismissed. At this moment, we will talk about the reasons for what is wrong with Virat Kohli. Please stick with us to know the worst-case scenario for the great batter.

Playing too much cricket and also traveling all around the world can be highly demanding for any cricketer. In all of that, Virat is an all-format player who knows how to get the job done. Captaining the side and being in the ultra-aggressive mode has hardly helped the runs to come.

Added to that, what doesn’t work in favor of Kohli is that he is aggressive in the game by nature. He is always looking to score runs and the game time fatigue is always the killer. So the biggest reason is Virat Kohli finished is mainly dependent upon the number of games he plays.

When Virat Kohli gave up the captaincy in the white-ball game, everybody knew that was coming. He had led India in multiple white-ball tournaments but could not get the job done. India was either losing in the semifinals or also in the finals. This never helped the case for the star batter.

As a result of all of that, Virat Kohli had to give up the captaincy of India. This captaincy dilemma provided a huge amount of challenges for the star batter. Half of the world thought that he should have stayed as the skipper, while half of them had different ideas. All of this created a huge mess and confusion.

When we look into the captaincy records of Virat Kohli, they are supreme to many. In the red ball game, he was able to win 40 games out of the 68 captained, which is highly impressive. Similar is the case in the ODI game where he was the skipper in 95 matches and won 65 out of it. Leaving the captaincy took a lot out of him.

One of the biggest reasons for the poor performance of Virat can be termed as the tussle with BCCI. All of this came to light when the star batsman went under the media’s scrutiny. According to sources, BCCI wanted Virat not to step down as the white ball captain for the time being.

But Kohli decided to give it up. As a result of that, BCCI made Rohit the captain of the ODI team, which was pretty surprising. Virat has confirmed that he wants to be well informed about the firing from the ODI captaincy position. He also added it came as a huge surprise to him.

On the other hand, BCCI didn’t comment much on this debacle, which worsened matters. Moreover, after all of the captaincy had gone from the hands of Virat, he decided to leave through the red ball game captaincy too after losing against South Africa. Things didn’t go well or were handled well after that.

The pressure of being Virat Kohli

There was a time when Sachin Tendulkar used to carry the Indian team on his shoulders. Virat Kohli did that for a very long time. For the reasons too is Virat Kohli finished, his stature does the job right there. This right-handed batter has been one of the best batsmen for India in the last decade.

Virat has the highest number of centuries during the chase to the readers unaware, which is tough to replicate for any Indian batter. Other than that, an average of 50 in all the game formats can also make the expectation of the fans and cricket experts go higher. If you dive deep, then he has been scoring runs.

Although there have been no centuries in the process, Virat has made crucial half centuries since his last century in the international arena. This right-hander also has the consistent pressure of being Virat Kohli and maintaining the same level of form and amount of runs. It is almost impossible to do that every day.

The last consistent reason for the write-up is Virat Kohli finished is about his age factor. Many cricket fans and pundits don’t talk about it, but it affects cricket players. Kohli is not getting any younger as he is 33 years old. This Indian batsman was in his prime from the 25 to 31 spectrum.

Since his age has crossed the 32 barriers, his hand-eye coordination has been lacking, saying the bit. At times, he has been poor against the short ball, which used to be his strength. The hands aren’t coming quickly enough to smother the spin. This also focuses on being a family man makes things more challenging.

After getting married, many things tend to affect the thought process, and similar has been with the great batter. This is a lean patch for him, and it will pass. But one also has to agree that we might have already passed the prime of the man who used to score runs like eating a cake.