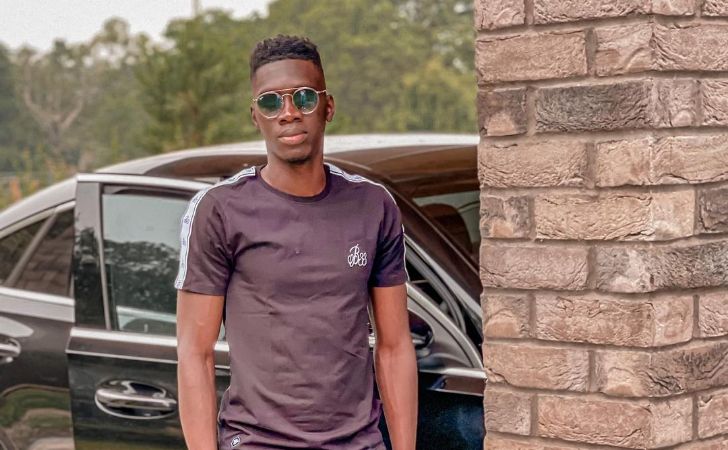 To begin with, Ismaila Sarr is a Senegalese professional football player. However, he currently plays for Premier League club Watford and represents the Senegal national team.

Additionally, he currently plays as a winger for both teams. However, Apart from his goal-scoring ability, the Watford winger is known for his pace, speed, and tactics, which have served him well in his career.

Moving further, the Senegalese winger, Sarr was brought to this world on 25th February, 1998 in Saint-Louis, Senegal. Thus, he is currently 24 years old.

Further, Sarr was born to a father, Abdoulaye Saar Naar Gaad, and a mother, Marieme Ba. Additionally, Sarr’s father played for the Senegalese national team in the 1980s.

However, he grew up in Saint Louis with his siblings, Papis Sarr, Kine Sarr, Badara Sarr, and Ndeye Ami Sarr. After his father retired from sports, he moved on to other occupations to make a living. Later, Sarr was enrolled at the Oumar Syr Diagne School in St. Louis, Senegal.

Sarr despised studying and reading books but still did it for formality. In fact, he would avoid going back to school and instead spend his time with his friends playing football. Unfortunately, when his parents became aware, they took action, suspending him from school and sending him to learn to tailor.

However, he worked hard on this throughout his tailoring classes. Nonetheless, his passion for football never vanished. As a result, he abandoned tailoring and pursued football without the agreement of his parents.

Starting off, this Senegalese winger has a fantastic physique. In terms of height, he stands at 6 feet 1 inch tall and weighs approximately 76 kg or 167 lbs.

Similarly, Sarr has a lean physical appearance. In addition, his hair is black, and his eyes are brown. However, Sarr’s zodiac Sign is Pisces, which entails that he is emotionally fragile, hardworking, courteous, and emotionally observant. Additionally, Sarr seems to be of Senegalese nationality.

Moving further, Sarr started playing football at a young age. When he was 11 years old, he enrolled in Generation Foot youth academy in 2009. However, he remained with the club till 2016.

Sarr’s only youth academy experience was with Generation Foot before joining FC Metz in 2016.

On 13th July, 2016, Sarr decided to sign his first professional contract with FC Metz on a five-year contract. However, he made his first appearance on 23rd August, 2016 in a 3-2 victory over Lille OSC. Later, he was substituted after playing for 20 minutes.

Overall, he appeared in 32 games for Metz, scored 5 goals, and assisted 4 times.

Moving further, on 26th July, 2017, Sarr signed a four-year contract with Rennes on a reported fee of 17 million euros.

Sarr scored twice in the second half as Rennes booked their place in the 2018/19 UEFA Europa League elimination round with a 2–0 decisive victory over FC Astana on 13th December, 2018. Overall, he appeared in 77 games for Rennes, scoring 18 goals while assisting 16 times.

Moving further, Sarr decided to sign a five-year agreement with Premier League team Watford on August 8th August, 2019, for an estimated fee of £40 million. However, He managed to score his first goal for Watford in an EFL Cup match against Coventry City on 27th August, 2019.

Further, on 29th February, 2020, Sarr scored twice and assisted once in Watford’s 3-0 home triumph over defending Liverpool, giving them their first defeat of the 2019/20 season and breaking the club’s 44-match undefeated league streak. Likewise, Sarr scored from the penalty spot in Watford’s win over Millwall in the Championship on 24th April, 2021, securing Watford’s return to the Premier League after one season.

As a result, Sarr finished the 2020/21 season as Watford’s leading scorer, with thirteen goals. Additionally, he also scored in the opening game of the 2021/22 Premier League season in a 3-2 victory over Aston Villa.

Moving further, before representing Senegal’s senior team, Sarr has also represented Senegal’s under-23 team. At the age of 17, he competed in the 2015 Africa U-23 Cup of Nations. However, Senegal finished fourth in the competition.

In September 2016, he made his debut for the Senegal national team in a match against Namibia for the 2017 Africa Cup of Nations qualification, for which Senegal already had qualified.

Sarr managed to score his first international goal in a friendly game against Libya on 8th January, 2017. Later, he was also selected for Senegal’s 23-man team for the 2018 FIFA World Cup in Russia in May 2018.

Sarr was a member of Senegal’s team that managed to reach the Africa Cup of Nations final on 19th July, 2019, where he played the entire 90 minutes. However, they were defeated by Algeria.

Overall, the Senegalese Winger has appeared in 39 matches for Senegal National Team and scored 9 goals.

Is Ismaila Sarr Married? Does he have Children?

Ismaila Sarr is presumably unmarried. He has, nevertheless, kept his personal life quite confidential and secure. However, Ismaila Sarr, a 23-year-old Senegalese winger, has a woman in his life whom he loves as much as he loves playing football.

Apparently for those who like to learn more about the gorgeous lady, not much has been known about her. This is because Ismaila Sarr and the lady have maintained their relationship private. Additionally, Watford winger Ismaila Sarr recently shared a picture on Instagram of himself and his girlfriend on a cruise ship.

However, pertaining to Ismaila Sarr’s sexual orientation, he is straight.

Moving further, the Senegalese winger is more of a galloper than a dribbler. His stride is gigantic, and even though standing over six feet tall, he manages to glide effortlessly through opposition challenges.

Furthermore, Sarr is a strong counter-attacking asset capable of dribbling near the touchline or in-field, rather than a classic winger.

However, that doesn’t mean he isn’t strong in one-on-one situations; he is unique and highly crafty in this regard. When a counter-attacking option is not available, he prefers to lure in his opponent by delaying himself.

Likewise, the range of strikes he can execute from a distance demonstrates his undoubted talent. With Rennes, he scored some spectacular goals. Also, in the Europa League, his volleyed pile-driver against FK Jablonec was one of the most technically beautiful goals scored by any player that season.

Moving Further, Ismaila Sarr has a FIFA 22 overall rating of 77. Meanwhile, his potential rating is 83, and his position on the field is RW (Right Winger).

What is the Net Worth of Ismaila Sarr?

Further, Ismaila Sarr connects and socializes with his followers on various social media platforms such as Twitter, and Instagram. Additionally, the Senegalese winger generally posts about the matches, family, vacations, and endorses brands through social media.

Sarr plays as a right-winger for premier league club Watford.

Ismaila Sarr is not married yet, however, he is dating someone whose identity is still unknown.

Ismaila Sarr is of Senegalese nationality.