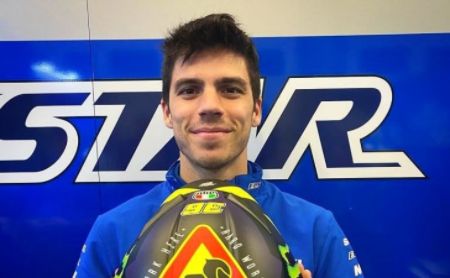 Joan Mir is a Spanish professional road racer currently competing in Grand Prix motorcycle racing. He has both aggressive and smooth riding. Smooth riding helps him protect the bike from any faults, and aggressiveness helps him give tough competition to other riders.

In 2017, he won the Moto3 World Championship, scoring 341 points, riding a Honda. In 2020, he became the MotoGP World Champion riding a Suzuki, scoring 171 points and his season’s performance being one of the best performances of his road racing career.He moved up to the MotoGP class in 2019, joining the Team SUZUKI ECSTAR.

The first season in MotoGP was a little disappointing, as he finished in 12th position. He has been with the same team since the beginning of his MotoGP career.

Joan Mir Mayrata was born on 1 September 1997 in Palma de Mallorca, the capital and largest of Balearic Islands in Spain. His father’s name is Joan Mir Senior, and his mother’s name is Ana Mayrata. His father was not supportive of his road racing career initially, but he started supporting Mir later.

He was inspired to be a road racer by his uncle Joan Perelló. His uncle used to be a professional road racer who participated for years in the world championship with the Stop & Go team.

His sibling’s information and his parents work-life are under review and will be updated as soon as possible.

There is not much detailed information available about his education on the internet. However, the information will be updated as soon as possible.

Motogp racer Joan Mir was born on 1 September 1997 in Palma de Mallorca, Spain. Mir  is 24 years old at the moment. His sun sign is Virgo. Joan has a height of 5 feet 9 inches and weighs around 69 kg. He follows the Christian religion.

His eyes and hair are dark browns. Joan shoe size is 8 (US), and his body measurements are under review at the moment and will be updated as soon as possible.

Who is Joan Mir girlfriend?

Joan Mir is currently dating Alejandra Garro. When they started dating and how they met are not known and will be updated as soon as possible. Alejandra Garro is a supportive girlfriend. She can be seen cheering Mir on tracks and always is with him on award function and other functions.

This beautiful couple’s picture can be found on their social media accounts.  Some reports suggested that Joan Mir was at least in one relationship before he was dating Alejandra Garro.

Further information about his personal life will be updated as soon as possible.

Joan Mir will use the AGV PISTA GP RR helmet in 2021. Monster’s logo and his bike number artworks can be seen on the side of his helmet.

Blue, yellow and black is the majority colors in his helmet.

Joan Mir joined Team Suzuki Ecstar at the beginning of the 2019 season.

During the beginning of his career in 2015 in the Moto3 Championship, he was with the Leopard Racing team riding a Honda. He stayed with the same team in his moto3 career.

Joan Mir Salary and Net Worth

Joan Mir is currently with the Team Suzuki Ecstar.

Joan Mir‘s net worth is $40 million as of 2021. His overall salary and net worth are from racing, sponsorships, and endorsements.