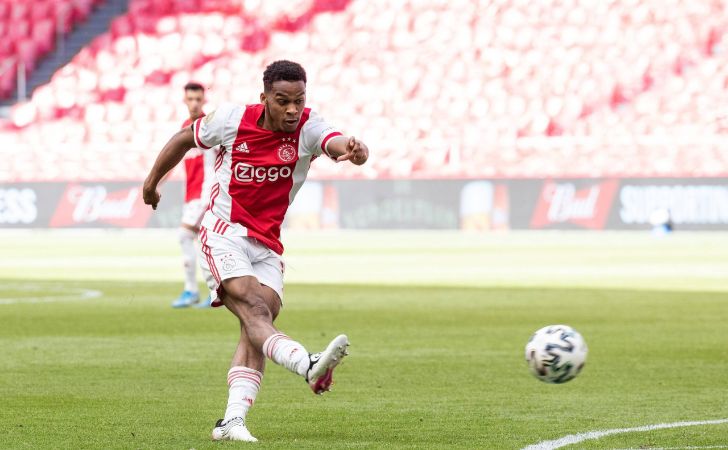 One of the youngest players Jurrien David Norman Timber is commonly known as Jurrien Timber in the football world. Currently, this athlete is playing for Ajax and Netherlands National teams. Paring with Virgin Van Dijk and  Matthijs De Ligt he has great potential for defending.

Primarily, he plays as a central defender but according to tactics he can also play as a right back.

However, Dutch players are globally renowned for their art of defending. Players like Aron Winter, Ruud Krol, Ruud Gullit, Frank de Boer, and Jaap Stam were some of the greatest defenders in the world who were all Dutch.

Following the footsteps of such legends, Jurrien Timber has also established himself as one of the best players on the Dutch National team.

Dutch defender  Jurrien Timber was born on 17 June 2001. Along with his identical twin (Quinten), he spent the majority of his childhood in Utrecht, Netherlands. This athlete gets life along with his twin brother as the fourth son of the Maduro family.

Timber families have all sons which mean there are no daughters in their family. This Dutch athlete has no sister. Jurrien spends his childhood years playing and enjoying with his full and half brother. According to research, Marilyn Timber raised all of her sons alone herself.

Jurrien Timber’s twin status made his family quite well-linked in their neighborhood. Both kids were very much identical from their childhood. It was really hard to even for their relatives to identify when they wore the same clothes and have the same haircut. Everything was common from the early days.

Both lads at that time loved soccer. The Timber twins were football players with a lot of potential in addition to being fans. When the twins were young, it was really difficult to ignore their talents. It was their’s mother Marilyn who was a very supportive, loving, and caring woman. That, together with Marilyn’s help, they started their early career off on a strong platform.

Marilyn was a deeply religious strong woman. After getting divorced from Mr.Coffie she decided to focus more on her career. Her two elder son Christopher and Shamier’s father was her previous husband, Mr. Coffie.

After her divorced, She encountered a man, Mr. Maduro, in her dance community. He was the man who went to be the father of Dylan, Jurrien, and Quinten Timber. With the new lover, Marilyn had her youngest children twins Jurrien Timber and Quinten Timber.

Both Marilyn and her new partner were from Curaçao, a country in the Dutch Caribbean. The father of Jurrien Timber suddenly made the decision that he want a shift to the warmer climate. Likewise, he made a decision to go to Curacao from the Netherland in search of a warmer environment.

At first, Mr. Maduro said the choice was just temporary. Unlikely, that wasn’t the case. Unfortunately, Jurrien Timber’s father never showed up. Marilyn Timber had to go through yet another hardest time in her life. This time, she had to overcome the challenge of raising five boys without the help of their two fathers.

During those difficult times, Marilyn Timber received help from her sister named June Timber. At present, Mrs. Marilyn Timber is a proud mother where all of her sons are successful either in sporting or non-sporting professions.

Marilyn owned Catholic schools as she was a strong religious devotee woman. She made sure that all of her sons attended Catholic schools on her own, without any help from their fathers. However, In De Spits Primary Jurrien’s mother registered him and his identical twin, Quinten.

The twin brother used to sit together in the classes while attending school.  It wasn’t easy for their children to recognize them so they used to occasionally wore different colored sweaters.

This athlete holds the dual citizenship of Curacao and the Netherlands. His parents were of Caribbean ancestry similar to Marcus Rashford’s. A Dutch Caribbean Island Curacao is well recognized for its fabulous beaches.

This defender’s ethnicity is mixed Afro-Dutch or Black-Dutch. As we know, he specifically belongs to the Dutch-Curacao ethnic group. Due to his parents sub- Saharan African origin, he is Black.

However, this defender is 1.79 m tall which means he is 5 feet 10 inches tall. Dutch international is wearing jersey number 2 while representing his in any professional matches.

Generally, defenders really need to be strong compared to other position player. As we know, defenders have the responsibility to stop the world’s best striker. Based on the requirements, this athlete likes to be in perfect shape. For that purpose, he spends most of his time in the gym.

Although this player is only 21 years old his body weight is 79 kg which is 174 lbs. Likewise, he has the choice to choose his nationality but in the end, he choose to play for the Dutch national team.

This athlete has a beautiful pair of black eyes and black hair. His vision and composure in the game are exceptionally world-class. Timber’s personality is great on and off the pitch.

Due to his excellent physique, he has excellent defending. Unfortunately, his chest, biceps, and waist measurement aren’t available as of now.

In the first place, Dutch players are globally known for their art of defending. There are good defenders, there are great defenders and then there are Dutch defenders. Rudd Gullit , Frank Rijkaard , Ronald Koeman , Virgil Van Dijk and Matthis De Ligt are some of the greatest defenders.

Current Ajax’s defender has completely redefined his role of defending well. Starting his career from an early age, following the footsteps of such a legendary player has always been a plus point for him.

Although he has the ability to play as a right-back, he preferred to play as a center-back. Jurrien Timmer is a right-footed player and wears jersey number 2.

From representing the Netherlands in various age-level tournaments to playing for the senior squad, Jurrien Timber has really worked hard. This 21-year-old defender’s work rate is high/ medium.

Despite having a potential rating of 88 meanwhile, this defender has an overall rating of 79. Based on our database his rating on different abilities are listed below:

In the first place, being a defender his defending skills are exceptionally brilliant. On the other hand, his crossing and finishing are weak. This athlete has a similar FIFA rating to Manuel Akanji, Vladimir Coufal, Boubacar Kamara, and Victor Lindelof.

Who is Jurrien Timber Wife?

Love is essential in human life to move forward. The success, he has received at such a younger age is phenomenal. It is accurate to mention that the Dutch-Curacao star is a successful footballer. Without a doubt, there is numerous lady who wanted to be the partner of this humble man.

Jurrien Timber posted a picture of him on social media where very few portions were seen of a lady who is believed to be his girlfriend, Marisol. Besides this, there isn’t much information available about his love life.

Although this may be true, the relationship is particularly sensitive for celebrities. This is also applied to Jurrien Timber as he is also listed as a big personality. In other words, we couldn’t locate much information about his marital status.

No matter what, Playersaga will update the information about his marital status and about his children as soon as it becomes available.

Every athlete salary and net worth are determined by their performance on the pitch. This athlete has made a lot of money throughout his professional football career. Along with his football career endorsement, sponsorship has also supported him to increase his net worth.

This Dutch defender signed a new contract with Ajax in September 2020. It is reported that his current club is paying his an attractive salary of 900 thousand euros which is 757 thousand pounds.

After crunching the number, it takes more than 2 years for a  normal person to make the amount of money that this 21-year-old athlete does in one month. When it comes to driving, this humble player prefers to drive fancy bikes.

Defender Tim was only allowed to buy a car after he reached 20 years. As of now, he is looking forward to purchasing a new vehicle. Jurrien Timmer is living in Amsterdam where he owns his own Manson. Currently footballer Jurrien net worth is 1.8 million euros. Similarly, his market value is 30.5 million euros. It is important to realize that he is only 21 years old. This defender is still young and has got plenty of years to showcase his talent.

A wall of Ajax has thousands of followers from all over the world. Whenever this professional player gets time from his busy schedule he spends it scrolling social media. Especially this defender posts his picture along with his friends.

To demonstrate, this center-back also prefers to post pictures of his achievements which inspire millions of people all over the world. Likewise, his social media presence is:

This Dutch defender started his youth career at DSVU. He spent two years in the DSVU youth academy before moving to Feyenoord youth academy in 2008. Defender Tim spent his six years in Feyenoord’s academy where he developed as an important youngster in the academy.

During his training days, some of the lads on Jurrien’s team were jealous of him. He was a very dedicated and hardworking player whose daily schedule consists of training, school, and sleeping.

After spending 6 years with Feyenoord, he joined Ajax youth academy in 2014. Thus the hard work of Jurrien Timber gets paid off when he was listed in the senior squad for the Ajax team for the first time. On 7th March 2020, Jurrien Timber made his senior debut with Ajax against SC Heerenveen.

Though he was playing as a central defender his first goal came on 2 May 2021. He netted his first goal over Emmen which eventually lead Ajax as the winner of the Eredivisie champion.

During his club carrier, he has played more than 115 games for Jong Ajax and Ajax scoring 4 goals for Ajax’s senior team. Likewise, he was also selected for the Dutch International squad for UEFA EURO 2020 and also for Louis Van Gaal’s Worldcup 2022 for the Netherlands.

At the international level, this 21-year-old athlete has played Under-17, Under-19, and Under-21 before making his way into the senior team. It was against Scotland on 2 June 2021 that he made his senior team debut.

One of the most demanding defender’s successes is neither overnight nor by accident. This success is because of his hard work, sacrifice, and perseverance. Maybe, he wouldn’t have been the successful player if he had stayed with Feyenoord.