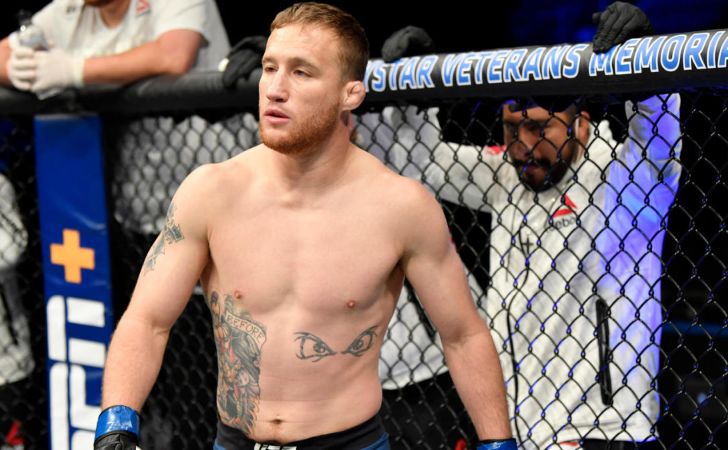 Justin Gaethje is a professional MMA fighter from the United States. He now fights in the Ultimate Fighting Championship’s Lightweight category (UFC). He was once the Interim UFC Lightweight Champion. Justin is currently ranked first in the UFC lightweight rankings as of April 2022.

Justin is an extremely bright person well-known for his humorous but sometimes unrestrained trash talking before his fights. Gaethje has built a rivalry with other UFC fighters due to his outspoken approach.

So, if you like Justin Gaethje and want to learn more about him, please read the article below.

As a result, let us get started right away with quick facts.

Justin Gaethje, born in Safford, Arizona, began wrestling when he was four years old. As a wrestler at Safford High School, he was a two-time Arizona state champion and an NCAA Division I All-American at the University of Northern Colorado. Justin began his amateur MMA career in college. He became pro in 2011, and joined the World Series of Fighting (WSOF) in 2013, where he won Lightweight Champion.

MMA fighter Gaethje was born in Safford, Arizona, on November 14, 1988. His mother name is Carolina who is of Mexican heritage . Justin father’s name is John Ray Gaethje a German descent. His mother worked as a postmaster. Likewise, his father and both of his grandfathers were copper miners. MMA fighter Gaethje has two younger sisters. Marcus John Gaethje, his twin brother, also worked in the Morenci mine for over ten years.

Justin went to Safford High School and was a four-time finalist and two-time state winner (AIA). As a wrestler, he still has the seventh-most near falls (218) and the ninth-most team points earned (1057.5) in state history.

Gaethje graduated with a 191–9 record from Safford High School. Justin applied to a tiny institution in Arizona because he wanted to be near his family, but he accepted an offer from University of Northern Colorado instead.

Gaethje had an 18–9 record as a rookie, including a third-place finish at the Oregon Wrestling Classic. Gaethje’s induction into the University of Northern Colorado Athletics Hall of Fame was announced in June 2020.

Justin’s physique dimensions are 42-33-16 inches, and he wears a size 10 U.S. shoe. Gaethje’s hair is brown, and his eyes are black. Justin’s zodiac sign is Scorpio, which explains his obstinate and wild disposition. These folks don’t always care how their thoughts or behaviors influence others. They are typically vicious and will use whatever means required to attain their objectives.

Justin is of mixed ancestry and is of American nationality. As a child, he practiced Christianity. Justin Gaethje is quite interested in sports, particularly football, in terms of hobbies and interests.

Justin Gaethje is a high achiever who enjoys having fun every day. He is a very close and cool individual who spends the entire day practicing for the battle.

UFC 254: Khabib vs. Gaethje was a mixed martial arts event held on October 24, 2020 at the du Forum on Yas Island in Abu Dhabi by the Ultimate Fighting Championship.

Gaethje fought Khabib Nurmagomedov in a unification fight for the UFC Lightweight Championship on October 24, 2020, at UFC 254. He lost the fight through technical submission in the second round due to a triangle choke, his first submission loss in his mixed martial arts career. Despite tapping, referee Jason Herzog did not halt the fight until Gaethje passed out from the choke.

Chandler (22-7) survived the bout, but Gaethje (23-3) gradually and deliberately dismantled his opponent. Gaethje and Chandler met on the undercard of UFC 268: Kamaru Usman vs. Colby Covington II at Madison Square Garden.

At UFC 274, Justin Gaethje had another shot at the lightweight championship. Gaethje will face champion Charles Oliveira, who won a dramatic title defense against Dustin Poirier. Following some recent adjustments to the bill, that fight will serve as the night’s main event.

The event which will take place on May 8, 2022, was recently revealed.

Who is Justin Gaethje Wife?

Justin Gaethje has not yet spoken publicly about his love life or private life. Despite the fact that he is frequently active on his social media accounts, he has not disclosed the identity of his partner. Furthermore, we are unable to disclose his present relationship status. We will keep you updated as soon as we learn more about his love life and relationship.

MMA fighter Gaethje has a net worth is estimated to be $4 million as of 2022. Justin’s primary source of income is his fighting, since he is one of the company’s highest-paid fighters.

According to sources, Justin earns around $1.2 million every fight. Justin’s fight purse is between $1 million and $2 million every bout. However, Justin’s largest bout purse was not in MMA, but in boxing. His exhibition battle versus Khabib Nurmagomedov was a multi-million dollar boxing match in which both combatants took home large sums of money.

Justin makes the majority of his money not just from fighting in the Octagon, but also through lucrative sponsorship deals. Reebok, ONX Labs, MyBookie currently sponsor the American fighter.ag, Landow Performance, Waiakea, Cannadips, and Gains in Bulk, Prairie Fire Strength, Jose Cuervo USA, and others.

With Justin’s career still in its early stages, the 33-year-impact Old’s is projected to grow, making him a very marketable athlete. As a result, Justin’s endorsement revenues are expected to skyrocket in the future years. Furthermore, when he fights Michael Chandler at UFC 268, “The Highlight” will try to enhance his Net Worth even more.