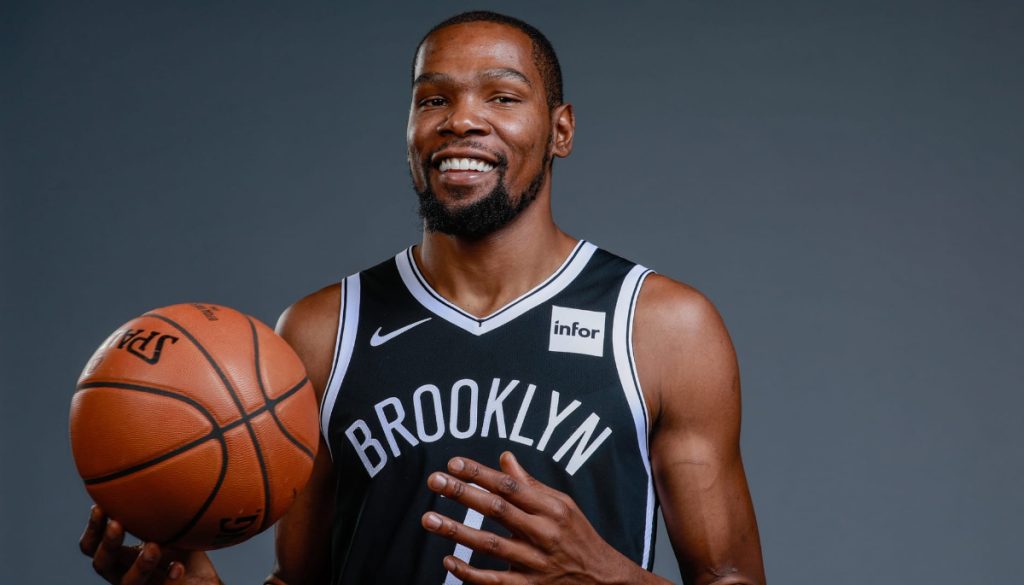 Kevin Wayne Durant is a well-recognized face in the basketball world. In this article today ,we will discuss Kevin Durant net worth.

Durant currently plays for Brooklyn Nets in the NBA. The power forward has been in NBA for over a decade now. The small forward has also won 2 back to back Championship Rings with Golden State Warriors.

This article will mainly focus on Kevin Durant Net Worth, Salary, Investment.

Durant is one of the highest-paid basketball pros. The small forward has a net worth of $200 million in 2022. Thanks to his successful basketball career and his deals and endorsements with many brands.

Earning from the Court

Kevin Durant signed his first NBA contract in 2007 with the Seattle Supersonics. This four-year deal was worth $19.5 million. Moreover, the small forward also earned an annual salary of $4.8 million.

Furthermore, Durant later bagged a five-year deal in 2011 and the deal was worth $89 million along with a base salary of $17 million. Likewise, the small forward later signed with the Golden State Warriors in 2016.

Kevin pocketed $54 million in a single year from his contract with the Warriors. Moreover, the small forward earned $25 million in 2017 and $30 million in 2018 as a salary.

Speaking of now, Durant is currently signed with the Brooklyn Nets on a 4-year contract. This contract is worth $164 million.

Additionally, Kevin is guaranteed $159 million from this contract with an annual salary of $41 million.

Kevin Durant’s face is very marketable. Moreover, his 2 consecutive NBA titles with the Warriors have made him a household face. It’s no doubt that this player has deals and endorsements with some world-famous brands. Some of them are below:

Nike has made some huge investments when it comes to basketball. This world-famous brand has now become one of the dominating brands in the world.

Just like other NBA superstars, Kevin has also made endorsement deals with Nike.

His deal with Nike for shoes and apparel is worth $26 million. Likewise, Nike and Kevin launched the 2011 2011 KD 4s which proved to be a success in the market. KD13 are his recent shoes that got launched in 2020.

Eventually, the small forward’s deal with Nike validates for 10 years and is worth $275 million in total.

The small forward has also signed with other famous brands such as Sparkling Ice, Panini, 2k sports, Beats by Dr. Dre, and so on.

Moreover, back in 2014, Kevin was also seen in an advertisement for Google along with celebs like Sia, John Legend, and Chrissy Teigen. Lastly not least, Durant also has a 10-year deal with the Swoosh.

The deal is worth $300 million along with the retirement package of $50 million.

Kevin Durant is a focused man and he has set himself up nicely for his upcoming future. Durant currently Co-owns an Investment Firm named thirty-Five Ventures. All of Durant’s investments are made through this capital firm.

Speaking of his investments, Durant has already made 17 investments in total. The small forward’s investments are classified and diversified in various markets.

He has done investments in the likes of Sandbox VR, Yoshi, Rubrik, Whoop, Robinhood, Postmates, and more.

Moreover, the 2 times NBA champion recently did a $6 million investment for the Seed Round.  Likewise, the small forward also purchased himself a stake in the MLS football team Philadelphia Union. I guess he surely can count on that.

Durant is very philanthropic in nature. The small forward gives away some of the portions of his earnings to the needy ones.

In 2013, Durant started a charity foundation the name Kevin Durant Charity Foundation(KDCF). Moreover, its mission is stated below:

“To enrich the lives of at-risk youth from low-income backgrounds through educational, athletic, and social programs.”

Likewise, Kevin was also involved as the spokesperson for the Washington D.C branch of the nationwide non-profit after-school music program-P’Tones Records. Moreover, the small forward also donated $1 million for the 2013 Moore tornado.

The Brooklyn Nets star was born as Kevin Wayne Durant on 29th September 1988. Kevin was born in Washington D.C, USA to father Wayne Pratt and mother Wanda Durant. Moreover, his father abandoned his family when Kevin was just an infant.

Durant was raised by his mother and his grandmother Barbara Davis alongside his 3 siblings. Kevin has a sister named Brianna and his two brothers are named Tony and Rayvonne. The small forward and his siblings grew up in Prince George’s Country, Maryland.

It was during that time he played with future NBA players like Micheal Beasley, Greivis Vasquez, and Ty Lawson.

After that, he was sent to Oak Hill Academy where he played for 1 year. Eventually, Kevin was transferred to Montrose Christian School for his senior year.

Eventually, after the completion of his high school, Kevin was committed to the University of Texas at Austin. The small forward was an incredible basketball player in his college days.

His amazing performances earned him the MVP of the 2006 McDonald’s All-American Game. Moreover, he was also widely regarded as the 2nd best high school prospect of 2006 just behind Greg Oden.

Speaking of Kevin Durant’s age. The NBA star was born on 29th September 1988. This makes him 34 years old currently. Moreover, the 34-year-old small forward is currently 109 kgs and stands at an impressive height of 6 feet 9 inches tall.

Likewise, the NBA star has an oval-shaped face with dark brown hair and black eyes. Kevin belongs to the African-American ethnicity and has American nationality. Furthermore, the Nets’ small forward has a fair skin tone. Lastly, his zodiac sign is Libra.

Who is Kevin Durant Wife?

NBA Kevin Durant hasn’t yet gotten married. He has been in a relationship with Cassandra Anderson right now. Since 2017, the couple has known one another.

Kevin has had relationships before, but this one is not his first.
He once had a relationship with WNBA player Monica Wright. Additionally, he dated a number of women, including Brittney Elena, Jasmine Shine, Dai Frazier, and others.

The small forward was selected as the 2nd overall pick in the 2007 NBA Draft by the Seattle SuperSonics. Durant was named the NBA Rookie of the Year in his 2007-08 season. Likewise, he averaged 20.3 points, 4.4 rebounds, and 2.4 assists per game in his rookie season.

Moreover, the small forward was the 3rd teenager after LeBron and Carmelo Anthony in league history to average at least 20 points per game in an entire season.

Furthermore, Durant played his 1st NBA Final with the SuperSonics in 2012. The small forward led his team to NBA Finals with 30.6 points per game on a shooting rate of 54.8. Eventually, Seattle lost the final to Miami Heat.

Furthermore, he was also voted the MVP of the season for his outstanding performances.

Durant was signed to the Warriors on 7th July 2016. However, he was backlashed by the fans for joining the Warriors, who had defeated his former team to shut their ways to the finals.

This brilliant performance by Durant helped the Warriors claim their 2016-17 Championship Ring. Moreover, the NBA star was also named the NBA Finals MVP for his electrifying performances.

Second Championship with the Warriors

After the Championship title of 2016-17, Durant re-signed with the Warriors for less money than before. He did this with the intention to help the franchise create enough salary caps and add free agents.

Moreover, in Game 3 of the 2018 NBA Finals, Durant scored his career-high 43 points, 13 rebounds, and 7 assists to win over Cleveland Cavaliers.

Once again the Warriors claimed their 2nd Championship Ring in a row with the help of Kevin.

The small forward signed a sign-and-trade deal with the Nets on 7th July 2019. However, Durant didn’t play a single game in the 2019-20 season due to his injury. Later, on 17th March 2020, he tested positive for COVID-19 and missed the half-season.

Eventually, Kevin made his Nets debut on 22nd December 2020. Durant guided his team to the playoffs with his amazing skills on the court.

Moreover, the small forward also signed a 4-year deal worth $198 million with the Nets.

Sadly, despite the brilliant performance by Durant, the Nets were eliminated by the Boston Celtics in the playoffs. The Brooklyn Nets were clean swept by the Celtics with a 4-0 victory in the series. Moreover, Durant was swept for the 1st time in his 14 years career.

As of 31st June 2022, the small forward has requested a trade from the Brooklyn Nets locker room.

Durant had an average of 22.8 points, 6.1 rebounds, 3.1 assists, and 1.4 steals per game in his 9 matches. This electrifying performance won him the tournament MVP honor.

Likewise, Durant also helped Team USA to win the gold medal in the 2012 Olympics. The small forward averaged 19.5 points, 5.8 rebounds, 2.6 assists, and 1.6 steals per game. Moreover, he was the lead scorer with 30 points in the final game.

Furthermore, Kevin again won the 2016 Olympics gold medal with his team. Likewise, the small forward once again led the Team USA to a gold medal in the 2021 Olympics. Moreover, he also won the FIBA tournament’s MVP.

Kevin Durant net worth if $200 million.