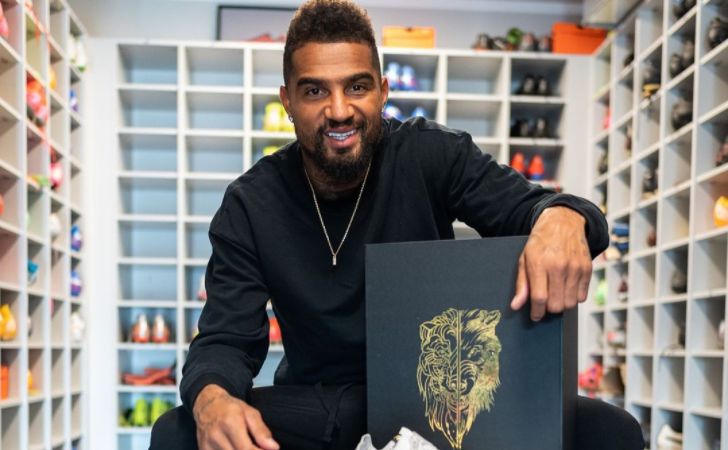 Kevin Prince Boateng is one of the best midfielder or forward players in modern Football. Ghanian international professional football player Boateng plays for football club Hertha BSC after his transfer from Italian club Monza in 2021. Footballer Boateng is a very versatile player who can play excellently at the midfield and forward positions.

He has played as a striker, right midfielder, Left midfielder, and center attacking midfielder position (usual position). Boateng was born on 6th March 1987 in Berlin, Germany, and his full name is Kevin Prince Boateng. He played for his national team for around four years between 2010 and 2014, earning 15 senior Caps since his debut in 2010. Kevin could have played for the German national team. However, e choose to represent Ghana as his national football team.

He has won many major trophies, including Spanish and Italian league titles and another domestic cup. Likewise, Kevin is widely regarded as one of the finest attackers of the game due to his intelligence, leadership quality, and versatility during the game. This biography on football star Kevin Prince Boateng covers some of the important moments from his early life to date.

Ghanaian international Kevin Prince Jerome Boateng was born to his Father, Prince Boateng, and Christine Rahn. He was born to a middle-class family in Berlin, Germany. His mother was German, while his Father was originally from Ghana. According to his parents, he would often play in the ground and his backyard with his friends during his early childhood. He is also the brother of Jerome Boateng, who plays for the German national team. The brothers even faced each other during a match in the world cup.

The talented child was soon recruited in the ranks of the football club Hertha BSC youth team and later in reserve.  Boateng played with number 27 on his jersey during his days at Milan, who now also wears the same number 27 at his current club Hertha BSC. Likewise, he played with number 23 in his national Jersey and Boateng as his name in his club as well as his national team kit. Starting as a winger back in his early days, he excelled at many midfield and attack positions.

In FIFA 22, his overall rating is 78, with a potential of 78. Boateng has a skill-moves rating of 4 stars. He shoots with his right foot more often than with his left.

His most impressive statistics are: Ball control is 84, shot power is 84, aggression is 82, composure is 82, and volleys are 82.

Kevin Prince Boateng was born on 6th March 1987, which makes him 34 years old now. He was born in Berlin, Germany, and his full name is Kevin Prince Boateng. He follows Islam as the religion, and his Zodiac (horoscope) sign is Pisces. As per his FatherFather, he was always playing football with the children in their neighborhood. Delighted by his talent, he was recruited into the ranks of the Hertha BSC youth team. Since then, he has been playing at a high level, making him one of the best players in modern Football.

Boateng has an athletic body and, he stands 6.1 feet tall. He has evenly matched weight for a professional footballer, as he weighs around 168 pounds (76 kilograms) at normal. Likewise, he has black colored eyes and completely black hair. He is very professional and takes very care of his body, training, and diet. Even at the age of 33, he performs very solid at the backline, making him a crucial part of the squad. He has a chest span of 41 inches and a waist of 31 inches. Likewise, his athletic biceps measure 14 inches. Likewise, he uses a shoe size of 12 (US).

Kevin Prince Salary and Net worth

According to multiple sources, Kevin Prince Boateng is worth around $20 million to date. Boateng has played for many big clubs like AC Milan, Tottenham Hotspurs, and Barcelona, so a major part of his earnings constitute football Club salary and additional bonuses, endorsement, and sponsorship deals. Ghanian international Kevin Prince Boateng has played for his national team for four years, earning his 15 Caps to date after his debut in 2010. Kevin also earned a significant salary from his national football team.

He earned a huge salary and bonus for two seasons when he signed for English club Tottenham Hotspur for around 8 million dollars. Kevin later signed for one of the richest football clubs AC Milan, for around three years. He has made significant earnings in salary and performance bonus while at the club. It is believed that the veteran footballer is going to sign the contract extension with Hertha BSC when his contract expires. Boateng is also a fashion fan and has multiple expensive and fine cars in his collection.

Ghanaian international Jerome Boateng follows Islam, and his Zodiac sign is Pisces. Boateng is unmarried to date, but he had been in a relationship with women in the past. Footballer Kevin was previously in a relationship with a woman whose name is Jennifer Michelle. When he was in England playing for Tottenham Hotspurs, the couple got married and were legally divorced a few years later. She sometimes used to be seen attending her ex-boyfriend’s games.

Kevin Prince Boateng also has a daughter named Jermaine Prince Boateng with Michelle. He was also in relation with another woman whose name was Melissa Satta. The couple is the parents of a beautiful child whose name is Maddox Prince Boateng. The couple recently announced they were working on a divorce a few months ago. Boateng himself is also a Fashion fan. He has a huge following on Instagram, Facebook, and Twitter.

Kevin Prince Boateng is an intelligent and versatile footballer who has played for many football clubs throughout his career. His unique style and versatility make him one of the best attackers in Football. He can play in the midfield as well as the forward position whenever his team requires. He has good passing, crossing, shooting, and dribbling abilities, making him an all-around footballer. His brilliant performance throughout his career has earned him the trophies like the Italian league title and the Spanish league title.

He has played mostly at the heart of the midfield and also as a striker, right midfielder, Left midfielder, and center attacking midfielder position throughout his career.  Boateng has played for his national team for four years, earning him 15 senior Caps till date after his debut in 2010. He is very strong in the air and one versus one situation against the goalkeepers. He is famous as an excellent long shot taker and athletic player in Football.

The veteran footballer is also quite active on social media like Facebook, Instagram, and Twitter. He keeps updating the fans about the matches and his announcements. He posts a picture of his vacations in different places, family, and teammates, earning him huge fan followings around the world.