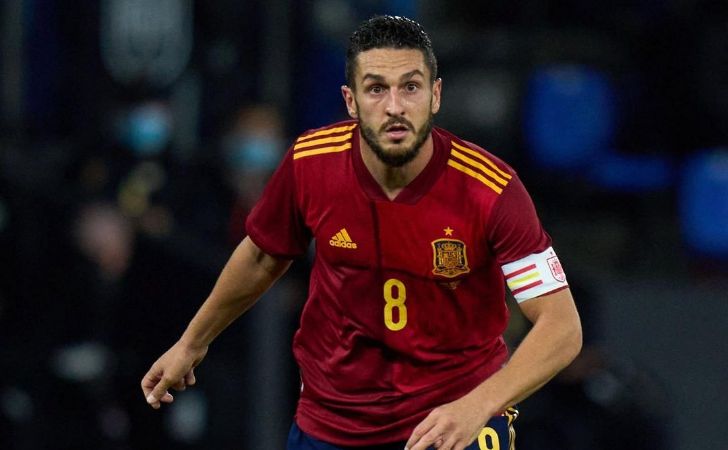 Jorge Resurreccion Merodio is commonly known as Koke in modern football. He is a professional football player who is currently playing for Athletico Madrid. As well as he has also represented from Spain national team in different age stage games.

However, this Spaniard is calm, bold, and brave. Playing in a central midfielder position wearing the captain band for the club is itself a great responsibility. Generally, Koke is a right-footed player who wears jersey number 6 for the club and 8 for the country.

The first thing to remember, this player joined the youth team of the Atletico club when he was 8 years of age. Surprisingly, this athlete graduated from the club in 2008 and made his debut against Barcelona.

The current captain of Atletico Madrid was born on 8 July 1992 in Madrid, Spain. Eugenio Resurreccion and Mrs.Merodia are the father and mother of this athlete.

Koke spend most of his childhood in the place where he was born, Colonia de Los taxistas. This place is also known as the birthplace of another Spanish striker, Alvaro Negredo.

It’s from Koke’s elder brother from where his name “Koke” is introduced. He didn’t grow up alone in the family, it was with two brothers and three sisters. Koke and his elder brother were always close to each other.

This Spaniard is a humble, self-made footballer. His father, Mr.Eugenio used to work at a factory located in Madrid. Similarly, his mother was a housekeeper, looking after Koke and his siblings.

Koke had a special type of talent from his childhood; he made progress in those playing in the local fields of Colonia de Los taxistas. At eight, Koke was recruited to the Atletico Madrid academy.

During that time Koke boost his skills and took him to another level. It was Fernando Torress who was his idol, he grew up watching his games at Atletico Madrid.

Koke was always determined to be a great footballer since childhood. For that, he joined Atletico Madrid’s academy at an early age. Likewise, he graduated from the academy in 2009 and joined the Atletico Madrid senior squad.

We know, how much effort and dedication he has put into becoming the leader and center midfielder of the Diago Simone‘s squad.

Outside of it, there isn’t much information available about his educational background. Playersaga will update the information as soon as it becomes available.

The first thing to know about Koke is he was born on 8 January 1992. By this, he is 30 years old as of 2022. Koke belongs to the Roman Catholic household and is Christian by religion.

At the same time, this Capricorn sign player is ambitious, organized, hardworking, practical, and goal-oriented. Koke is Spanish, as of now holds Spanish nationality. This footballer is 5 feet 9 inches tall, a perfect height to be a footballer.

Leader Koke weight 74 kg which is 163 lbs as of 2022. Likewise, Koke belongs to the Spanish ethnicity and has light brown eye color. The captain of Atletico is seen in simple haircuts on and off the pitch. His hair color is dark brown.

This midfielder is a great fond of Italian food. Furthermore, his sexual orientation is straight. This midfielder is white and equally respects people of every race. Additionally, his shoe size is 10 US, and his dress size is 8 US.

A Capricorn sign player’s chest measurement is 40 inches. Corresponding to this, his biceps and waist sizes are 13 inches and 32 inches respectively. This maestro wears shoe size 8 for casual shoes and wears formal when he has to go outside.

Instead, of having more than 100 shoe collections, this Spaniard keeps buying shoes whenever he goes shopping.

In the midfielder position, Koke is currently playing for the La Liga side Atletico Madrid. This 5 feet 9-inch player is globally known for his ability to make a key pass for his teammates. This Spaniard play wearing jersey number 6 for the club and 8 for the country.

This athlete has an overall rating of 85 in FIFA 2022. In general, this maestro preferred to shoot with his right foot. Based on our database his rating on FIFA 2022 are listed below:

Especially, his stamina, dribbling, ball controlling, and crossing are best out of best stats. Meanwhile, Jumping, finishing, and heading are their weak stats.

Who is Koke wife? Personal Life

According, to Koke, his family and community people are humble. His parents are from a working-class Spanish community. Koke’s father used to work in a factory, whereas his mother was a housekeeper. This athlete wasn’t raised in a rich family. His hard work, and dedication made him rich now.

When it comes to his personal life, Koke is disciplined, responsible, loyal, and has self-control. This Spaniard is the type of man every lady desires to have in their life.

For the first time, they meet at a family function of Koke. Before getting married in 2018, this couple started dating in 2012.

To begin with the fact, for every successful man there is a hand of women. Likewise, Koke and Beatriz Espejel are among the most loved and beautiful couples in football history.

This couple were in a relationship since 2014. Similarly, this beautiful couple is fond of traveling. Whenever Koke gets time, they go for exploring new places. On 15 December they were blessed with a child.

Their son’s name is Leo.

Beatriz’s brother is also a footballer like Koke. In the first place, it’s football that brought them together. Koke’s wife Beatriz was an English teacher in Albany school. Besides this, she is also a model who has millions of followers.

This lady has a great fan base on her social media, as she is a reputed model too. In May 2018, this beautiful couple get married in a highly emotional ceremony.

After crunching the digits, this right-footed midfielder earns 30 euros per minute. To this date, his market value is 34 million euros. Despite having millions of euros, Koke and Beatriz Espejel preferred to live a simple life together.

Meanwhile, Koke also gets $1-$5 million from endorsements every year. Despite that, this Spaniard has seen driving a simple Toyota car. In other words, this maestro contract at Atletico will expire on 30 June 2021.

This one club man has millions of followers on his social media from worldwide. Millions of people have been inspired by his life right now. In 2018 this athlete announced he will be a dad on social media.

Koke began his football journey by joining the Atletico Madrid’s youth team when he was eight. This footballer made his senior debut on 19 September 2009 against FC Barcelona as a substitute in which his team suffered a heavy loss with a scoreline of 5-2.

On 26 February 2011, he scored his first league goal against Sevilla FC with an assist from Diego Forlan. He has been crucial in midfield for Diego Simeone’s Atletico for a long time. He has appeared in 500+ matches and scored 45+ goals in the different competitions for Los colchoneros.

Koke has been performing consistently in A.Madrid’s shirt for 12 years now and during that period, he managed to win La Liga, Europa league twice, and Copa Del Rey once.

Koke has been part of the Spanish senior national team since 2013-till. Before representing the senior team, Koke also played for under-17, under-19, under-21, and under-23 Spanish teams.

As a midfielder, he has already played 62 matches from the Spanish senior side but hasn’t been able to contribute through goals yet. Since they included his in the national team, he has represented Spain in major tournaments, including WorldCup 2014, world cup 2018, and Euro 2020.

In Chamberi ( Capital of Madrid) he was once robbed at a gunpoint. Koke was in his car suddenly an armed robber on a bike came and pointed a gun at him. According, to Koke it was a dangerous situation.

At that point, Koke cooperated with the thief, they stole his watch. It is reported that this stolen watch was worth 77,000 euros.

Follow us and get the latest news delivered to your timeline!
Previous ArticleVinicius Junior: The Rise of the Brazillian, Age, Height, Salary, FIFA 22Next ArticleAnsu Fati: The Rising Star, Age, Salary, Net Worth, FIFA 22