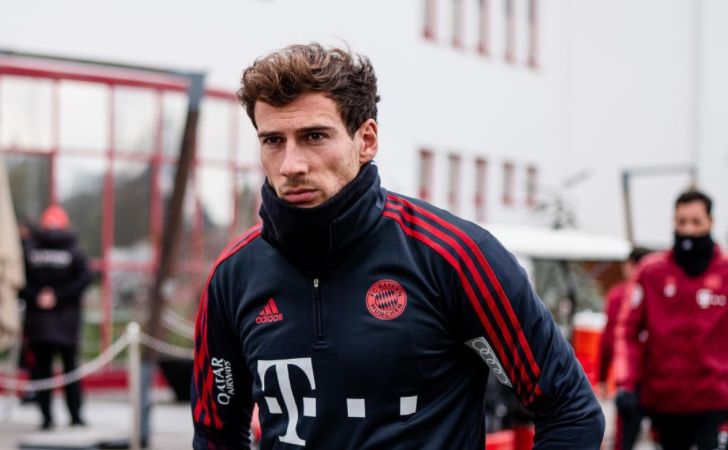 German international Leon Goretzka is one of the most aggressive and physically strong professional footballers in the world. Footballer Leon is one of the best box-box midfielders in world football who currently plays for the German national team and German club FC Bayern Munich. He is also often called scoretzka by his FC Bayern teammates. Leon Goretzka has played for many great football clubs during his career, like FC Bayern Munich and FC Schalke in his football career until now.

Likewise, Leon is a very versatile and skilled player who can play excellently at the midfield position. During his career, Goretzka has played as a central midfielder, a central defensive midfielder, and sometimes as a left midfielder and right midfielder. His full name is Leon Christoph Goretzka, and he was born on 6th February 1995 in Bochum, Germany. Goretzka has been playing for his national team for a long time, earning his 41 Caps to date after his debut in 2014.

He has won many major trophies like the UEFA champions’ league and the UEFA Super Cup in his career. Footballer Leon is widely regarded as one of the finest and skilled midfielders of the game due to his intelligence, shooting skills, and versatility during the game. This biography on football star Leon Goretzka covers some of the important moments from his early life to date.

The UEFA champions’ league winner German international was born to father Mr. Konrad Goretzka, and mother Mrs. Konrad Goretzka. His ancestors migrated to Germany from the Netherlands very long ago. Leon’s father was an engineer by profession, and he used to watch his father while he was working. Leon also has a brother whose name is Philip Goretzka. He grew up playing football with his brother and friends. According to his parents, he would often play in the ground and his backyard with his school friends during his early childhood.

The talented child has soon recruited in the local club Werner SV 06 Bochum ranks, and an early 2013, he joined the German football club FC Schalke before finally moving to FC Bayern Munich, where he achieved immense success. Goretzka played with number 8 on his jersey during his days at Schalke and wore the number 18 at his current club Bayern Munich. Likewise, he used Goretzka as his name in his club as well as his national team kit during his career. Starting as a defensive midfielder in his early career, he excelled at many midfield positions.

Leon Goretzka of Bayern Munich has an overall FIFA 22 rating of 87. The ratings are simply ridiculous, and the German maestro will almost probably be one of the most popular midfielders on FIFA 22. The passing characteristic gets a rating of 86, and dribbling has a grade of 84. These are ideal for midfielders and are superior to other midfielders.

German international Leon Goretzka was born on 6th February 1995, which makes him 26 years old now. He is Catholic by religion, and his Zodiac (horoscope) sign is Aquarius. According to his parents, he was always playing football with the children in their neighborhood. Delighted by his talent, his father took him to the local clubs in Germany, who was soon recruited in the junior team of Werner SV 06 Bochum Colo. Since then, he has been playing at a high level, making him one of the best players in modern football.

Goretzka has an athletic body and, he stands 6.2 inches tall. He does not have any tattoos on his body yet. Leon has evenly matched weight for a professional footballer, as he weighs around 165 pounds (75 kilograms) at normal. This footballer has dark light brown colored eyes and light brown hair. He is very professional and takes very care of his body, training, and diet. He has a chest span of 43 inches and a waist of 34 inches. Likewise, his athletic biceps measure 16 inches. Likewise, he uses a shoe size of 12 (US).

Leon Goretzka salary and Net worth

Also known as “Scoretzka” by his teammates, Goretzka is believed to be worth around $40 million to date. He has played clubs like FC Schalke and Bayern Munich, so a major part of his earnings constitutes Football Club salary and additional bonuses, endorsement, and sponsorship deals. He made 129 appearances for his national team after his debut in 2007.

He has also earned a significant salary playing for his national team. He was signed by German club FC Schalke when he was very young for around 4.5 million, where he earned a whopping signing bonus and salary. After his fine performances each season, he earned a move to Rival German football giants FC Bayern in a free transfer deal. He recently extended his contract with FC Bayern Munich for a period of five years.

At his current FC Bayern Munich, he earns around 9 million dollars annually in salary alone. This amount makes him one of the highly paid midfielders in modern football. Leon Goretzka is also a fashion fan, and he owns multiple extraordinary cars in his collection.

German international Leon is unmarried until now, but he is in a relationship with a woman whom he has known for a long time. Her name is Mathea Fiserr, and she is also a German international. The couple fell in love with each other during his days at FC Schalke.

The couple, however, has kept their personal and relationship life quite personal. They are sometimes seen hanging out together in their pictures on social media. Goretzka is also a gym lover and fashion fan. He has a very muscular and athletic body. He has a huge following on Instagram, Facebook, and Twitter. Being a professional football player, he also spends his significant time in the gym and training. He takes very care of his body, training, and diet, making him one of the remarkable professionals in this sport.

Nicknamed “scoretzka,” Leon Goretzka is one of the best box-to-box midfielders in football. He is an intelligent and versatile football with beautiful trophy collections throughout his career. His unique style and versatility make him one of the best midfielders in football. He has excellent heading, slide tackling, and intercepting skills. He is also very good on aerial duels and one vs. one against the goalkeepers. Leon has several trophies like the German league Bundesliga, UEFA super cup, and UEFA champions’ league in his career playing for the different football clubs.

He has good passing, tackling, and shooting abilities, making him a perfect combination of defense and attack. Goretzka has played as a central midfielder, central attacking midfield, and sometimes as a Left midfielder and Right midfielder in his professional football career. He is famous for his tackling and aggressiveness during the game.

Leon Goretzka is also quite active on social media like Facebook, Instagram, and Twitter. He keeps updating the fans about the matches and his announcements. Likewise, he posts pictures of his vacations in different places, family, and his teammates, earning him huge fan followings around the world. He is one of the funny players with having a good sense of humor.