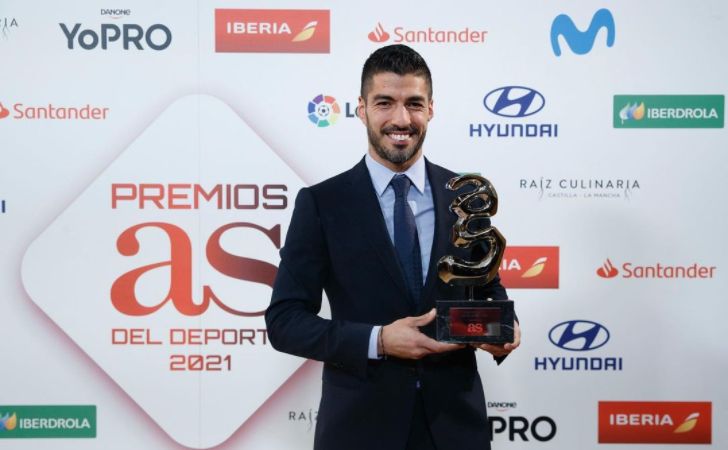 The treble trophies winner Uruguayan international footballer Luis Suarez is one of the most prolific and lethal goal scorers in football who plays as the striker. Football star Suarez plays for Spanish football club Atletico Madrid after his transfer from the rival club FC Barcelona in 2020. In his career, the Copa America trophy winner has also played in many club tournaments with clubs like Liverpool, FC Ajax, and FC Barcelona. The champions’ League winner Atletico Madrid footballer can play at any position in the attack, but his favorite position is a striker or central forward.

He has played for his national football team since 2007, making a total of 129 appearances till date after debuting on the international stage. Luis has won many major trophies in his career, like the Dutch league title, a Spanish league title and UEFA champion’s league title for different football clubs. Footballer Suarez is widely regarded as one of the best strikers of this generation due to his long shooting skills, precise finishing, and ability to head the ball into the net. This biography on Atletico Madrid football star, Luis Suarez covers some of the important moments from his early life.

Uruguayan prolific goal scorer Luis Suarez was born to their father Rodolfo Suarez and mother Sandra Suarez. His parents are also the natives of his birth country Uruguay. Suarez did not have an easy childhood as he was born to a poor family in Salto, Uruguay. His father Rodolfo left his family, leaving his mother to take care of her children. Suarez also has a sister and four brothers as siblings. His brother’s names are Paulo Suarez, Diego Suarez, Maximiliano Suarez and Facundo Suarez, while his only sister’s names are Giovanna Suarez and Leticia Suarez. His elder brother Paolo, was also a professional footballer like Luis but is now retired.

Luis started to fall in love with football from a very young age as he loved playing the game with his friends and brothers. Delighted by his skills and talent, he was asked to join the local Uruguayan football club Artigas de Salto, where he spent only three years with the youth team. Suarez also played for Urreta football club’s youth team when his family migrated from his birthplace. Likewise, Suarez played for Nacional football club’s “B” team, where he was promoted to senior squad after few years. He uses Suarez as his name in his club and his national team jersey in every match.

The Copa America trophy winner Uruguayan footballer Suarez was born on 24-01-1987, making him 35 years old.  He follows Roman Catholic as the religion and his Zodiac (horoscope) sign is Aquarius. Suarez has earned the nickname “El Pistolero and the cannibal” by his fans worldwide. He earned that nickname for his never giving up attitude, and he was very desperate for scoring the goals in every match.

Suarez has an athletic body and he stands 6.0 feet tall. Luis has evenly matched weight for a professional footballer, as he weighs around 179 pounds (81 kilograms) at normal. The Copa America trophy winner Uruguayan footballer has brown eyes and black hair. This hardworking footballer is very professional and takes very care of his body, training, and diet even at 35. Suarez has a chest span of 39 inches and a waist of 33 inches. Likewise, his athletic biceps measure 14 inches and he uses a shoe size of 11 (US).

Luis Suarez Salary and Net Worth

The UEFA champions’ league title winner Uruguayan international footballer Suarez is worth around 70 million dollars to date. He has played for many richest European football clubs like FC Barcelona, Liverpool and FC Ajax in his professional career. Therefore, a major part of his earnings is from Club salary and additional bonuses, endorsement, and sponsorship deals.

Luis Suarez has also earned a significant salary playing for his national football team after making his debut in 2007. The Dutch football club signed Suarez in around 8.5 million dollars deal while still very young. He also played three seasons with one of the richest clubs in the world, Liverpool and six seasons with FC Barcelona. At his present club Atletico Madrid earns around 10 million dollars per season. Luis is one of the highest-paid Atletico Madrid players in the Spanish league.

Who is Luis Suarez Wife?

Luis Suarez is considered one of the best strikers in the history of Uruguayan football. Luis Suarez is very loyal to his wife, Sofia Balbi. This lovely couple fell in love with each other since they were little kids. The lovely couple have ever since been together. They are parents to two sons, Lauti Suarez and Benjamin Suarez.

The couple also have a daughter together, whose name is Delfina Suarez. His sons are 9 and three years old respectively, while his daughter is 12 years old. Being a professional footballer, Suarez maintains his physical body, training, and diet, making him one of the professional players in this sport.

The European golden boot winner footballer, Luis Suarez is regarded as one of the most reliable football goalscorers. His precise finishing ability has helped him score many goals in club games and international tournaments. His ball heading ability, long shot, and technique make him one of the best football strikers. Suarez has an athletic body and taller height and is also very excellent at heading the ball into the net.

Suarez has had many controversies in his professional football career. He was once caught stopping the ball with his hand in an important international game. Suarez was sent off with a red card after the incident. Suarez also paid penalty for his act in the tournament. Likewise, he once bit Italian defender Giorgio Chiellini while the match was on. The referee immediately sent him off and he was again fined and banned from a few international matches.

Luis Suarez is also quite active on social media like Instagram and Twitter. This fooballer keeps updating the fans about the matches, and, his announcements. In addition, he posts pictures of his vacations in different places, family, and his teammates, earning him huge fan followings worldwide. He uploads pictures with his cars, watches and children on social media.