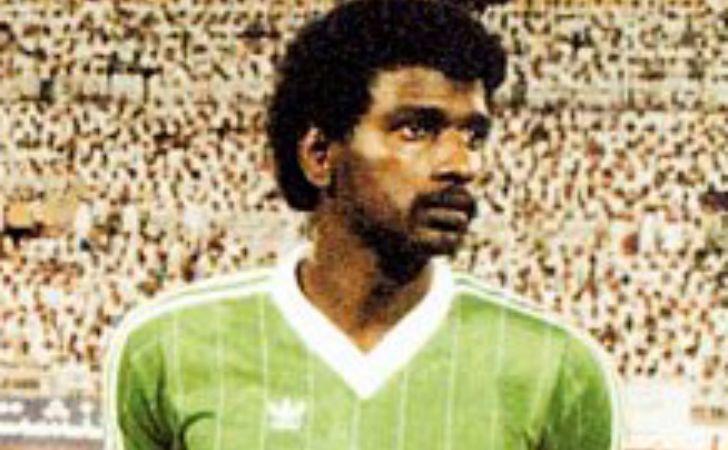 Former Saudi Arabian footballer Majed Abdullah is considered one of the legendary players to ever play for the Saudi Arabia national football team. Majed has played for his national team for more than 17 years after making his debut in 1977. Abdullah is regarded as the “Club legend” by his fans as he spent his whole football career playing for only one football club, Al-Nassr. Footballer Majed was a very skillful footballer at his prime, who played excellently as the winger and mainly as the central forward and striker for his team. He has scored 72 international goals for his national football team until now and assisted his teammates in many matches.

Majed Abdullah is the 14th highest goal scorer in international history. He received awards such as the Arabian Golden Boot winner twice during his playing career. For his significant contribution to Asian football, he is also known as the “Arabic gem.” Due to his accurate shooting, passing skills, leadership qualities, and mobility during the game, Abdullah is largely recognized as one of the finest strikers in the sport. Majed Abdullah, a retired Saudi Arabian football player, has a biography that includes some of the key events in his life.

Former Saudi Arabian international footballer Majed Abdullah was born in a middle-class family in Saudi Arabia called Jeddah. His father, Ahmed Abdullah, was also a former footballer in his playing days. We currently do not have any information about his mother and siblings. We will update the information soon. Abdullah used to play for his school football team where he used to everyone with his first touch, dribbling skills and passes. Initially, he was planning to play in a goalkeeping position, but he was much better at scoring goals. So he began to play as an attacker in the team.

A few years later his father was given a job at the Al-Nassr football club. Majed used to train and play football with his father when he was a kid. This also motivated him to become a professional footballer. Majed played with number 10 on his jersey during his prime playing days at his football club. Likewise, he used Abdullah as his name in his club and his national team kit during his career. Starting his football career as a goalkeeper in his early days, he excelled at many attack positions.

Saudi Arabian premier league title winner Majed Abdullah was born on 11-01-1959, making him 63 years old. Majed follows Islam as the religion and his Zodiac (horoscope) sign is Scorpio. Abdullah also has a brother as a sibling whose name is unavailable. This footballer started playing football in the playground of his hometown with his friends from a very young age. Since then Majed has been playing at a high level, making him one of the greatest football player in the Saudi Arabian national football team.

Abdullah has an athletic body during his playing days and he stands 6.2 feet tall. Majed has evenly matched weight for a professional athlete, as he weighs around 122 pounds (55 kilograms) at normal. He has black color eyes and black colour hair. Saudi Arabian Footballer Majed is very professional and takes very care of his body, training, and diet even at 77. Nicknamed “Arabian Jewel, ” Abdullah uses a shoe size of 11 inches (US).

Majed Abdullah Salary and Net Worth

According to multiple sources, Majed Abdullah is believed to be worth around 2.5 million dollars to date. In his professional football career, the Arabian Golden Boot winner only played for one Saudi Arabian team, Al-Nassr football club. As a result, extra incentives, endorsements, and sponsorship deals obtained during his playing days account for a significant portion of his present net worth.

After making his international debut in 1977, he has made 117 appearances for his national football team, Saudi Arabia. In his heyday, he made a good living as a member of his country’s national team. In the Saudi Arabian football league, he is one of the highest-paid players. We at playersaga do not have any information about his car collection, properties, Investments and other forms of wealth. We will update the information soon.

Who is Majed Abdullah Wife?

Abdullah, the famous Arabian Cup champion, is also considered one of the most iconic Asian strikers, earning him the moniker “Arabian Jewel” from his supporters worldwide. At this time, we don’t know anything about his wife’s career or background.

Similarly, we don’t have any information on his children. We will update the information as soon as possible. Majed has a huge following on his social media account like Facebook and Twitter. Abdullah has an athletic and fit body even at this old age of 63. Being a professional football player, Majed maintains his diet and exercise routine, making him one of the most remarkable people in the country’s sports history.

The two time Arabian golden boot winner, former Saudi Arabian footballer is one of the iconic football players to ever play in the Saudi Arabian premier league. His shooting, crossing and dribbling qualities in his playing days made him one of the best attackers in the league in his old football playing days. In his prime time, he was unstoppable as he had a brilliant first touch and good football skills.

The Arabian Cup winner was also very famous for his excellence at the one vs one situation against opposition defenders and the goalkeeper. He has won several individual honors and major trophies at that time like the Saudi Arabian premier league title and the Arabian golden boot in his professional football career. Legendary Asian footballer Abdullah has played mostly as a central forward, striker, and sometimes as the winger in his professional football career.

According to our research, we could not find any Facebook and Instagram accounts owned by the former Saudi Arabian international footballer. But, he uses a Twitter account and has a huge following on his Twitter account. Majed keeps updating the fans about the matches, and, his announcements. This footballer posts pictures of his vacations in different places and his family members earning him huge fan followings worldwide.

Abdullah, a famous Asian footballer, is a retired professional footballer. He does not have a FIFA 22 player rating since he is no longer a member of any club or nation. In the future, FIFA may issue a premier icon card for the renowned footballer. Legendary footballers like Diego Maradona, Cristiano Ronaldo, and Pele have top icon cards in the FIFA 22 game. However, it is unclear if FIFA would issue a FIFA card to the former Saudi Arabian footballer.