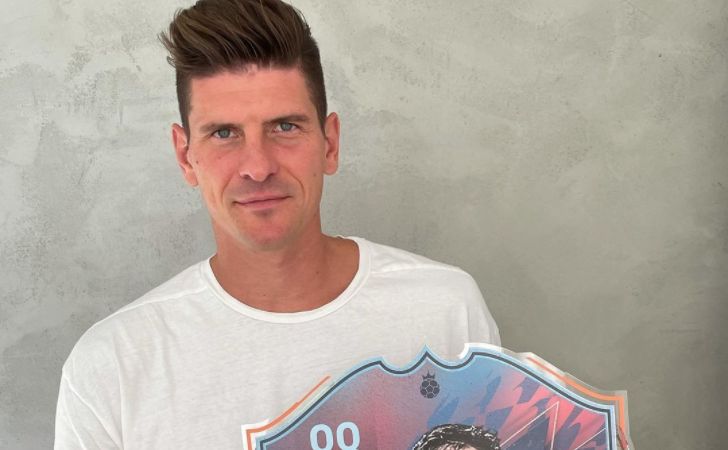 German poacher striker Mario Gomez is one of the best football forwards. He was in the squad of FC Bayern Munich that won the treble back in 2013. Gomez played with Franck Ribery, Arjen Robben, and Philip Lahm when he won the treble with the German club. He played for many elite European football clubs in his football careers like VFB Stuttgart, Fiorentina and FC Bayern Munich. He can play excellently as a central forward but mainly as the striker when talking about his overall playing position. Gomez has played for his national football team for a long time after making his international football debut in 2007.

Footballer Gomez has won many major trophies like the German league title, Turkish league title and the German Cup playing for different European football clubs. The Champions’ league winner’s former German strike is widely regarded as one of the finest attackers in this sport due to his shooting, finishing, and heading skills. This biography on Former German striker Mario Gomez covers important moments from his early life till date.

German international Gomez was born to their father, Jose Gomez Garcia and mother, Christel Roth. His father was originally from Spain while his mother was from Germany. Gomez was born in a middle-class family in Germany called Riedlingen. We do not have any information about his siblings and their age. We will update the information soon. Showing good signs early, Gomez grew up playing football with his friends. Even though he was not interested in football earlier, he later found a love for this sport.

He was asked to join the VFB Stuttgart football club in his school days. However, he did not accept the offer to stay with his friends and family in his hometown. However, his local German football team was once defeated in a tournament with VFB Stuttgart. So he joined the club to develop his skills and earn his place in the group. He played with number 33 on his jersey during his early playing days at VFB Stuttgart, who also wore the same number 33 at FC Bayern Munich. Likewise, he used Gomez as his name in his club and his national team kit in his football career.

German league title winner Mario Gomez was born on 10-07-1985, making him 36 years old. (As per 2021) He follows Christianity as the religion, and his Zodiac (horoscope) sign is Cancer. Gomez is also nicknamed “Super Mario” by his fans worldwide. The German attacker has kept his hair short in his professional football career. In his prime, Gomez was a proper-footed striker with brilliant shooting and finishing skills. Gomez has an athletic body and he stands 6.2 feet tall.

Footballer Gomez has evenly matched weight for a professional footballer, as he weighs around 196 pounds (89 kilograms) on average. He has blue color eyes and brown color hair. The Turkish league top scorer former German international footballer is very professional and takes very care of his training and diet even after retirement. We do not have any information about his siblings and their age. We will update the information soon. Mario Gomez uses a shoe size of 13 (US).

Mario Gomez Salary and Net Worth

According to multiple sources, Mario Gomez is worth around 10 million dollars to date. (As of 2022) Footballer has played for many elite European football clubs in his football careers like VFB Stuttgart, Fiorentina and FC Bayern Munich. So a significant part of his earnings constitutes football club salary, additional bonuses, endorsement, and sponsorship deals. He has made 78 appearances for his national football team after his debut in 2007. Footballer Gomez has also earned a significant salary playing for his national team.

Who is Mario Gomez Wife ?

The former German player of the year award-winner striker is an authentic Christian. He is married to his girlfriend, whom he has dated for a long time. Her name is Sabrina Carina Wanzung. The couple fell in love while the German footballer was still playing for Bayern Munich.

Likewise, he was previously in a relationship with his childhood girlfriend, Silvia Michel. But the couple decided to break up after it did not work out for them in the past. We do not have any information about his children and their age. We will update the information soon. He has a massive following on Instagram, Facebook, and Twitter. Being a former professional football player, he spends his significant time in the gym and training.

The former German league top scorer Mario Gomez is considered one of the excellent finishers and poacher strikers in football. His finishing qualities and ball heading ability made him one of the best attackers in his prime playing days. His teammates used to feed the ball through crosses and passes, which he used to head into the back of the net.

The former German player of the year award winner striker has won several trophies like the German league title and UEFA champions’ league title playing for Bayern Munich. He has played mainly as a striker and sometimes a central forward in his professional football career. Gomez was using jersey number 33 for his club and the national team while still playing. Likewise, he used number 27 on his jersey in his last three seasons with VFB Stuttgart football club.

Mario Gomez is also quite active on social media like Instagram and Twitter. Footballer Mario keeps updating the fans about the matches, and, his announcements. Gomez posts pictures of his vacations in different places, family, and his teammates earning him huge fan followings worldwide. Mario uploads pictures with his cars, watches and children on social media.

Mario Gomez is a retired professional footballer. Footballer Gomez does not have a player rating in FIFA 22 as he is not playing for any club or the country anymore. The German former striker, however has-icon FIFA cards in FIFA 22 game. He is given 88 overall rating and striker as his preferred position in FIFA 22 prime icon card.