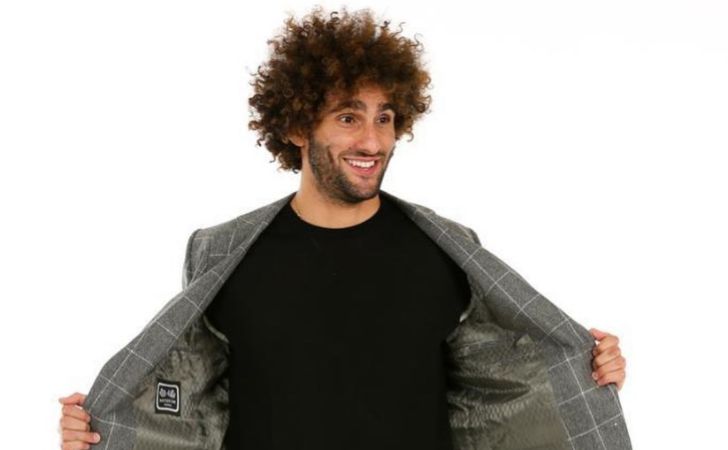 Marouane Fellaini is a Belgian professional football player and is currently a midfielder for the Chinese club Shangdong Luneng Taishan. He used to play for the Belgian national team, but after the 2018 World Cup, he announced his retirement from international football. Fellaini is limited in terms of skills, but he has good aerial presence, exquisite chest control, and has a height advantage over other players.

In 2008, he was awarded Ebony Shoe for being the best African or African origin player in the Belgian Pro Leauge. On 1 February 2019, Fellaini was signed by the Chinese club, Shangdong Luneng Taishan, and is currently playing with the team.

Marouane Fellaini was born on 22 November 1987 in Etterbeek, central Belgium. His father, Abdellatif Fellaini, was a former footballer, while his mother, Hafida Fellaini’s profession, is unknown. His parents were Moroccan migrants from the country’s Tangier city.

Fellaini’s parents migrated to Belgium to have better living. Footballer Fellaini has an identical twin brother, Mansour Fellaini. His father was a professional goalkeeper and that’s where Fellaini got the love for football.

In childhood, he loved running more than football. Footballer Fellaini used to participate in 10,000m races. While his friends went to their school by bus and cars, he used to run to his school. Fellaini father played an important role in his childhood as his father would always guide him in football.

At 8, Fellaini joined Anderlecht Academy with his father’s help. In the first two seasons of the club he scored 63 goals. After two years in the Anderlecht Academy, Marouane joined Mons at 10 years old. Fellaini signed his first professional contract at 17 with Standard Liege.

There is no information about his school background accessible and other basic information as he keeps them private.

Marouane Fellaini Fellaini is 34 years old as of 2021 as he was born in 1987. He is a citizen of Belgium and is of Moroccan Berber ethnicity.

Fellaini stands 6 feet 4 inches (194 cm) tall and is a physically strong player. With that much of their height he weighs around 80kg.

His eyes are black, and had an afro hairstyle for the longest time but recently had a haircut. Fellaini’s chest measurement is 38 inches. Similarly, Fellaini waist is 32 inches and his biceps are 14 inches.

Fellaini’s personal life has some unknown secrets as he is a private kind of guy. No one knows whether he is or was married as well as his children’s information are unknown too.

Although the secrecy, there were some reports of him dating Belgian model, Lara Binet for two years. Jeffers Roxanne and Viktoriya Bonya were also his girlfriends in the past.

This footballer is a hardworking and passionate individual hungry for success and was always the same from his childhood.

Marouane Fellaini Salary and Net Worth

Fellaini signed a contract with Chinese club Shangdong Luneng Taishan on 1 February, 2019, for a cost of £10.5m

Fellaini’s Net Worth is $14 million as of 2021. Similarly, his overall salary and net worth are from playing football.

Was Fellaini good or bad at football?

Good and bad are two words that have always been associated with Fellaini. He is tall and has less speed but was usually the top player to cover most distance in a game. His skills may be limited, but he had his way which many managers loved about him. He has an impressive chest control which is satisfying to watch.

Once, David Moyes said he had the best chest controlling skill ever. Not only chest game, but his aerial performance is also phenomenal as well.

Fellaini might not be the best player to watch, but he can get into opponents nerves, forcing them to make mistakes and help his team create game-winning situations.

Technical skills may not always lead you to your expected result. Sometimes, a team requires a player who can score a simple header and win. This is exactly what Fellaini did in Everton and Manchester United. Being frustratingly tall for his opponents and with amazing chest control with aerial goals, he was plan B for many managers in his career. Many managers loved him under them as he was an element of surprise that nobody expects and does his job effectively.