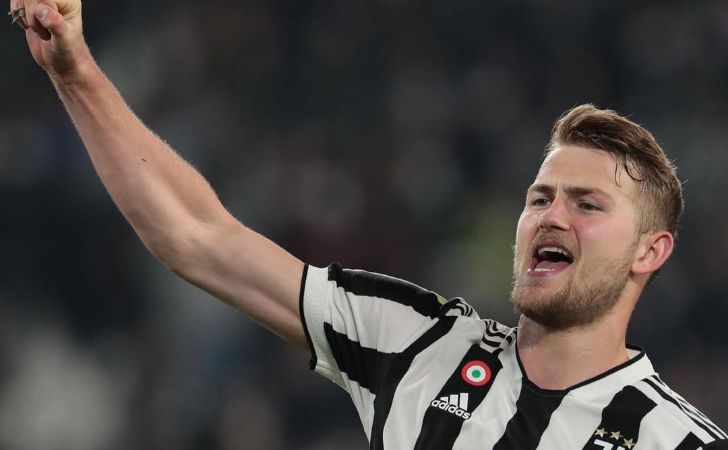 To begin with, Matthijs de Ligt is a Dutch professional football player. However, he currently plays for Serie A club Juventus and represents the Netherlands national team.

Further, De Ligt is one of the most skilled defenders amongst the current generation of footballers, and he plays as a Centre-Back for both teams.

Nevertheless, with his great physique, incredible tackling, passing technique, and aerial duels, Matthijs is unquestionably the best young challenger in the race for the world’s top defender.

Moving further, the Dutch Centre-Back, De Ligt was brought to this world on 12th August, 1999 in Leiderdorp, Netherlands. Thus, he is currently 22 years old.

Further, De Ligt was born to his father, Frank de Ligt, and mother, Vivian de Ligt. However, he grew up with his younger brother, Wouter de Ligt, and his sister, Fleur de Ligt.

Furthermore, Matthijs began playing tennis at five and excelled at it. Following that, he was exposed to football by a friend, who took him to a training session. Matthijs began to play football shortly after training.

This was the period when he successfully enrolled on the squad of his neighborhood club FC Abcoude, which provided him with the opportunity to display his talent.

Starting, this Dutch center-back has a fantastic physique. In terms of height, he stands at 6 feet 2 inches tall. Matthijs weighs approximately 89 kg or 196 lbs.

Similarly, De Ligt has an athletic physical appearance. Likewise, his hair is blonde, and his eyes are blue.

However, De Ligt ’s zodiac Sign is Leo, who is creative and hardworking. A Leo man is ambitious, has big plans for his future, and goes after what he wants with confidence and determination. Additionally, De Ligt seems to be of Dutch nationality.

Later, De Ligt decided to join AFC Ajax’s youth team at the age of nine and stayed with them for eight years until 2016. However, he was selected to play for Jong Ajax’s senior squad for the 2016/17 season due to his strong performance for the youth team.

However, on 8th August, 2016, he made his debut for Jong Ajax in an Eerste Divisie match against FC Emmen, playing the entire game.

Further, De Ligt made his senior Ajax debut against Willem II in a cup match on 21st September, in which he scored from a corner, making him the second-youngest goal scorer in history, after only Clarence Seedorf.

Later, Ajax officially announced De Ligt’s promotion to the senior squad through Twitter on 24th October. After that, the defender rapidly established himself in the first squad, appearing in 11 league games and nine in the Europa League.

Likewise, when he started against Manchester United in the 2017 UEFA Europa League Final on May 24, de Ligt became the youngest player to appear in a major European final.

Further, in August 2017, De Ligt was promoted to the first team after the departure of Davinson Sánchez to Tottenham Hotspur. Subsequently, in March 2018, he was named Ajax’s youngest captain following the injury of club captain Joel Veltman.

Afterward, De Ligt received the Golden Boy award on 17th December, 2018, becoming the first defender to do so.

Eventually, De Ligt scored the game-winning goal in the Champions League quarter-final against Juventus on 16th April, 2019, propelling Ajax to the competition’s semi-finals for the first time since 1996/97. Lastly, his goal also made him the youngest Dutch player to score in the knockout stages and the second-youngest defender to score after Jol Matip.

Moving further, De Ligt signed a five-year contract with Serie A winners Juventus on 18th July, 2019, for a fee of €75 million, to be paid in five annual installments, with additional fees of €10.5 million.

On August 31, he made his official debut for the club in a 4-3 decisive win over Napoli in Serie A.

Later, in the Derby Della Mole on 3rd November, de Ligt scored his first goal for the club in a 1-0 victory over Torino.

Moving further, before making his senior international debut, Matthijs De Ligt also had represented the Netherlands in under-15, under-16, under-17, and under-19 championships.

However, the defender made his first appearance for the Dutch national team on 25th March, 2017, in a 2–0 loss to Bulgaria in a 2018 FIFA World Cup qualifiers.

Eventually, De Ligt started and played 90 minutes in all four UEFA Nations League group matches against Germany and France as the Netherlands won the group stages and qualified for the Nations League Finals.

Later, on 5th June, he scored a great goal against England to help his team go to the final, where the Netherlands were defeated 0–1 by Portugal.

On 27th June, 2021, he was sent off for misconduct against the Czech Republic in the UEFA Euro 2020 round of 16, during which the Netherlands conceded two goals and were excluded from the tournament.

Currently, Matthijs de Ligt is unmarried. However, De Ligt is currently dating his long-term girlfriend and a successful model, Annekee Molenaar. Following that, Annekee Molenaar has over 439K Instagram followers and frequently uploads photos of her recent escapades with De Ligt.

Additionally, De Ligt and Annekee Molenaar are a happy couple. However, they appear to be too young to have children, but they have two dogs, Cara Luna, and Bella, who they consider family members.

However, about Matthijs de Ligt sexual orientation, he is straight.

Moving further, his ability to get the possession back inside the eighteen-yard box while making brief interactions with the rival striker demonstrates De Ligt’s tackling skills and is a perfect illustration of a clean tackle within the area.

Furthermore, De Ligt’s aerial skill is another area where he shines. He averages three defensive aerial duels each game while offering a significant danger on offensive set-pieces.

Additionally, This skill is essential for young players and helps prepare De Ligt for the transition to a major European league.

Moving Further, Matthijs de Ligt has a FIFA 22 overall rating of 85. Meanwhile, his potential rating is 89, and his best position on the field is CB (Centre-Back).

What is the Net Worth of Matthijs de Ligt?

As of 2022, the Dutch Centre-Back reached an agreement with Juventus on a contract worth approximately 14 million euros (12.5 million pounds) per year.

As a result, The Dutch international’s weekly wage stands at £280,000, with many add-ons enabling him to earn more in bonuses. However, his current contract expires on 30th June, 2024.

The Dutch international de Ligt plays as a Centre-Back for Serie A club Juventus.

Matthijs de Ligt is currently unmarried, however, he is dating Annekee Molenaar.