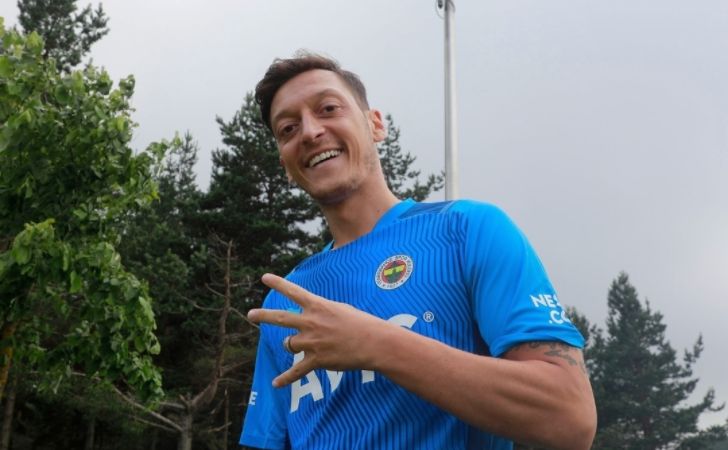 He has won German Player of the Year for five years. Due to his phenomenal performance in the 2010 FIFA World Cup, he was targeted by many prominent European clubs. During the peak time of Mesut’s career, he was considered one of the best midfielders.

On 27 January 2012, Ozil joined the Turkish club Fenerbahçe on the three-and-half-year deal as a free agent with a reported yearly salary of £4.5 million.

Footballer Mesut Ozil was born on 15 October 1988 in Gelsenkirchen, a city in western Germany. His father, Mustafa Ozil, was a metal worker, while Gulizar Ozil, was a housewife. Mesut parents were poor as they worked in poor paying jobs. His parents were Turkish, but migrated to Germany to seek better life and provide a better future for their kids.

He joined the preschool where most of Turkish immigrants were joined. Later he joined Gesamtschule Berger Feld.

Ozil started playing football from an early age. He used to watch his older brother dribble and was fascinated by it. He started playing football in his primary school. Similarly, Ozil further polished his football skills by playing with a local football pitch known as the Monkey cage in his neighborhood. In 2005, Ozil moved to the youth system of Schalke 04. He soon was enlisted in the senior team of Schalke 04.

Mesut’s eyes are light brown and have black hair. Ozil’s chest measurement is 41 inches. Similarly, his waist is 33 inches and his biceps are 14 inches.

Who is Mesut Ozil Wife?

In 2013, he started dating singer Mandy Capristo. However, the relationship ended in 2014 when reports of him dating other women circulated in the media. Two years later, Ozil and Capristo were seen together at the Bambi awards ceremony in Berlin. However, they again broke up in 2017.

Later on, he started dating former Miss Turkey, Amine Gülşe, and got married in 2019 with their first child, Eda, born in March 2020.

Footballer Mesut Ozil is Turkish-German. Turkish was the first language Ozil learned. He also attended a preschool populated with students of Turkish immigrants.

Ozil is Muslim; he practices Muslim religion when he gets a chance. But due to his football career, he has to maintain diet to be energetic as some Muslim festivals involve fasting.

Ozil is incredibly generous. He donated prize money of $329,000 after winning the World Cup in 2014. He also donated to the BigShoe project and financed surgeries for 23 children in Brazil. After Ozil’s wedding, he and his wife donated to 16 camps in Turkey and Syria. These are only some of the charity work he has been involved in; there are many such charities he has donated.

Mesut Ozil Salary and Net Worth

Footballer Mesut Ozil signed a contract with Turkish club Fenerbahçe on 27 January 2021, as a free agent.

Ozil’s net worth is $120 million as of 2021. His overall salary and net worth are from playing football, sponsorships and endorsements.

Footballer Ozil announced his retirement from international football after the 2018 FIFA World Cup due to discrimination and disrespect from the German Football Association (DFB) and the German Media.