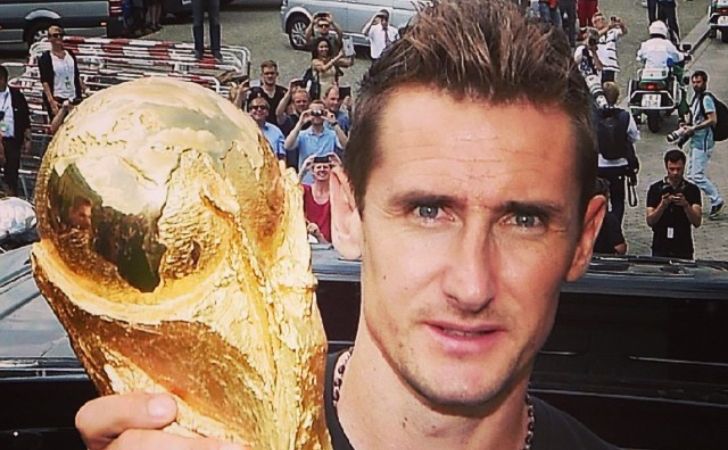 Well renowned with the nickname” Salto-Klose,” Miroslav Klose is a legendary striker in German football history. He is one of this generation’s best striker German strikers and holds the record of most goals scored for his national team. In his career, the world Cup winner has played for different European football clubs like Werder Bremen, Lazio, and FC Bayern Munich. Klose was a lethal finisher inside the box in his prime playing days.

Miroslav Klose also broke Brazilian footballer Ronaldo’s record when he surpassed his record of 15 goals in FIFA World Cup tournament back in 2014 world cup. He has played for his national team Germany for a long time, earning his 137 Caps till date after making his international football debut in 2001. Apart from winning the World Cup in Brazil, Klose has also ended up becoming a runner-up in the FIFA world cup and the European championship previously. Klose is widely regarded as one of the greatest strikers of this generation due to his heading ability, shooting skills, and precise finishing during the game. This biography on German football star, Miroslav Klose covers some of the important moments from his early life till date.

The legendary German striker Miroslav Klose was born to their father Josef Klose and mother, Barbara Jez. His father and mother were Polish internationals before they left for Germany with their kids. Miroslav Klose’s father was also a professional footballer in his playing days. His parents were athletes themselves, which motivated Klose to become a professional footballer. He also has one sister whose name is Macena Klose. When he left Poland at a very young age with his father, Klose found passion in this sport and started training and playing football.

Klose was soon recruited in the ranks of the local German football club FC Homburg. In 1999, he joined FC Kaiserslautern, where he earned promotion to the senior side a few months later. He played with number 11 on his jersey during his playing days at Lazio who wore number 18 while playing for FC Bayern Munich. Likewise, he used Klose as his name in his club and his national team kit during his playing career. Starting as a striker in his early playing days, Klose has established himself as one of the iconic players in this sport.

The world cup winner German footballer was born on 09-06-1978, making him 43 years old.  He follows Roman Catholic as the religion and his Zodiac (horoscope) sign is Gemini. Former FC Bayern Munich star Miroslav Klose is also famous for fair play in the football match. Klose’s father was also a footballer in his playing days so Klose was very motivated to become a professional footballer. Since then he has been playing at a high level, making him one of the best players in modern football.

Klose has an athletic body and he stands 6.0 feet tall. Footballer Klose has evenly matched weight for a professional footballer, as he weighs around 178 pounds (81 kilograms) at normal. He has dark brown color eyes and dark brown color hair. Similarly, Miroslav is very professional and takes very care of his body, training, and diet even at 43. We currently do not have any information about his body measurement. We will update the information very soon. German ex-footballer Klose uses a shoe size of 12 (US).

Miroslav Klose Salary and Net Worth

According to multiple resources, Miroslav Klose is worth around 30 million dollars to date. Klose has played different clubs like Lazio and FC Bayern Munich, so a major part of his earnings constitutes salary and performance bonuses, endorsement, and sponsorship deals in his playing days. Miroslav has made 137 appearances for his national team Germany after his debut in 2001. He has also earned a significant salary playing for his national team.

He was signed by German football club Werder Bremen in 6 million dollar deal, where he earned a signing bonus and salary according to his contract. Likewise, he was again signed by German football giants Bayern Munich Hotspurs where he played brilliantly for four seasons. He also managed FC Bayern senior squad as an assistant manager to Hansi Flick for a season. He also owns multiple extraordinary cars in his collection, such as Mercedes and Audi.

Who is Miroslav Klose Wife?

Miroslav Klose is married to a beautiful woman he had known for a long time. Her name is Sylwia Klose and she was also born in Poland. The couple got married back in 2004 and have been inseparable ever since. During his Werder Bremen football club playing days, the couple fell in love with each other. The beautiful couple are parents to two sons named Noah Klose and Luan Klose.

He also has a huge following on his social media accounts like Instagram, Facebook, and Twitter. He takes very care of his body, training, and diet at this age, making him one of the remarkable professionals in football.

German legendary striker Miroslav Klose is one of the best finishers in this sport has ever seen. He is an intelligent and versatile footballer having beautiful trophy collections throughout his career. His finishing, shooting skills, and ball heading ability make him one of the best football strikers. He can play excellently as the central forward and the striker according to the team’s needs.

Klose has excellent shooting skills from the inside and outside the box. Klose’s well-renowned finishing ability has helped him score many goals in the international and club tournaments. He is also very good in one vs one situations against the opposition defenders and the goalkeepers. In his professional football career, German footballer Klose has played mostly as the striker and central forward, and sometimes as a winger.

Miroslav Klose is a retired professional footballer and former assistant manager at FC Bayern Munich. He does not have a player rating in FIFA 22 as he is not playing for any club or the country anymore. Klose, however, has-icon FIFA cards in FIFA 22 game. He has 89 overall ratings and strikers in his FIFA 22 prime icon card as his preferred position. As a striker, he has been given the highest pace and shot out of other attributes.