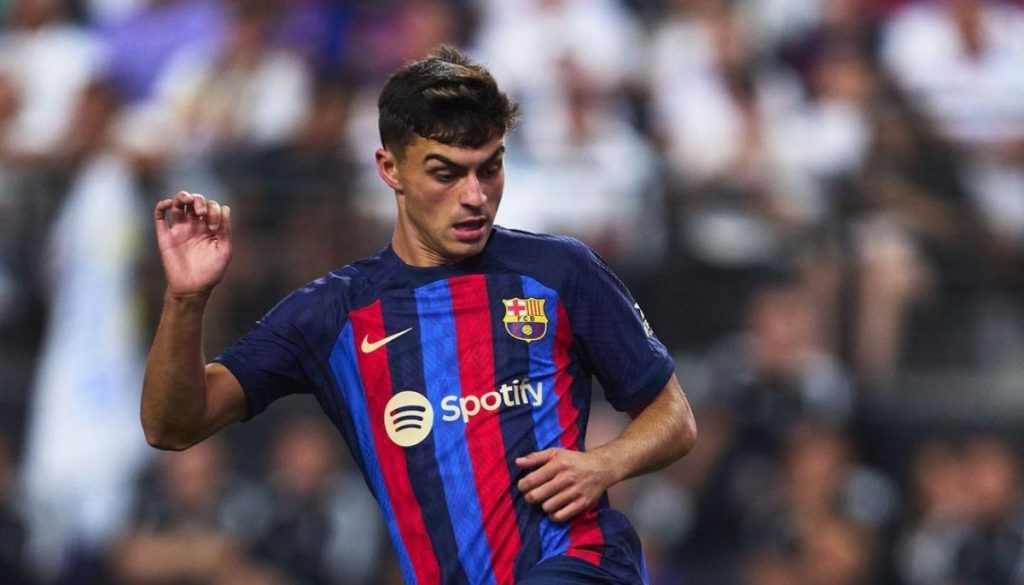 Pedro Gonzalez, often called “Pedri,” is one of the most promising footballers currently playing for F.C. Barcelona and the Spanish national team.

The Spanish teenage midfielder has become one of the very crucial members of his team at a very early age. Pedri is an excellent attacking midfielder; however, he is equally capable of playing as a central midfielder and winger.

He was signed at a minimum fee by the Spanish club, and recently they gave him a new contract with a 1 billion dollar release clause inserted.

At Barcelona, Pedri plays with world-class young footballers like Ansu Fati, Gavi, and Eric Garcia. He is a creative player who can dribble past defenders and shoot from a long distance.

He got a chance to make his international football debut with the Spanish national football team in 2021. Pedri is also considered a replacement for Andreas Iniesta, as his playing style resembles him.

Pedri is widely regarded as one of the finest attackers due to his creative passes, flashy dribbling, and long shooting skills. This biography on football star Ansu Fati covers some of the important moments from his early life to date.

Spanish generational football talent Pedro Gonzalez was born to his father, Fernando Gonzalez, and mother, Mario Rosario. He was born in Tegueste, Spain.

His parents are originally from Spain, and they also own a bar. His parents raised him well alongside his brother, Fernando Gonzalez junior.

Showing good signs early, Pedri grew up playing football with his brother and friends. The youngster is very close to his brother and spends significant time with his family. His family had been Barcelona supporters since the very beginning.

Pedri grew up watching Andreas Iniesta games, whom he idolized a lot. Pedri was initially recruited to play with the youth football team of the Juventud Laguna. He played with the junior team for three years.

Later, he was signed by U.D. Las Palmas for their youth team, where he made the record of youngest goal scorer in the Spanish club’s history.

He spent only one year with the reserve (youth) team. Likewise, the Spanish teenager uses Pedri in his club and national football team jersey.

The Kopa Trophy winner Spanish football talent, Pedri, was born on 25th November 2002, making him 19 years old. Likewise, he follows Christianity as his religion, and his Zodiac (horoscope) sign is Sagittarius. He usually keeps short hair and has a fair skin color.

In addition, Pedri is regarded as one of this generation’s most promising young footballers. The young Spanish midfielder is a right-footed player with excellent passing and dribbling skills.

Similarly, Pedri has a medium-sized body and stands around 5 feet 9 inches tall. He has evenly matched weight for a professional footballer, as he weighs about 132 pounds (59 kilograms) at normal. Similarly, Pedrihas dark brown color eyes and black color hair.

Pedro Gonzalez is very professional at a young age and takes very care of his physical body and diet. Though we have information on weight and height, we do not have any information about his body measurement and shoe size.

Spanish young midfielder Pedri net worth is €9 million to date. Most of his net worth is from playing professional football. He has played for F.C. Barcelona and U.D. Las Palmas until now.

Thus, a significant part of his income is due to salary, performance bonuses, endorsement, and sponsorship deals.

After his debut, he also made substantial earnings playing Spanish national football. He earns around €180,385 per week (€9 million per year) per season at his current club F.C. Barcelona.

After his brilliant form with F.C. Barcelona, he signed a mega-contract with a staggering €1 billion release clause in October 2021.

He also earns performance and goal bonuses from his football club. Pedri is also a brand ambassador for giant clothing company Adidas.

This salary and amount makes Pedri one of Europe’s highest-paid young football players. Pedri is also proud of many fine cars in his collection, but he can’t drive yet as he does not have a driving license.

The Golder Boy award winner Spanish generation is young and growing. As of 2022, he is single and is not dating anyone.

At this quite young age, he takes very care of his training and physical body, making him one of the remarkable young professionals in this sport.

Spanish teen football-star Pedri is a creative young player with brilliant passing skills. His versatility and flashy dribbling qualities make him one of the best young midfielders in football.

His excellent dribbling and long passing skills are compared with the former Barcelona midfielders Xavi and Iniesta. Even though Pedri is a right-footed player, he can shoot and pass very well with his weaker left foot.

His pace and dribbling simultaneously make it hard for the opposition defenders to stop him. He has played mainly in the central-midfield and central attacking midfield positions.

However, he is also comfortable playing in the wing position. Pedri is regarded as one of the young promising midfielders in football.

The young Spanish midfielder has missed many matches due to injuries. Pedri suffered a hamstring injury at the start of 2022, which made him miss 19 matches for his team.

He was also infected with Covid-19, which made him miss two matches. However, Pedri got recovered from the coronavirus in quick time.

Spanish teen football-star Pedri has an overall rating of 84 in FIFA 22 game. Being a central-midfielder, he has the highest passing and dribbling out of other attributes. Likewise, his true potential in FIFA is 92.

He has the highest 84 rating for dribbling and the lowest, 29 for defense. Pedri’s FIFA 22 rating for different attributes is as follows:

His market value has increased due to his brilliant form for Barcelona and his national football team. Pedri has signed a contract with a 1 billion release clause attached to it. According to Transfermarkt, its current market value is 80 million Euros.

Pedri was born in Tegueste, Spain.