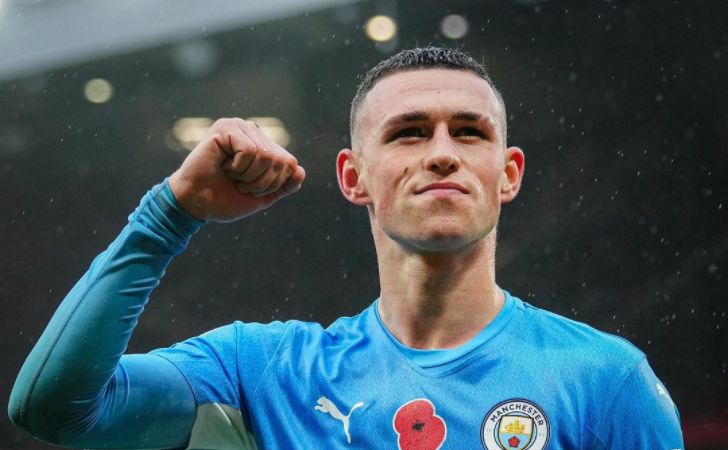 English football star Phil Foden, also called “Ronnie” by his boyhood teammates, is one of the most talented young footballers who currently plays for the Manchester City football club. At just the age of 21, Foden has become one of the very crucial parts of the team. He is one of the very skilled and talented football players who play very excellently at an early age.

Although he can play as the central forward and winger, Foden is an excellent attacking midfielder (his natural position). He has even registered many club records playing for Manchester City’s junior and senior squad.

Phil is widely regarded as one of the finest attackers of the game due to his vision, dribbling skills, and shooting during the match. This biography on generational football star Phil Foden covers critical moments from his early life to date.

Sometimes nicknamed “Stockport Iniesta,” Phil Foden was born to Phil Foden senior and Claire Foden. His parents are from England, and they have been Manchester City fans for a long time. Foden also has one sister whose name is not available when writing this article. Foden and his sister watched the match on television when Manchester City played. Showing good signs early, Phil grew up playing football with his friends in the suburbs of Stockport, England.  Delighted by his son’s skill, his father enrolled him in Manchester City’s academy, where he was quickly promoted to the senior squad in 2016. Since then, he has been playing excellently, making him one of the talented young players in football.

Being a Manchester City fan from his early childhood, he joined the Manchester City academy at just the age of four. He played with the club’s “B” team until he was promoted to the senior squad in 2016. Phil Foden wears the number 47 on his club jersey and number 20 on his national team England jersey. Likewise, he uses Foden’s name in his club and national football team kit. Starting as a midfielder in his early days, he excelled at many midfield and attack positions.

He has a slim body. He also spends his significant time in the gym and training. At this relatively young age, he takes very care of his body, exercise, and diet, making him one of the promising young professionals in this sport.

Foden has a slim build and is around 5 feet 7 inches tall. He has an average weight of 154 pounds (70 kilograms), which is typical for a professional player. Footballer Foden’s eyes are brown, and his hair is Hazel. Foden is a consummate professional who takes excellent care of his body, training, and food. He has a 38-inch chest breadth and a 31-inch waist. Similarly, his muscular biceps are 10 inches long. Similarly, he wears a size nine shoe (US).

Phil Foden Salary and net worth

As per multiple reports, Phil Foden is believed to be worth around $3 million to date. (As per 2022) After being promoted from its football academy, he has played only for Manchester City, so a significant part of his income constitutes football Club salary, performance bonuses, endorsement, and sponsorship deals. He also makes substantial earnings playing for his national team England after his debut in 2020. Foden’s current club city is one of the wealthiest football clubs in the world.

At his present club, he earns (Around 150k Euro per week) approximately 2 million dollars per season. He also earns from performance and goal bonus from his football club. This amount makes him one of the highest-paid young players in European football. He is also proud of many fine cars in his collection, like the Mercedes Benz.

Who is Phil Foden Wife?

He is still unmarried, but he is in a relationship with his childhood girlfriend, Rebecca Cooke. The beautiful couple is also parents to a son whose name is Ronnie Foden.

Foden became a father when he was just eighteen years old. Apart from football, he spends his time with his parents and girlfriend.

English teen football star Foden is a skilled and visionary player with excellent shooting and passing skills. His vision, long passing, and dribbling qualities make him one of the best young footballers. Foden is a left-footed player, although he can dribble and shoot very well with his right foot too. According to his club coach Pep Guardiola, he can play well at the left forward, attacking midfield, and center forward position. His speed and quick dribbling simultaneously make it very hard for the defenders and the goalkeepers to stop him.

He has played primarily on the wing and attacking midfield position and sometimes as a striker in his professional football career with Manchester City. Foden is renowned as a brilliant dribbler and one of the complete young attacking players in football.

Phil Foden is also quite active on social media like Instagram and Twitter. He keeps updating the fans about the matches and his announcements. He uploads pictures of his cars, watches, and children on social media.

English young football-star Foden has an overall rating of 84 in FIFA 22 game. His rating has increased than that of the previous FIFA 21 version.

Foden is a skilled player who can dribble past many defenders and beat the opposition goalkeeper. He has played 13 times under English jersey until now, and he has scored two goals in return after making his debut in 2020. Foden has filled the void left by departing Manchester City legend Sergio Aguero after leaving for FC Barcelona.