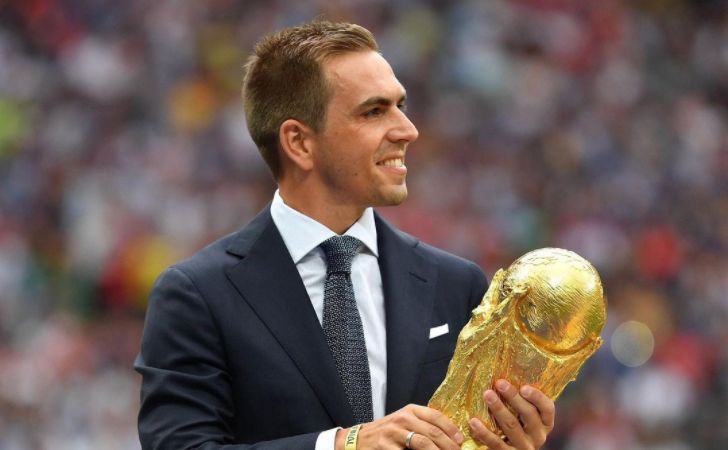 Philipp Lahm is a former professional football player who played as a full-back. He was captain of both Bayern Munich and the German national team.

Due to his pace, technique, stamina, and tackling abilities with excellent leadership skills.

He has been a key player to both teams throughout his career. During his captaincy, he led both teams to numerous title wins, including the 2014 FIFA World Cup for the German national team and the 2013 UEFA Champions League for Bayern Munich as a part of Treble.

Footballer Lahm retired from international football after the 2014 FIFA World Cup and retired from club football On May 20, 2017.

Footballer Lahm was born on the 11th day of November 1983, in Munich, which is the capital and most populous city of Bavaria. His father, Roland Lahm, was a former footballer at the district league and a telecommunications technician, while his mother, Daniela Lahm, was a youth leader at the Freie Turnerschaft Gern. Lahm has a sister named Melanie Lahm, who is a policewoman.

Likewise, Lahm started playing football from an early age at Freie Turnerschaft Gern, which is amateur football & athletics club. At the age of 11, footballer Lahm started his professional football joining the junior team of Bayern Munich. He was already considered a very talented player by his coaches and was a promising player from the beginning.

He won the Bundesliga youth title twice. On November 13, 2002, Lahm made his debut for the first team of Bayern Munich as a substitute in a 3-3 draw against RC Lens in the UEFA Champions League.

However, some reports suggested he completed his Bachelor’s Degree from The University of Arizona Global Campus.

On November 11, 1983, Lahm was born in Munich, West Germany. Lahm is 38 years old at the moment. His sun sign is Scorpio. He is physically strong with a height of 5 feet 7 inches (170 cm) and weighs around 62 kg. His religious beliefs are under review and will be updated as soon as possible.

Philipp Lahm is a private person who keeps a low profile outside of football. On July 14, 2010, he got married to Claudia Lahm. The couples have a son, Julian Lahm, and a daughter, Lenia Lahm.

He has not been previously engaged or married, but some reports suggested he was at least in two relationships before he met Claudia.

These are the only personal information about Lahm at the moment as he is a private guy, but they will be updated as soon as possible.

Lahm and his German national teammate Piotr Trochowski visited South Africa in advance to support the 2010 FIFA World Cup in June 2007. They also visited a local SOS Children’s Village and to take part in the Kick-AIDS event.

Philip Lahm-Stiftung was established by Lahm to support underprivileged children, is also an official ambassador representing “FIFA for SOS children’s Villages” and was an ambassador of 2007, 2008, and 2009 World AIDS Day.

Footballer Lahm  has also been involved in various campaigns against child abuse and sexual abuse.

On November 8, 2009, footballer Lahm was given the highest fine in the history of Bayern Munich . The fine was over €25,000) after giving an unauthorized interview in the Süddeutsche Zeitung. He criticized the transfer policy of the club and the lack of game philosophy and strategic planning.

Philipp Lahm Salary and Net Worth

Lahm is a shareholder of multiple companies. Some reports suggested he is a major shareholder at Schneekoppe, which produces nutritious products that help to lead a healthy life. Lahm’s Net Worth is $100 million as of 2021. His overall salary and net worth are from football, Endorsements, and business.

Lahm’s been involved in multiple documentaries. Deutschland. Ein Sommermärchen and The Team are two of the most popular football documentaries he’s been in.