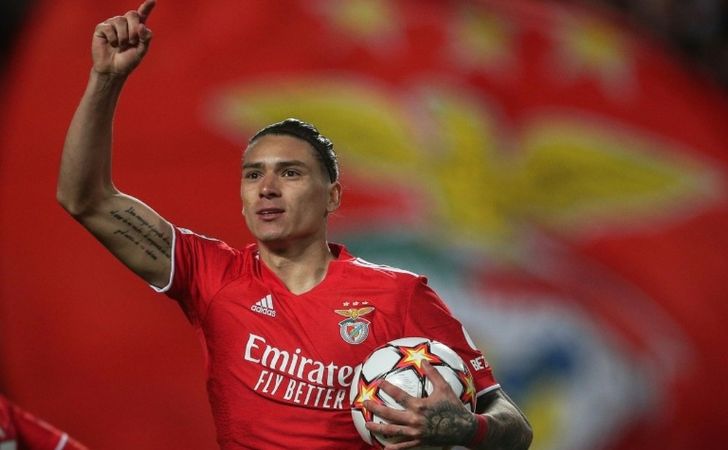 According to multiple reports, Liverpool signed an Uruguayan striker Darwin Nunez in a deal that could rise up to 100 million euros. Nunez becomes the second star to sign from the Portuguese League in two transfer windows. Earlier, Liverpool signed Luiz Diaz from FC Porto. There are various reasons why Darwin Nunez is overhyped.

Nunez has already broken the record when it comes to transferring. In 2020, his 24 million moves from Almeria to Benefica made him an expensive player to leave Segunda Division.

Meanwhile, Nunez helps Benfica by scoring 34 goals along with 4 assists just in 41 matches. In his 10 Champions League appearances last season he netted six-goal -including two against Liverpool.

This Uruguayan international goal involvement every 74 minutes made him one of the good strikers last season.

Jurgen Klopp has already won the race, and Darwin Nunez appears to be on his way to Liverpool. Consequently, replace Senegalese forward Sadio Mane, who is supposed to leave the club in the coming weeks. Bundesliga giant, Bayern Munich is interested in signing Sadio Mane. The Senegalese forward declined to stay in Liverpool next season.

Why Darwin Nunez is Overhyped?

This 22-year-old athlete is overhyped. Darwin Nunez has just been a one-season wonder with Benefica. According to our database, this athlete’s Fifa rating is just 79. This is far away less than Tammy Abhram, Calvert- Lewin, Youssef En-Nesyri, Danny Ings, and Vinicius Junior.

Previously, Nunez has not played in a big club like Liverpool. Playing in Premier League for the club which is competing for the title is going to put heavy pressure on Nunez. In football, the style of play changes over time as a manager develops a new style of play. Meanwhile, others strive to replicate if it is successful, and teams learn to play against it.

This Uruguayan International has not faced any Premier League Clubs that pose a serious threat, including those in relegation. This overpriced player has only faced Vizela, Estoril, Santa Clara, Braga, and other clubs.

More large teams are facing mid-table clubs like West Ham United, Manchester United, Leicester City, and Aston Villa than the current champion of Liga Portugal. For this reason, Liverpool can’t rely on him.

Darwin Nunez’s weakest stats are this crossing and dribbling. Premier League is way too much tough because of the physical nature of the League. Physically the player in the League is very solid. According to his FIFA rating, his heading accuracy is 76.

English football is a game of long balls, not a kind of tiki take. Zidane, Romario, Rivaldo, Messi, and Neymar these players never played in England. Darwin Nunez is the kind of player who preferred a possession-based type of football.

There are other experienced as well as wounder kid available in the market who costs less than Darwin Nunez. It wouldn’t be surprised to say Nunez is totally Overpriced.

Whenever it comes to price Nunez is overpriced. Nunez has fewer ratings than Youssef En-Nesyri who plays for Sevilla. If Nunez isn’t overpriced how much is Vinicius Junior worth? Junior is a Champions League winner. Additionally, Playersaga means the goal scorer in UCL Final 2021 is going to cost?

Can Darwin Nunez fill the Void?

After the arrival of Nunez, it is all surest the departure of Sadio Mane from the club. Without a doubt, no player can be the perfect replacement for Sadio Mane. He is always the kind of player every club wishes to have.

Mane arrived in Liverpool in 2016 from Southampton. However, Mane never failed to deliver a goal whenever Liverpool wants. Sadio has played  269 games for the club and netted more than 120 goals.

It would be difficult for Klopp’s Liverpool to lose a player like Sadio Mane. When you’re fighting against teams like Manchester City, Arsenal, Chelsea, and Manchester United, it’s not easy. Except for Liverpool fans, Darwin Nunez’s fanfare has caused far too much noise.

Can Nunez follow the footsteps of another Uruguayan Luis Suarez? What if this 100 million euro player turned himself like Andy Caroll? We have to wait and see if Darwin Nunez is overhyped.