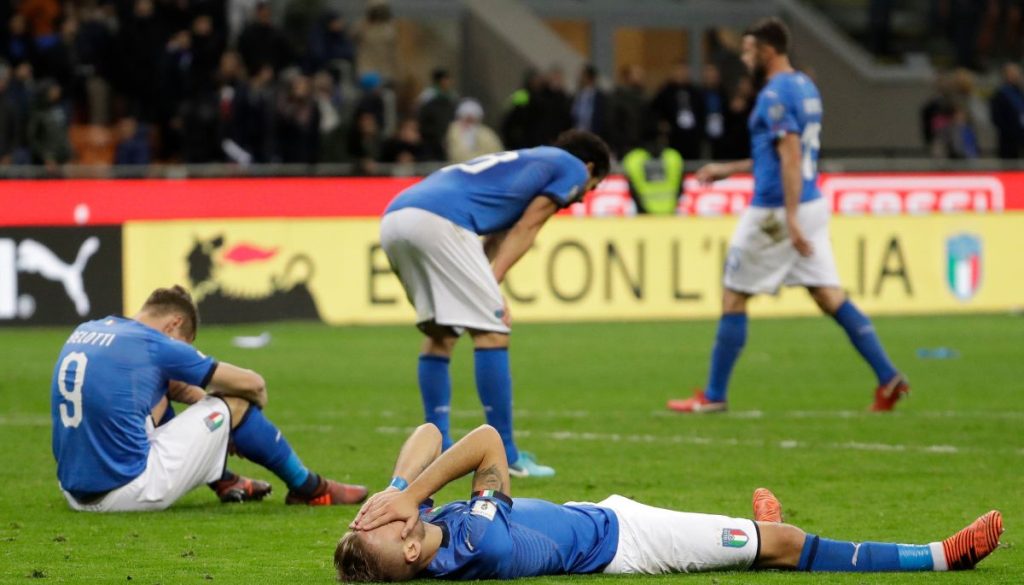 This article will be based on reasons why Italy didn’t qualify for the World Cup. Regarding winning the FIFA World Cup, Italy‘s name is always mentioned alongside Brazil and Germany. They have won the World Cup four times tied alongside Germany and second behind Brazil. Italy is known for its defensive low-block football.

They are the powerhouse in the footballing world. But in recent years, Italy has faced a downfall in its regime.

Italy has failed to qualify for the world cup two times in a row. Since their win in the 2006 FIFA world cup against France. They haven’t been the same team. They didn’t go past the group stage in the 2010 and  2014 world cup.

Reasons Why Italy Didn’t Qualify For The World Cup?

On 13 November 2017 worst thing that happened in the history of Italy, they failed to qualify for the 2018 FIFA World Cup. Italy was eliminated by Zlatan Less Sweden in a two-leg qualifier. The whole world was shocked after Italy missed its first world cup since 1958.

Buffon retired from international football after the heartbreaking elimination. In a post-match interview, he said-

“I am not sorry for myself but for all Italian football. We failed at something which also means something on a social level“.

World football criticized their failure of not qualify for the world cup. The media bashed them harshly, fans started to create a wave of chaos on social media.

Italian head coach Jean-Pierre Ventura was sacked by the Italian federation from the national duty.

The former Italian professional Roberto Manchini was appointed as the head coach of the Italian football team. Manchini’s regime begins with the team taking in the height of the football that was a disaster at the moment.

But, he went on to win a 37-game world record unbeaten streak from 2018 to 2021. It wasn’t possible by playing low-block defensive football which was the Italian football DNA.

Similarly, he changed the way of Italian playing from defensive football to free-flowing attacking creative football.

To play such football changes were required in the team. He brought a young and energetic footballer.

Players like De Rossi, Balatollie, and Zappacosta were replaced by young legs like Verratti, Immobile, Barella, etc. which create a balance of young and veteran players.

Italy rebuild the team and went on to win the Euro 2022 in a dominating fashion. Italy was a dark horse going into the European tournament.

They scored the most goals in the tournament (13 goals) tied with Spain and had the most attempts (128) and were defensively sound with the most tackles (99) and balls recovered (291).

The quality of football before and during the tournament was sensational, smooth, and free-flowing.

After winning the European Championship their plan was to qualify for the World Cup happening in Qatar. Roberto Manchini made a statement in a press conference during a world cup qualifying match-

“The objective is not to go to the world cup, but to win it”.

This is when the tied changed for Italy, from winning the European Championship to missing out on the World Cup for the second consecutive time.

Despite, their form and Manchini’s ambition to qualify for the World Cup. Italy suffered a major injury to key players. Especially, Spanizola who was their key player to lead Italy’s attack had to miss out and luck was also not on their side.

Their most reliable penalty taker Jorginho had the best penalty record in the world and missed not only one but two penalties against a match decider against Switzerland. Which made them cost a straight World Cup qualifying chance.

They had to book their chances of playing in the world cup via plays-off. Italy had to face Cristiano Ronaldo‘s Portugal in the play-off final.

But before they managed to face them, Italy collapsed shockingly against North Macedonia. A 92nd-minute winner from Aleksandar Trajkovski scored the winning goal in the dying moment to kill the hope of Italy’s chance.

Italy had never lost a world cup qualification game on home soil until North Macedonia spoiled it. Italy had played 51 games, 44 wins, 131 goals, and only 24 conceded. The whole world thought of one possible winner that day but Macedonia did something nobody believed.

Italy had 30 shots over 10 of them were on target. While North Macedonia was efficient with scoring in just 5th and final shots.

Whatever happens after this, the second world cup absence will never be forgotten and one man will be always hunted for the rest of his life- Jorginho.

Redemption For The Next World Cup

With most of the key players over 30 years of age, whatever history happened at Palermo(Italy), Nezzurri must rebuild from here on with or without Roberto Manchini. The football must continue at the end.

Follow us and get the latest news delivered to your timeline!
Previous ArticleManchester City vs Borussia Dortmund : Money Against PrideNext ArticleRoger Federer Retirement: The Tennis Legend