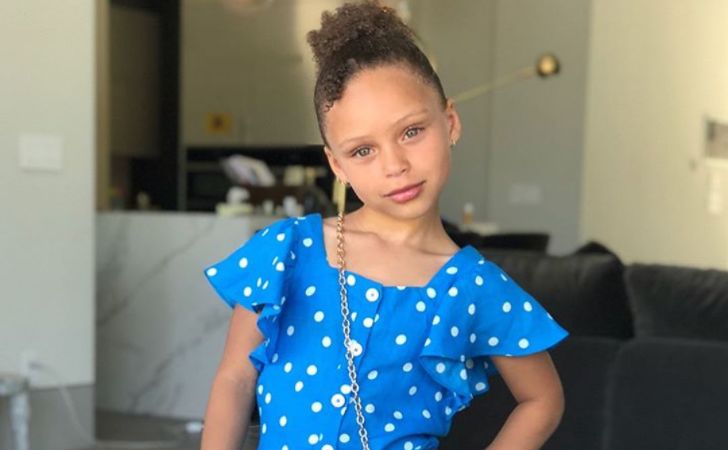 Riley Curry is an American child model and the eldest daughter of Stephen Curry, an NBA basketball player for the Golden State Warriors, and Ayesha Curry, a Canadian-American actress, famous chef, cookbook author, and television personality.

Riley initially made headlines in May 2015, when she was compelled to attend a number of her father’s post-game news conferences. With each performance after then, she has continued to steal the show.

Riley, who is renowned for flaunting her dance abilities on her birthdays, celebrated her 3rd birthday with grace. Additionally, she was seen dancing to Silentó’s ‘Watch Me (Whip/Nae Nae)’ .

Things don’t end here as she danced to #InMyFeelingsChallenge by dancing to Drake’s song, ‘In My Feelings.’ for her 6th birthday.

Who are Riley Curry parents?

Riley’s father, Stephen Curry is a professional basketball player in the National Basketball Association for the Golden State Warriors. Ayesha Disa Curry, is a Canadian-American actress, businesswoman, and whatnot. She specializes more in cooking and hosting the TV shows.

She began hosting her own show, Ayesha’s Homemade, on Food Network after guest roles in various television shows and films.

Riley is the first child of her parents and has a brother named Canon and a sister named Ryan. Surprisingly, all three siblings were born in the same month.

Her grandpa, Dell Curry, was a professional basketball player in the past, and her uncle, Seth Curry, is a current NBA player for the Portland Trail Blazers. Her mother uploaded photos from her unicorn-themed birthday celebration.

It included a unicorn bounce house and a unicorn-themed tea party area, on Instagram on her daughter’s 5th birthday.

Riley Curry, then two years old, captured the hearts of basketball fans all around the world. At the time when she made an appearance on stage during one of her father’s post-game news conferences on May 19, 2015 things went cute.

She was adamant about sitting on her father’s lap, which he had to allow gracefully.

The kid even requested him to “be quiet” with a lovely laugh that took the attention of her father while he answered questions from the media.

Riley rushed on stage during another of her father’s press conferences, this time to take over the microphone and perform sections of Big Sean’s ‘Blessings,’ which features Drake, in front of the media.

The NBA published a new video of the event on their official social media platforms, and it quickly surpassed 2.5 million views. Within days, 500,000 people had tweeted about her, and her on-stage performances had been turned into memes and GIFs.

Fans have learned to expect her spirited displays during and after games, just as they have come to expect frequent Warriors victories.

Riley was born under the sign of Cancer. On the positive side, Cancer is a devoted, protective, insightful, and loving disposition. Cancers are known for being overly sensitive, temperamental, and vengeful. Riley is a kind and modest youngster.

Curry is in good physical shape. Riley’s body dimensions are unpredictable, as we all know because she is getting older.

Curry is a petite young lady who is still maturing. She is around 4 feet 5 inches tall. Riley is also 47 pounds.

Curry, on the other hand, will undoubtedly grow up to be both attractive and stunning. Riley is a stunning young woman with hazel eyes and wavy brown hair. Riley’s dress size and shoe size are not available on the Internet.

Riley Curry is just ten years old. Meanwhile, she has been in high school at this point in time. Eventhough, the exact name of the school is not known she is studying in some local high school.

At times her mother is seen taking videos of Riley going to school. This does make the fans curious to know more. However, the parents have kept the kid out of spotlight so the proper information isn’t known.

Riley’s just eight years old, and she’s far too young to build any type of attachment. Because she is still a youngster, it is premature to forecast her partner. We wish Riley well in finding the caring and gorgeous boyfriend she deserves in the future.

Riley Curry may appear too little to court controversy and too charming to raise eyebrows, but after she regularly interrupted her father’s news conferences, several voiced worries that she was too comfortable to disrupt major events like press conferences and chastised her parents for permitting it.

Following this, her mother responded, emphasizing that it was necessary to allow children to be children and that being a parent, especially during a public occasion, was perfectly acceptable.

When you are the kid of Stephen Curry everything you do becomes the news. Riley Curry press conference was something that made good headlines. The cute little 10-year-old was seen singing at the press conference.

Sitting in the proximity of her father, Riley was seen singing the Blessings song by Big Sean. This particular press conference took place in 2015 which made the news and everybody was left in awe.

To the surprise of many, Stephen Curry however wasn’t too impressed. Stephen adds that he wants his kids to live a normal life, and spend time like them rather than everything being covered by the media. Not only that he also felt guilty for exposing her to the media and spotlight so early.

Like every other protective father, Stephen took it to himself stating the fact that he wanted Riley to enjoy her own success and not get too carried away by the success of her father. Whatever it might be the singing by Riley was something too cute to ponder on.

Riley may, however, make money as a child model and as a result of her celebrity. However, no information about her earnings is accessible.

Riley lives with her parents. Curry has ventured into the world of infant real estate and now owns a playhouse that is cooler than most genuine homes.

It’s a far cry from the playhouse she was spotted in roughly 16 months ago. This playhouse makes the previous playhouse appear like a play hovel.

She is loved and praised by many for her cute childish activities. Riley rose to fame through social media. Likewise, it is her parents’ popularity that makes her famous.

Riley’s exuberant personality emerges more as she grows older.  Moreover, horseback riding, and helping in the kitchen is what she loves. This little kid also loves to try out different dresses that suit her.