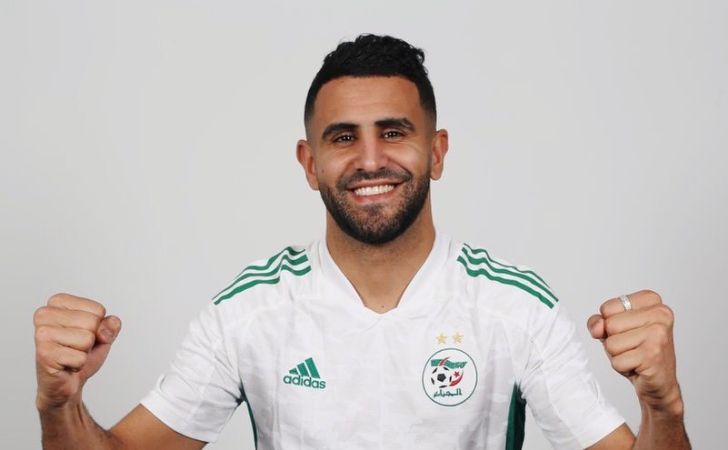 Algerian football star Riyad Mahrez is one of the excellent dribblers and prolific winger in football. He is also sometimes nicknamed “Algerian Robben” due to his ability to inside his left foot. Mahrez currently plays for football club Manchester City after his transfer from Leicester City in 2018. Mahrez has played in many major tournaments with different clubs like Leicester City and Manchester City. He is a skilled player who is also comfortable as the striker or central forward, but plays mainly as the winger. Riyad has scored many goals and assisted his teammates in major competitions like the UEFA champions’ league and the Africa cup of nations.

He has represented his national team Algeria for a long time, earning his 70 international appearances until after his debut in 2014. Similarly, Riyad has won multiple titles and trophies with different European clubs he has played with. Mahrez is considered one of the prolific wingers in this sport due to his ability to cut inside the foot, dribbling quality, and finishing abilities during the match. This biography on Manchester City’s football star, Riyad Mahrez, covers important moments from his early life till date.

Sometimes nicknamed “Algerian Robben”, Riyad Mahrez was born to former father Ahmed Mahrez and mother, Halima Mahrez. His father was originally from Algeria while his mom was from France. He is one of the four child of his parents and he was born in a middle class family in Sarcelles, France. He has a brother named Wahid Mahrez and two sisters whose names are Dounya Mahrez and Innes Mahrez. Riyad father passed away when he was just 15 years old, so he focused more on football.

Playing very brilliantly in his early childhood days, he grew up playing football with his neighbor friends. At the age of twelve, Mahrez joined the ranks of the local football club AAS Sarcelles and in the year 2010 he joined Le Havre AC football club’s academy. He played with number 26 on his jersey during his days at Leicester City who is assigned the same number 26 at his current club Manchester City. Similarly, he uses Mahrez as his name in his club and his national team kit.

The Africa cup of Nations winner Algerian footballer was born on 21-02-1991, making him 30 years old. (As per 2021) He follows Islam religion and his Zodiac (horoscope) sign is Pisces. According to Riyad’s mother, he always played football with his friends and brother in their neighborhood.

Delighted by his talent, his father took him to the local clubs in France, soon recruited in the junior team of football club Le Havre AC. Since then Riyad has been playing at a high level, making him one of the best players in modern football.

Mahrez is not very muscular but he is pretty fast with the ball on his feet. He is 5.10 feet tall and can run very fast in the match. Mahrez has evenly matched weight for a professional footballer, as he weighs around 148 pounds (69 kilograms) at average. He has dark brown colour eyes and black color hair. Riyad is very professional and takes very care of his body, training, and diet. He has a chest span of 37 inches and a waist of 31 inches. Likewise, his athletic biceps measure 14 inches. Similarly, Mahrez uses a shoe size of 10 (US).

Riyad Mahrez Salary and Net worth

Manchester City football star Mahrez is believed to be worth around 20 million dollars to date. He has played for different European clubs like Leicester City and Manchester City.

Who is Riyad Mahrez Wife?

Footballer Mahrez was married to a woman named Rita Johal, but the couple are now divorced. Rita is a model and social media influencer by profession. He also has two daughters with his ex-girlfriend named Inaya Mahrez and the other daughter’s name is unknown.

He is currently engaged to another model whose name is Taylor Ward. The couple announced their engagement through their social media account. He has a very fit body and he also spends his significant time in the gym, and warm up exercises. Riyad takes very care of his body, training, and diet, making him one of the very professional players in this sport.

The Africa cup of Nations winner Algerian international is a prolific and skilled winger in football, having many titles and trophies in his collection in his career. His precise shooting, passing and dribbling abilities make him one of the best wingers in European football. As per his coach Pep Guardiola, Mahrez can get less injured due to his non-muscular body.

Riyad has won several major trophies like the English premier league title and the Africa cup of Nations tournament. In his professional football career, he has played mainly as the winger, striker, and sometimes as Left and Right midfielder. Mahrez is also renowned as a fast dribbler and precise finisher in football.

Riyad Mahrez is also quite active on social media like Facebook and Instagram. Footballer Mahrez keeps updating the fans about the matches, and, his announcements. Similarly, Mahrez posts pictures of his vacations in different places, family, and his teammates, earning him substantial fan followings worldwide. He uploads pictures with his cars, watches and children on social media.