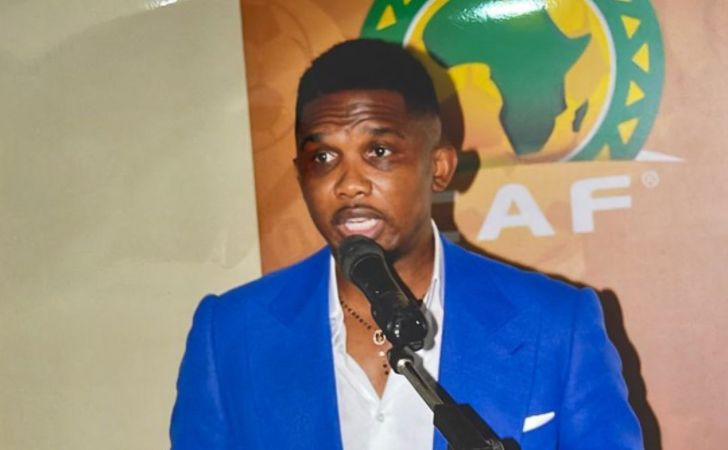 Former Barcelona and Inter Milan football player Samuel Eto’o is considered one of the greatest players in this sport. Having established himself as an iconic footballer of this generation, Eto’o is currently the chairman of the Cameroon football association. The UEFA champions’ league winner has played in different major tournaments with elite European clubs like Mallorca, FC Barcelona, and Chelsea in his professional football career. Cameroonian international footballer Eto’o is the only player in history to win back-to-back UEFA champions with two different football clubs. He achieved this record when he played for FC Barcelona and the Italian football club Inter Milan.

Samuel is a versatile player who can play excellently even as the winger but his preferred position in his prime was central forward and striker. Eto’o also has played for his national team Cameroon for 118 times after making his international debut back in 1997. Samuel Eto’o is widely regarded as an excellent player due to his precise finishing, shooting ability, and versatility during the game. This biography on former professional footballer Samuel Eto’o covers some of the important moments from his early life.

Former Cameroonian international footballer Samuel Eto’o was born to their father David Eto’o and mother, Christine Eto’o. Both his father and mother are natives of Cameroon. Samuel’s father worked as an accountant while he was growing up. This footballer was born in a middle-class family in Cameroon called Douala. Eto’o has two brothers and three sisters in his family apart from him. His brother’s names are David Eto’o and Etienne Eto’o and they are also professional football players. Eto’o also has three sisters: Pauline Eto’o, Mado Eto’o, and Sidonie Eto’o.

Samuel Eto’o initially got into the team of Kajdi sports academy, his hometown club in Cameroon. Even though he tried to play for the French club when he was young, he was rejected due to improper documentation. He played with legendary number 9 on his jersey at Mallorca football club, who wore the same number 9 at his successful destination FC Barcelona. Likewise, he used Eto’o as his name in his club and his national team kit during his career. Starting his early career as a winger, the former footballer has excelled at many positions in the attack and midfield.

Cameroonian all-time top scorer Samuel Eto’o was born on 10-03-1981, making him 40 years old. He follows Islam as the religion and his Zodiac (horoscope) sign is Pisces. Eto’o is very well renowned for his technical ability and control of the ball. He had very short hair and sometimes he was bald in his early playing career with FC Barcelona and Inter Milan. Samuel Eto’o is also regarded as the kindest player by the football fans as he once sponsored for the food of his then football club Mallorca’s supporters.

Samuel Eto’o has an athletic body and he stands 5.11 feet tall. This footballer has evenly matched weight for a professional footballer, as he weighs around 165 pounds (75 kilograms) at normal. He has dark brown colour eyes and black colour hair. Samuel is very professional and takes very care of his body, training, and diet even though he is already retired. Likewise, Eto’o uses shoe size of 11 inches (US). We currently do not have any information about his body measurement. We will update the information very soon.

Samuel Eto’o Salary and Net worth

According to multiple financial websites, Samuel Eto’o is worth around 90 million dollars to date. He played for many richest football clubs like FC Barcelona. Inter Milan and Chelsea, so a major part of his net worth comprises football club salary and bonuses, endorsement, and sponsorship deals. He has made 118 appearances for his national team Cameroon after making his international football debut in 1997. Eto’o has also earned a significant salary playing for his national team.

FC Barcelona signed Samuel Eto’o from the rival Spanish club Mallorca where he earned a massive salary and bonus. Eto’o also played for Inter Milan and Chelsea in his prime playing days, making a handsome income playing for those elite football clubs. This salary and net worth makes him one of the highest-paid former football players. Samuel Eto’o is also a proud owner of the finest expensive cars in his collection like Bugatti Veyron. Cameroonian former footballer Eto’o also owns a private jet that costs millions of dollars.

Who is Samuel Eto’o Wife? | Children

Considered one of the legendary African strikers of all times, Samuel Eto’o t is married to his girlfriend, whom he had known for a long time. Her name is Georgette Eto’o and she was a hairdresser before she gave up her profession. The couple fell in love with each other while Eto’o was still an amateur footballer. They got married in 2015 and the couple have been inseparable ever since. They are parents to two daughters, Sienna Eto’o and Lynn Eto’o.

Eto’o also has a son and two daughters from other women. His son’s name is Etienne Eto’o, and his daughter’s names are Annie Eto’o and Maelle Eto’o. Samuel has a huge following on his social media account like Instagram, Facebook, and Twitter. Being a former professional football player, he still spends his significant time in gym and training even at 40. He takes very care of his body, training, and diet, making him one of the remarkable professionals in this sport.

The four-time African player of the year award winner is considered one of the best strikers in football. He is a versatile footballer who has won many major trophies with different football clubs. His finishing, shooting skills, and ball heading ability make him one of the best football strikers. He could play excellently as the central forward, striker and also as an attacking midfielder according to the team’s need.

Eto’o has excellent shooting skills from the inside and outside the box. Samuel Eto’o was excellent at his prime playing days, which helped him win the Africa cup of nations two times with his national team Cameroon. His precise finishing ability has helped him score many goals in international and club tournaments. Eto’o was a poacher finisher on one vs one situations against the opposition goalkeepers.

Samuel Eto’o is also quite active on social media like Instagram and Twitter. In addition, he keeps updating the fans about the matches, and, his announcements. Samuel posts pictures of his vacations in different places, family, and his teammates, earning him huge fan followings worldwide. He uploads pictures with his cars, watches and children on social media.

Footballer Samuel Eto’o is a retired professional footballer and a former manager at Turkish football club. He does not have a player rating in FIFA 22 as he is not playing for any club or the country anymore. Eto’o, however has-icon FIFA cards in FIFA 22 game. He has a 90 overall rating and striker in his FIFA 22 prime icon card as his preferred position. Being a striker, he has been given the highest pace (91) and shooting (91) out of other attributes.