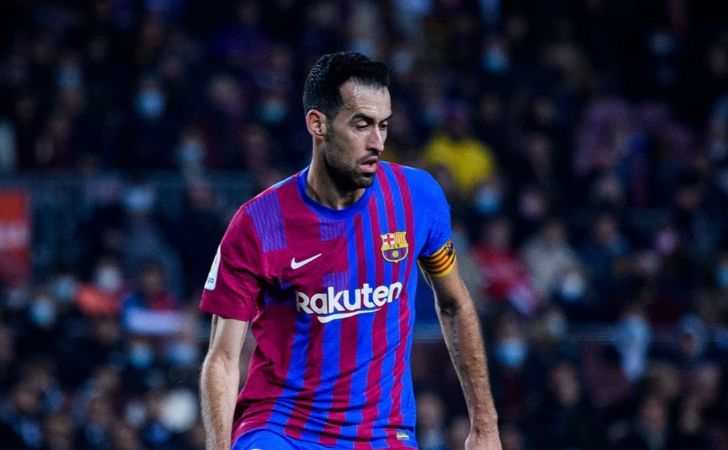 Sergio Busquets Burgos is a  Spanish player globally known as Sergio Busquets. Primarily he plays as a center midfielder for the club and the country. Also, have the ability to play as a center defensive midfielder. After, Messi’s departure Sergio is the current captain of Barcelona. He has also been captaining Spain’s national team.

Thoroughly, Sergio is known for his great stamina and his art of defense. Along, with the ability of a holding midfielder. This athlete joined the club La Masia at the age of 5 and now leading the club, he has always been a great leader. This youth product of La Masia has won all most every trophy for the club and country.

This Spaniard wearing jersey number 5 for both club and country. Additionally, Busquests has also represented Barcelona and Spain in various age stage games. Hence, Sergio is one of the most successful athletes in football history.

The current captain of the Spain national team and Barcelona was born on 16 July 1988. Sergio Busquets was born and raised in Sabadell Spain. Before joining Barcelona, Busquests joined a local team CD Badia Valles in Spain. At that time he was only seven years old.

Significantly, Busquests is also known as one club man. Before joining the Barcelona youth team, this athlete played for different clubs.  In 1996 he spent 3 years with Barbera Andalucia. Similarly played for Lleida in 1999, and for Jabac Terrassa for some years.

Busquets joined Barcelona in 2005 when he was just 17 years old. His hard work, dedication, and skill were amazing. Sergio came in lame light when he scored 7 goals in 26 games in his second spell at the Barca youth team.

Charles Busquets and Loli Busquets is name of Sergio Busquets’s father and mother. Sergio’s father Charles was a professional goalkeeper, who played for the Barcelona team in the 1900s. Therefore, Sergio is the second generation footballer in his family.

Sergio was hardworking and dedicated from his childhood and started his football career at 7 years of age. As a result, today he is considered one of the best defensive midfielders of this generation.

In his early days, this athlete grew up playing football with his brother Aitor Busquets. Charles wanted to make Sergio a great footballer, he wanted this athlete to follow in his footsteps.

Ultimately Sergio used to train with his dad in his childhood. He was always fascinated with football, as his dad was a football player. His dream of becoming a pro football has been successful, thanks to his dad for enormous efforts.

Sergio Busquet was always inspired to become an athlete. Busquets started playing early at 7 years of age. He left his home to pursue his dream of becoming a professional player.

Most of his schooling time was spent boosting, and growing himself. We know how much effort and dedication has to be put in to become an athlete like Busquets. Hence, the journey of becoming a World cup, UEFA Champions League, and  Euro Cup winner have not been easy if it wasn’t for Sergio in the squad.

This wouldn’t have been possible if he hasn’t put enormous efforts from an early age.

Sergio didn’t pursue education going to the school as he spent those time becoming the best player. Besides this, there isn’t much information available about his education. Playersaga will update the information as soon as it becomes available.

This athlete was born on 16 July 1988. Currently (as of 2022) 33 years of age. In addition, Busquets holds Spanish nationality. Likewise, Sergio has represented the Spanish national team at different age levels.

After, the departure of Lionel Messi from the club, La Masia product Sergio has been captaining Barcelona. A Spaniard is 6 feet 2 inches (189 cm) tall and weighs 76 kg ( 168 lbs).

Busquet’s parents were from Spain. They hold the Spanish ethnicity, and so do Busquets. When it comes to religions Busquets have been following Christianity. His sexual orientation is straight. consequently has two sons.

This defensive midfielder is tall and likes to be seen in simple haircuts on and off the pitch. A black hair color athlete has a back color eyes. A cancer zodiac sign player is soft, nurturing, loving, and highly sensitive.

Most of the time Busquets keep himself in the swimming pool and gym. His physique measurement is:

The defensive midfielder’s dress size and shoe sizes are 10 US and  12 US respectively. Besides this, his favorite color is Blue and likes to eat Italian food.

This Spaniard is the current captain of the Barcelona and Spain national teams. Playing as a defensive midfielder, his team is relying on him. By the time, this athlete has played more than 600 games.

Meanwhile,  this player has an overall rating of 84 in FIFA 2022. This jersey number 5 player preferred to shoot with his right foot while playing in the central midfielder position.

Based on the database of Playersaga, his rating on FIFA 2022 are listed below:

His Ball controlling, tackling, interceptions and stamina is best, hard to match this level of consistency. At the same time, his long passing skills, crossing, and finishing are weak stats.

In the background, for every successful man, there is a hand of a woman like Elena Galera Moron. In 2013, Sergio meet this beautiful, charming and supportive lady, Elena Galera Moran.

Sergio is also called a ‘one-time club man’ after spending more than a decade in the Barcelona football club. He belongs to Spain and lives in Spain. Whenever this 6’2″ player gets time, he spends most of his time with his family.

Born in a high-class family, father Carles was a professional footballer. similarly, mother Loli Burgos was a housewife, she take care of two sons Sergio and Aitor Busquets.

Elena’s profession is nursing assistant. She is also a social media influencer and has millions of followers on Instagram. It is reported she has accumulated more than a million dollars throughout her nursing career.

Sergio and Elena are in a long-term relationship but haven’t married yet. Nevertheless, the couple is very happy and spending quality time together since meeting in 2013.

This couple has two sons, Enzo, and Levi. They welcomed Enzo (their first son) on 8th March 2016. Levi’s date of birth is under review. Playersaga will update it soon.

Sergio has always been loyal to his partner Elena. One of the best moments for this Spaniard is during trophy celebrations. Generally, this couple love dogs and have two bulldogs namely Minnie and Lily.

In conclusion, it is normal for Busquets’s family to spend a vacation with family members and dogs.

Net Worth? Is Sergio Busquets Millionaire ?

According to the multiple reports, Leader Sergio has a net worth of $45 million including all his property. At this time, receiving a salary of 20 million euros at Barcelona.

This defensive midfielder has earned millions of euros and living the life he has always dreamt of. After crunching the digits, Busquets is earning 2,289 euros per hour. Which are 38 euros per minute.

In fact, Serio Busquets was a millionaire at the age of 30. To sum up, it takes 38 years for an average man to earn as much as money Sergio makes in one month. Consider, one of the richest football players in the world.

In professional matches, Sergio is seen wearing Nike boots a personal sponsorship from Nike. He collects $1-$5 million from the endorsement. His teammates put him the nickname Octopus for his unique ability to mark opponents and intercept the ball.

This Spanish giant has Manson in Barcelona city of Spain, where he has been living with his family for more than 2 decades. His love for Audi is immense, he loves driving his car, Audi.

In a long run, he is staying at Barcelona putting the release clause of 500 million euros. Despite the fact, that his current market value is 10 million euros.

A long-time serving Barcelona key player has millions of followers all over the world. Especially, many youths are inspired by the lifestyle and success he shared on his different social media platforms.

In April 2018, Sergio and Elena announced giving birth to their second child.  We can find beautiful pictures Sergio shared on his social media with his family and teammates.

Career | Why Busquets is a one-club man?

Started a journey of becoming a great defensive midfielder playing football with a local team CD Badia del Valles. After spending his spell in Barbera Andalucia and Lleida. Later, in 2005 he joined the youth team of Barcelona.

His first goal was against Athletic Bilbao in a 2-0 on 7th March 2009. Sergio has the ability to dispose of the opponent in the midfield. For that reason, manager Pep prepared him to replace Yaya Toure from the squad.

Sergio Busquets, Xavi, and Iniesta formed the deadliest midfield trio and dominated the whole of Europe. Undoubtedly, this trio is the best in football history representing the same club and the same country.

On 24 November he played his 500th game for Barcelona which was against their rival Athletico Madrid. In the same, year on 11 December he made his 100th Champions League appearance against Tottenham F.C.

In short, he has appeared in more than 450 games for the club and 130 games for the country. This Octopus nicknamed player has scored 13 goals for Barcelona and 2 for Spain’s national team.

It is without doubt Busquets is a one-club man, recruited in 2005 and playing for more than a decade. Indeed, this maestro is loyal.

Hardly, there is any tournament he hasn’t won yet. Listing titles won by this Maestro.

Sergio was close with his maternal grandfather. In his memories of him, he made his left hand tattoo. After translation, this Arabic tattoo means “A thing for you, the life in my country”.

In an interview, Xavi mentioned Sergio Busquets is one of his closest mates on and off the pitch.

He has two sons Enzo and Levi.