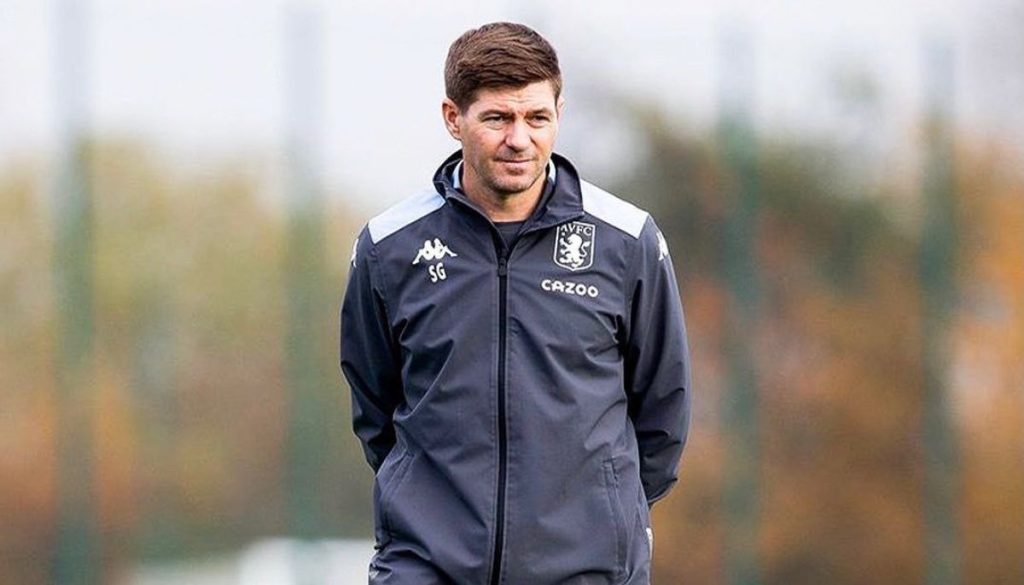 Legendary English former midfielder Steven Gerrard is famous for his leadership quality and consistency in his old football playing days.

Gerrard is currently working as the football coach for Aston Villa after he retired from football. He is famous as one club player since he spent his professional football career playing for the English football club Liverpool.

Likewise, Gerrard played with the likes of other legendary footballers like Xabi Alonso and Michael Owen while he was with Liverpool. His fans were also nicknamed “Captain Fantastic” in his professional football playing days.

Similarly, he was comfortable playing as an attacking midfielder and winger, but his natural position was a central midfielder. Steven Gerrard has played for his national football team long after making his international football debut in 2000.

He has won many major trophies in his career, like the UEFA Champions League and the UEFA Europa League playing for Liverpool.

In this post, we have covered the biography of former English football player Steven Gerrard and his professional and international career details.

English football manager Steven Gerrard was born to their father, Paul Gerrard, and his mother, whose name is Julie Ann Gerrard.

He suffered a defect on his feet while he was still a kid. However, his parents treated him on time so that their son may not have any future problems.

Steven was born in England, called Merseyside. He also has one brother as his siblings, whose name is Paul Gerrard. Steven and Paul Gerrard have been very close since their early childhood days.

Steven Gerrard was Everton’s fan in his early childhood days. But while playing for Whiston Juniours, he was spotted by Liverpool Scouts. At the age of nine, Steven joined the Liverpool Academy.

Likewise, He even gave trials for Manchester United football club, so Liverpool may be pressured to give him a youth football academy contract. The English former midfielder said the above statement in his autobiography.

The P.F.A. young player of the award winner English former midfielder, Steven Gerrard, was born on 30th May 1980, which makes him 42 years old now.

Similarly, Steven is a Roman Catholic by religion, and his Zodiac (horoscope) sign is Gemini. In his old playing days, Gerrard was nicknamed “Captain Fantastic” by his fans.

Gerrard has an athletic body and stands 6 feet tall at present. Similarly, he has evenly matched weight for a former professional football player, weighing around 185 pounds (84 kilograms).

He has blue color eyes and blonde color hair. Steven Gerrard has a chest span of 40 inches and a waist of 31 inches. In addition, his athletic biceps measure 13 inches and use shoe size 11 (U.S.).

Steven Gerrard’s Net Worth and Salary

Steven Gerrard has a net worth of $90 million. Gerrard spent more than 17 years playing for Liverpool after making his professional football debut in 1998. During his last season in Liverpool, he used to earn $240,000 per week.

Similarly, he has also earned a salary playing for the L.A. Galaxy in M.L.S.

After his playing career, Gerrard joined Rangers to be the football coach. During his time at Rangers, he has a salary of £2.5 million a year.

Currently, Steven is working as the football coach for the English football club Aston Villa. He has a salary of £ 5 million a year at Aston Villa. This salary is the highest for any manager in Aston Villa Club history.

He has earned millions from brand endorsement and other sponsor deals.

The Englishman’s other income is from the royalties of the book sold. He has made a $2 million contract with the book publishing company for his autobiography Gerrard: My Autobiography.

In addition, the endorsement deal with Adidas Company also had a major part in the increase of net worth of Steven Gerrard. He was featured in Predator series boots of Adidas.

His earnings and current net worth make him one of the richest former English football players. Former Liverpool midfielder Steven Gerrard owns many finest cars such as Range Rover and Aston Martin.

Steven Gerrard owns a lavish and beautiful home in Formby. He has a mansion in Formby, which he bought for $4.5 million. The house has 3 living rooms, seven bedrooms, a garden, and a swimming pool.

Similarly, Steven also owns a house in Merseyside, England. He bought it for $850,000, which he used to rent earlier.

In addition, he has also invested in a retirement house. The house is worth $4 million and has 5 rooms.

Who is Steven Gerrard Wife?

English international former midfielder was in a relationship with different women in the past. However, there was only one woman who won his heart. Gerrard is married to his long-time girlfriend, Alex Curran.

Steven and Alex started dating in 2002. After five years, eventually, in 2007, they got married.

Alex Curran is an English model, Fashion columnist, and former nail technician. Alex’s full name is Alexandra Curran, and was born on 23rd September 1982. Alex is 39 years old as of 2022.

The lovely couple is parents to four children together and three of which are their daughters, and the other child is their son.

The former English midfielder has also earned experience as a football manager. Steven Gerrard was the football coach for the Scottish football club Rangers for three seasons.

He won the Scottish league title and other individual awards for Rangers. Gerrard is currently the manager of the English football club Aston Villa. He also won his first premier league game with Aston Villa football club.

The champions’ league winner former English midfielder Steven Gerrard is one of the most versatile football players to have graced Liverpool football club. His precise finishing and long-distance shooting were of quality. His leadership qualities led Liverpool to various trophies.

Similarly, Gerrard had a brilliant first touch and was a football pitch leader. Steven Gerrard has won several European trophies like the UEFA champions’ League, UEFA Super Cup, and UEFA Europa League in his career playing for Liverpool football club.

Likewise, He has played mostly as the central midfielder and an attacking midfielder in his professional football career. Gerrard was named “Captain Fantastic” for his leadership quality in his Liverpool days.

Similarly, Gerrard is a family man and often spends time with his children and his wife. Here are his social media accounts:

The multiple European title winner, a former English footballer, is already retired from football. This English man does not have a player rating in FIFA 22 as he is not playing for any club or country.

Gerrard, however, has icon FIFA cards in FIFA 22 game. The English football manager has an 89 overall rating and central midfielder as his preferred position in his FIFA 22 prime icon card.